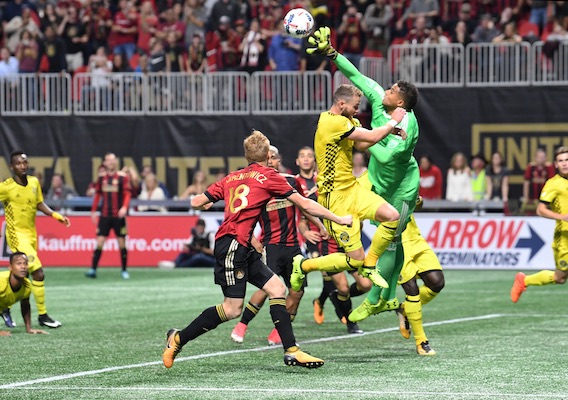 Major League Soccer's single-elimination round is complete, with New York, Columbus, Vancouver, and Houston advanced to the conference semifinals. Brian Sciaretta shares his insights on these matches.
BY Brian Sciaretta Posted
October 28, 2017
11:00 AM

THE FIRST ROUND of the 2017 Major League Soccer playoffs are in the history books and while none of the games were great, there were several great performances. Vancouver and New York stood out while Kansas City looked tired and in need of a change. What will be remembered, however, was the goalkeeping performance in front of a huge crowd in Atlanta.

Steffen shines in the spotlight

The biggest story of the first round of the playoffs is that Zack Steffen lived up to the lofty expectations. After playing so well down the stretch for Columbus, Steffen was masterful against Atlanta and proved to be the difference. Not only did he keep Atlanta and its potent attack scoreless over 120 minutes, he then made two big saves in the shootout to send Crew SC into the Conference Semifinals where it will face New York City FC.

Already playing with the emotion over a pending move to Austin, Texas, Steffen is turning in the types of performance that could lead to an extended playoff run.

Also clear: Zack Steffen clearly deserves a shot to compete for a starting spot on the United States national team, which desperately needs a new group of goalkeepers after the Tim Howard, Brad Guzan, Nick Rimando trio has been in the mix for a generation.

Bill Hamid and Ethan Horvath are strong contenders as well, but Steffen’s athleticism and quickness are first rate and his decision making has improved mightily over the season.

After watching the New York Red Bulls pound Chicago 4-0 on Wednesday night it became clear that this team us much better than a typical No. 6 seed. There is a lot of talent on Jesse Marsch's squad—and a healthy Daniel Royer makes a huge difference.

Royer was MLS player of the month in July but missed a lot of time after suffering an injury in August. While he was away, the Red Bulls struggled and nearly missed the playoffs. The Austrian returned in the final weeks before the playoffs and is now hitting his stride. Against Chicago he scored a very nice goal and helped overwhelm Chicago’s defense.

Toronto FC is up next for the Red Bulls and it will be fascinating to watch these two teams square off.

The opening round loss wasn’t the only bad news for the Chicago Fire. In the second half, teenage midfielder Djordje Mihailovic was forced out of the game with a torn ACL. It was a brutal injury that should keep him out until the middle of 2018.

Mihailovic was part of Chicago team that had done very well to rebuild in 2017 and he fit very well into Velkjo Paunovic’s plans. The U.S. youth international also looked poised to perhaps be part of January camp this winter with the national team. Now that will have to wait.

The best team performance of the opening round went to the Vancouver Whitecaps, which pounded San Jose 5-0 on Wednesday night. It was a lopsided win as the home team curised into the Western Conference Semifinal where it will face the Seattle Sounders.

Seattle might be the favorite in this matchup but Vancouver has a wave of momentum despite having a mediocre +1 goal differential on the season. Right now everything is clicking for Carl Robinson’s men. When this team is on it can score goals at a lethal pace.

On September 24, Sporting Kansas City defeated the LA Galaxy 2-1 for its second win in a row. That was the team’s final win of the season and it had just two draws in its final six. On Thursday, it was eliminated after a boring 1-0 extra-time loss to Houston.

Little has gone right for Peter Vermes and his team since trading Dom Dwyer. Heading into 2018, Sporting Kansas City looks like a team that needs a lot of work. It has some talented younger players but it has an old core with players like Graham Zusi, Matt Besler, Benny Feilhaber, and Roger Espinoza. To make matters worse, the club lost Erik Palmer-Brown to Manchester City for nothing after failing to sign him to a new deal.

Sporting Kansas City has been among the best teams in MLS for many years and still managed to win MLS Cup in 2017. But the roster might need a major overhaul soon.