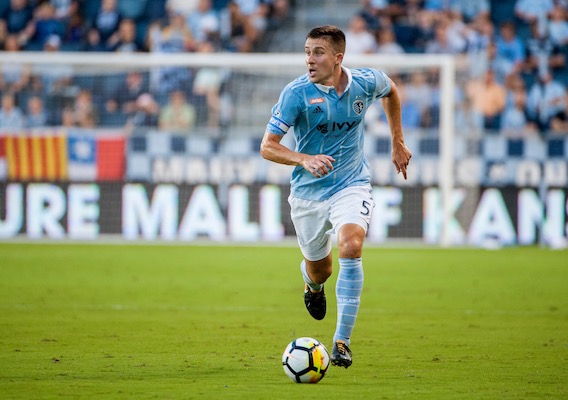 Sporting KC Stays on a Roll, NYCFC Rolls to Connecticut

Sporting Kansas City is playing great soccer late in the season—a wondeful thing in a league where way too many teams make the playoffs. Also: NYCFC has a home game in Connecticut, which is weird.
BY Franco Panizo Posted
September 22, 2017
7:00 AM

THE CHAMPAGNE FLOWED. Another trophy was raised. Sporting Kansas City delivered yet again while building on its recent winning reputation.

Sporting KC lifted its fourth title in five years on Wednesday night, defeating the New York Red Bulls, 2-1, to claim the U.S. Open Cup final at Children’s Mercy Park. Role players Latif Blessing and Daniel Salloi provided the goals for Kansas City, and that spoke to the team’s ability to function as a well-oiled unit that gets contributions across the field and does not rely solely on one or two players to make the difference.

With a championship wind now in its sails, Sporting KC will attempt to close out the MLS regular season by claiming the top spot in the Western Conference. The club currently sits one point off first place but can potentially move into pole position with a Sunday victory against the sputtering LA Galaxy.

Los Angeles is coming off another embarrassing result, a 4-0 loss at the hands of Atlanta United, so Kansas City should be feeling confident about its chances. What’s more is that the match will take place at Children’s Mercy Park, where fans are sure to still be on the U.S. Open Cup high and likely to provide yet another great atmosphere for Peter Vermes’ side.

And then there's the Red Bulls. New York suffered its latest demoralizing and frustrating letdown—in a final, no less—and now has to quickly regroup to try and lock down a postseason berth. The Red Bulls are only three points ahead of the Montreal Impact for the sixth seed, and another road defeat on Saturday to Columbus Crew SC would leave the door open for the Impact to pull level.

Topping Columbus will not be easy. Crew SC will not only be more rested and playing inside the comforts of Mapfre Stadium, but is also playing good soccer at the moment. The club is currently on a six-game unbeaten run and has not tasted defeat at home in a stretch of five matches that dates back to early July.

New York head coach Jesse Marsch is unlikely to change his approach or style during the stretch run of the campaign, but something he could consider is deploying Gonzalo Veron. A Designated Player, Veron continues to come off the bench despite showing more attacking talent than the industrious but limited Alex Muyl. Regardless of if Veron gets more minutes or not, the Red Bulls need to improve offensively. The team has scored just four times in its last six games, and that level of production simply will not cut it if it wishes to avoid another disappointment.

Now that is how you bounce back.

Four days after suffering a gut-wrenching loss to Minnesota United in stoppage time, the Impact responded by shocking league-leading Toronto FC, 5-3, on Wednesday. Montreal’s win marked the first time this season that an opposing team left BMO Field victorious, ended Toronto’s undefeated run at 11 matches, and could serve as a springboard for bigger and better things for Mauro Biello and his men.

That is, of course, if they can avoid the type of inconsistency that has plagued them all year. The Impact is currently on the outside of the playoff picture looking in, and needs to piece together some strong performances in order to maneuver through the remaining schedule.

A key to it all will be how well Ignacio Piatti and Blerim Dzemaili play. The Impact defense is far from stingy, and that constantly puts pressure on Piatti and Dzemaili to produce plenty of goals. If the dynamic duo struggle to carry the attack, it will be hard for the club to survive the regular season. If they can replicate the types of outings they had vs. Toronto FC, however, the Impact stand a good chance of making it to the playoffs once again.

While Montreal just passed a major test, things do not get any easier this weekend. The club will visit Atlanta United at Mercedes-Benz Stadium on Sunday, and that means going up against arguably the hottest team in MLS right now.

Atlanta crushed LA on Wednesday, the third time in four fixtures it claimed victory inside its new home. The expansion side has plenty to feel good about right now, as it has scored a whopping 17 goals while picking up 10 out of 12 possible points at home since moving away from Bobby Dodd Stadium.

Josef Martinez has been doing a lot of the heavy lifting—he scored a hat-trick in two separate games last week to be named the most recent MLS Player of the Week—but multiple players continue to step up. Yamil Asad, for instance, scored twice in Wednesday’s win.

With so many players capable of making a difference, Atlanta United is looking like a serious threat in the east right now. Another lopsided victory, against a Montreal side that is coming off a big win of its own, would only serve to underline that.

MLS will showcase and boast Atlanta’s impressive atmosphere in a marquee match that will be broadcasted on FOX on Sunday, but the setting for the league’s first game of the weekend is something it will not be bragging about.

New York City FC is set to host the Houston Dynamo in a nationally televised affair on Saturday afternoon, and the interesting wrinkle in this one is that NYCFC will not be welcoming the opposition to Yankee Stadium for the first time. Instead, the Eastern Conference club is holding this “home” match at Pratt & Whitney Stadium in East Hartford, Conn., due to MLB’s New York Yankees needing to play a rescheduled game at Yankee Stadium.

How that affects the way New York City plays, how comfortable they feel, and how many fans turn out are all things that bear watching, as this is far from an ideal scenario for the league in its 22nd season. There is slight good news in that David Villa should be back in NYCFC’s starting lineup, but that still is unlikely to be the biggest talking point given the unfortunate and downright disappointing circumstances.