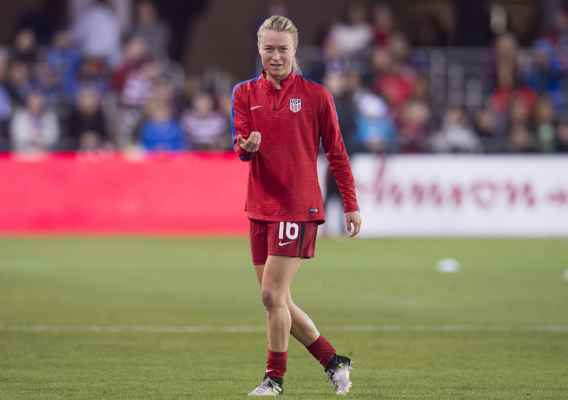 Sonnett looking to bring Australian success to the USWNT

Emily Sonnett has had a tough time earning consistent calls to the USWNT but now the Georgia native is hoping that success in Australia's W-League will result in an improved game and staying power at the international level.
BY John Halloran Posted
January 17, 2018
8:50 AM

Left out of the United States women’s national team for most of 2017, Emily Sonnett had a decision to make this fall. While she’d just helped lead the Portland Thorns to an NWSL title, she still didn’t know whether her play in the league would be enough to earn her a call-up into the Americans’ upcoming camps and didn’t want to spend her off-season waiting to find out.

Instead, Sonnett decided to take a more ambitious step and spend her winter playing abroad in Australia’s W-League.

“I had been in and out with the national team [last year],” Sonnett told American Soccer Now, “and, to be quite honest, not being completely sure with my future of coming in for the next year or so, I kind of took a step back and said, ‘What do I want to do, and do I want to continue playing in the off-season instead of just waiting around to see if I get called into camp?’

“I’ve only heard good things about the W-League and it’s a great in-between season to keep fitness, to keep touches on the ball, to have a team to play with. I think that's what sparked my interest.”

The Georgia native is no stranger to U.S. fans, first breaking into the American squad in 2015 while still a student at the University of Virginia. That fall, the youngster earned four caps in the team’s World Cup Victory Tour, despite the fact that the games were largely set-up to showcase the veterans who led the team to a world championship that summer.

In 2016, Sonnett impressed enough to earn another eight caps, and many fans saw her as the heir apparent at center back.

The team struggled at the 2016 Olympics—where Sonnett had earned a spot as an alternate on the smaller Olympic roster—and following the U.S.’ failure in Rio, head coach Jill Ellis started to make wholesale changes to the squad.

And while Sonnett did make the roster for a handful of camps last year, she also missed several call-ups, and didn’t manage to earn even a single cap.

Midway through her NWSL season, the defender recognized she had a problem, and sought the help of her club coach, Mark Parsons.

“My first half of the NWSL season was average at best,” explained Sonnett. “I was very inconsistent. I sat down with [Mark] and said, ‘What can I do to try and get back in with the national team?”

Parsons told her to take the season day by day, work to make small gains, and focus on improving her strengths. Sonnett took the advice, improved her consistency in the second half of the season and, in November, finally earned another opportunity with the U.S.

The 24-year-old was, of course, happy to get the call-up, but being recalled into the squad also presented problems. Having already made the decision to go abroad, Sonnett would now be spending quite a bit of time traveling between Australia and the west coast of the U.S. for the team’s November and January camps—with each round trip clocking in at 30 hours of time in the air.

“It felt rewarding in a sense because I felt like I had played well in the second half of the NWSL season, but I was [also] thinking about travel, coming back,” she noted. “I had only been in Australia for, I think, not even two weeks and then had to come back. I went to Australia, adjusted to the time zone, had to leave, had to readjust staying here for two weeks and went back to Australia and had to readjust. I was readjusting to time zones for almost a month.”

While Sonnett didn’t play in either November match for the U.S., she did do well enough to earn another call-up, this time for the team’s January camp—which culminates this Sunday with a match against Denmark (7:30 ET, ESPN).

This camp, and a fresh opportunity with the national team, has the defender setting new goals for the new year.

“You have to be that trustworthy player on the ball that you're not going to give the ball away. You’re going to make big tackles. So, I think getting a little bit older now and embodying that role, I think is huge for me,” said Sonnett.

“If you're not consistent, you will not be called into camp. I think making a case for myself to always be in camp [is a goal] because if you're not in camp, you can’t show, and if you can’t show then you’re not making rosters. That just comes with having the mentality to compete every single day and that is a lot harder said than done.