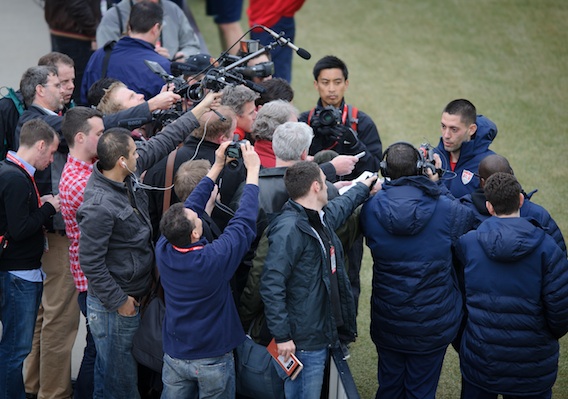 Here is one last look at the Sporting News article that launched a thousand—OK, probably more like 10,000—tweets. These seven ASN friends and contributors all have distinctive takes. What's yours?
BY John Godfrey Posted
March 21, 2013
10:20 AM
These 100-word blasts are in response to Brian Straus' considerably longer—and more controversial—Sporting News article that quotes numerous unnamed sources and is highly critical of U.S. national team coach Jurgen Klinsmann. Read it before you read these, please. Korey Donahoo
President, American Outlaws
It is disheartening as a diehard fan to see disharmony in the dressing room, and it sometimes makes you wonder if the players care as much as we do. We are lucky as fans of the USMNT that we haven't really had to deal with disharmony too much; at least not lately. While I think some of the worry is overblown and some is justified, I'm excited to go to these next two games and remind the players and the coach how much it means to all of us. Brian Sciaretta
Soccer writer
The truth is hard for a lot of people to handle and the fact that not all is right with the USMNT under Klinsmann is a bitter pill. But the way the team has played ever since Klinsmann was hired reflects a team in turmoil and devoid of any coherent tactical plan. The question I’ve been asking is, which field players during the Klinsmann era are playing as well for the USMNT as they are with their clubs? The answer is maybe Cherundolo and at times Bradley and Dempsey. Things can change, but so far Klinsmann’s approach is not working. Will Parchman
ASN columnist
Is this what it feels like to be French? Seems we have a legitimate crisis in its embryonic stages, worming itself out from the ground and threatening to seize this World Cup qualifying campaign by its throat. Whatever the impact on the field (which I think will be negligible for now), what Straus and others are doing is helping drag us into an age of increased public scrutiny and discernment. So long as it doesn't go too far, it's the sign of a healthy soccer culture and helps separate wheat from chaff. Ryan O'Hanlon
ASN contributing editor
So, in a gigantic player pool, some dudes are anonymously unhappy with the coach. The coach, who was never known for his game-to-game tactics, might not be the world's greatest in-game tactician. Some players—players with similar backgrounds—are better friends with each other than the rest of the team. And not everyone is psyched about playing in qualifiers. I don't know. This sounds a lot like every national team on planet earth. Oh, also: we’re all going to die. Josh Deaver
ASN contributor
When Jurgen Klinsmann laid out his vision nearly two years ago, he never said it would not be easy. Players would be challenged, expectations would be raised, and scrutiny would become a greater part of the process. It’s all come to pass. However, now that all the baggage is out on the table, what will be the response? Positive results will surely settle the waters, but this could be a key, transformative moment for the national team. Looking back, "the article" could either be the catalyst for a Klinsmann-led renaissance or the beginning of the end. Matt Thacker
ASN MLS correspondent
In light of Bruce Arena’s comments to ESPN that national team players should be American, I am starting to believe the real story is being missed under the avalanche of criticism—some fair and some not—being directed at Klinsmann. There is at least a hint of a division between German-born players and their teammates, and that is troubling. Feelings of resentment can destroy a team, while good chemistry can overcome many flaws. I don’t think the clock can be unwound on the U.S. recruiting foreign-born players, so it’s time for the players to come together. Eduardo Mendez
ASN contributor
The most telling part of Brian Straus’ article was the response that followed from a true class act. Facebook finally served its purpose when Carlos Bocanegra updated his status with right-minded words. His response gave credence to the public outcry that followed his exclusion from the roster. Quality leadership is an invaluable asset on and off the field. A unifying presence is more important than a player “in form” when facing dire circumstances. In the end, Jurgen Klinsmann was hired to “change the culture of American soccer.” Is anyone surprised that he’s ruffled a few feathers? OK, now it's your turn. Agree or disagree with any of our pundits? Have something to add to the discourse? Go for it.