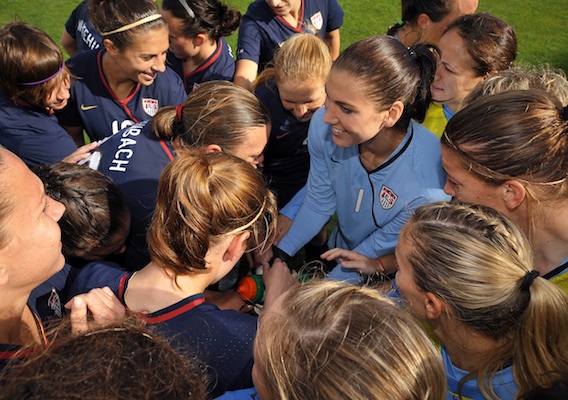 There is a vacancy at the top of the United States women's national team, and the next coach will have a difficult job that requires multiple skills. Who will it be?
BY Maura Gladys Posted
October 10, 2012
10:45 AM

As soon as Pia Sundhage boarded a plane back to Sweden—off to serenade another group of soccer players—attention in America turned to finding her successor.

It's a prime position in the world of women's soccer. Coaching the United States national team is arguably the most visibile job in the sport. But the Stars and Stripes are in a transitional phase, and the next manager will need to succeed in a few different areas. Plus, following the unique, but successful, Sundhage adds pressure.

It's not a job for everyone. There are three key factors that the next coach of the USWNT will need to have followed by the worth candidates:

1. A commitment to the U.S. youth system One knock on Sundhage’s style was that while she worked magic with a core group of roughly two dozen players, she never showed an interest in bringing up waves of younger talent. Furthermore, she pretty much avoided getting involved with the U.S. youth system. As a result, the younger generation suffered. The new coach will have to widen the pipeline. When asked last week about the coach’s involvement in the youth system, Sunil Gulati stressed that it would not be a deciding factor, but alluded to the fact that deep knowledge of the system would be a plus.

2. A focus on building a women’s domestic league Another version of a professional league is in the works, this time with U.S. Soccer firmly involved. The new coach will help cultivate and grow the league in order to benefit the national team. No previous coach has been tasked with being this active. 3. The ability to player-manage While it’s not a team in turmoil, Team USA is definitely a squad in flux. Sundhage increased the cohesion, and it will be up to this manager to retain that spirit, while making tactical decisions that benefit his or her vision. The new coach will have to set expectations and manage emotions quickly and effectively.

“More than anything, I think the next U.S. coach needs to be a spectacular player manager,” says women’s soccer writer Jeff Kassouf. “There are some tough decisions to be made regarding young players and veterans and those will have to be handled tactfully.”

So, based on these qualities, who are some of the top candidates? First, who is out: Interim coach Jill Ellis, who removed herself from the running, according to Gulati, as did former USWNT coach April Heinrichs, currently the USWNT's technical director. Listen closely and you'll hear Tony DiCicco’s name being whispered, but it’s not likely he would come back.

All three possess the right mix of youth and national experience. Each one can bridge the gap between veterans and youth. The real question is do any of them play guitar?