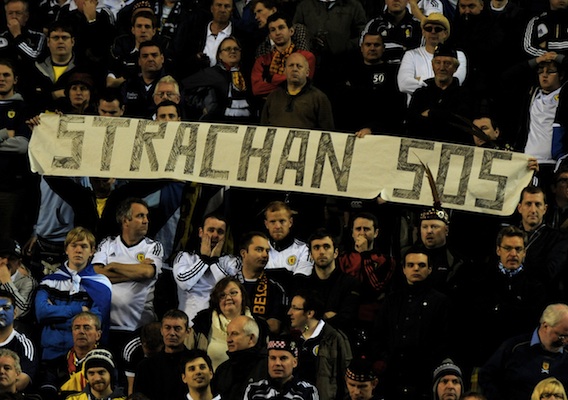 Scotland Out for Revenge (And It Just Might Get It)

Gordon Strachan has transformed the once-woeful Scotland national soccer team into a force to be reckoned with, and the United States should expect a tough battle on Friday night.
BY Blake Thomsen Posted
November 14, 2013
2:41 PM
THE LAST TIME THE UNITED STATES men's soccer team played Scotland, Landon Donovan scored a hat trick and the Yanks absolutely dominated from start to finish en route to one of the easiest wins of the Jurgen Klinsmann era. The 5-1 blowout really could have been much worse for the Scots. It was a shockingly poor showing from Scotland, which looked more like a CONCACAF minnow than a European side with a proud tradition. The defense was horribly disorganized throughout and the U.S. was able to cut through the Scottish back line almost at will, using nothing more than simple passes. And Scotland didn’t help its cause by repeatedly giving the ball away in dangerous areas. And, it must be said, this wasn’t accomplished with the likes of Clint Dempsey, Jozy Altidore, and Fabian Johnson in peak attacking form. The U.S. lineup that night featured Terrence Boyd alone up top and Jose Torres on the left wing in a 4-3-3, a formation that rarely delivered any attacking returns for early Klinsmann teams. But that lineup had more than sufficient firepower against a sloppy and careless Scotland team. Scotland was hardly better at the attacking end of the field. The Scots did score a fortuitous own goal to make the final score a little more respectable. But the team was unable to produce a single shot on target over the 90 minutes—a telling statistic in a truly awful performance. Having said all of that, the United States should not expect a leisurely walk in Hampden Park on Friday (3 p.m. Eastern; ESPN2 and UniMas). Around a year-and-a-half later, there is an entirely different mood surrounding this Scotland team.

The squad fell just short of qualifying for Brazil, but new manager Gordon Strachan has his men defending strongly and playing better attacking soccer than they have in years. Perhaps more importantly, the former Manchester United striker has completely transformed the culture of the national team, dispelling the old notion that most of Scotland’s players didn’t even want to report for international duty. Aging, somewhat disinterested veterans have been pushed out in favor of up and comers who are itching to return Scotland to a major tournament for the first time since the 1998 World Cup. It’s likely that only two or three players from Scotland’s starting XI in May 2012 will start in the rematch, and several of the players who started the previous game against the U.S. aren’t even in the squad. This drastic personnel and culture change has shown in the team’s results. After a disappointing start to World Cup qualifying, Scotland’s form has improved markedly over the last five months. The Scots have gone 3-2-0 since June, with two wins over an excellent Croatia side and also a hard-earned road win at Macedonia. Those two losses came at Wembley Stadium against England and at home to the frighteningly good Belgium team that dismantled the Americans back in May. This game is being viewed as preparation for Scotland’s push for qualification for the 2016 European Championships, an attainable goal given that its FIFA ranking has jumped to 35 and the program seems thoroughly revitalized. And Scotland will be keen to get revenge against the Yanks after a defeat that what was widely (and justifiably) deemed “embarrassing” by the Scottish press back in 2012.

Players and Matchups to Watch

David Marshall (goalkeeper)
Few nations enjoy the consistent excellence in net that the U.S. benefits from, and Scotland is no exception. Marshall can be sensational when he’s on—see recent 10- and 11-save masterpieces against Norwich and Tottenham, respectively. But he’s also prone to lapses in concentration and damaging errors, as shown in his howler-fest against Chelsea last month. Whether the Cardiff City stopper is in form or not may ultimately decide the match. Russell Martin (central defender)
The Norwich City captain will be played out of position in this match and could be vulnerable in certain situations. A right back by trade, Martin is expected to take a place in the center of the Scotland defense. Martin reads the game well but is not the strongest player, and Jozy Altidore will look to exploit his considerable strength advantage in the box. Scott Brown (central midfield)
The combative Brown has bundles of Champions League experience after playing for Celtic since 2007. Brown captains both Celtic and Scotland, and is perhaps his country’s best player. Certainly a World Cup-caliber central midfielder, he’ll be a worthy adversary to Michael Bradley and Jermaine Jones in the middle of the field. And don’t bet against bookings for both Brown and Jones in this one. Ikechi Anya (left midfield)
The Nigerian-Romanian Scot has shone for his adopted home country since his first cap in September. Anya gives Scotland some much-needed pace and will provide a real test for Brad Evans (or Eric Lichaj?), though Evans has coped admirably with quicker players throughout his spell at right back for the U.S. Still, Anya’s pace is exceptional (see below for proof) and he will surely push American defenders to the limit (and may force Alejandro Bedoya to drop back from right midfield and defend as well). Robert Snodgrass (attacking/right midfield)
Snodgrass has scored twice from open play in his last four matches for Scotland, but he’s even more dangerous on set pieces (video evidence below). The Norwich man led the Premier League with three goals from direct free kicks last season and got back to his old ways this weekend with this stunner against West Ham. Though Snodgrass will pose a considerable threat to Tim Howard’s goal throughout the game, his beard will be no match for the American keeper’s. Steven Naismith and Steven Fletcher (strikers)
Naismith has been in fine form for his country recently, playing well and scoring in the 2-0 home win over Croatia last month. He’s far smaller than any of the U.S. center backs he may come up against, but he’s quicker, too. With Naismith lurking up top, the U.S. back line will have to be on guard against through balls in behind. Fletcher may not start due to past injury concerns, but he should see some game time and will pose a different kind of threat with his strength and exceptional finishing ability. The man who is currently keeping Jozy Altidore out of the Sunderland starting XI led the Premier League in chance conversion rate last season.