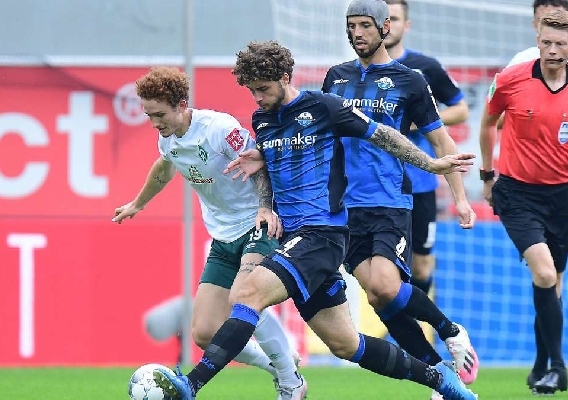 As always, Brian Sciaretta is here for you every Monday to take you through the weekend for Americans abroad - step by step. For many it was a very positive few days while a few others struggled.
BY Brian Sciaretta Posted
June 15, 2020
8:00 AM

FOR THE MOST PART, it was a very good weekend for Americans abroad. Josh Sargent and Weston McKennie came ready to play and delivered. Jesse Marsch has his team surging to a title and Erik Palmer-Brown is quietly having himself an important year in Austria.

It wasn’t great for everyone. Tyler Boyd struggled for Besiktas in its restart and Pellegrino Matarazzo’s Stuttgart team suffered a terrible loss to hurt its promotional chances.

ASN’s Brian Sciaretta walks you through it step by step and covers the news for Americans abroad.

It was probably the biggest game of Josh Sargent’s career. A loss or maybe even a draw to last-place Paderborn would be a huge blow to its survival chances. This is a game it had to win because if Werder Bremen couldn’t defeat Paderborn with everything on the line, who could it beat.

With all this on the line, Werder Bremen turned to Sargent and the St. Louis native turned in a very good performance where he had a hand in two goals and a drawn penalty (which was eventually saved) en route to a 5-1 victory.

He drew a penalty with a handball and the two goals he helped create were his shots which forced saves – allowing a teammate to put in the rebound.

Strikers need to score goals and while it is true that Sargent hasn’t found the back of the net since the restart, it is only a matter of time before the goals come if he can play like he did on Saturday.

In this game, Sargent was lively and his off-the-ball movement was significantly improved. His positioning was terrific. He got open in dangerous areas and he freed up his teammates. This was also the best he looked beating defenders with the dribble.

What is also appealing about Sargent is that when he’s on his game like Saturday, he’s also very effective getting involved on the defensive side of the game.

Of course, Paderborn was awful, but Werder showed up in the manner that was required. What was important for Werder is that everything that could have gone right, went right. Fortuna Dusseldorf lost to Borussia Dortmund late in stoppage time. With Werder’s blowout win, it is now even with Fortuna on points and it now only trails by one goal in the goal differential tiebreaker (making up five goals over the weekend. Werder is now only three points behind Mainz after it lost to Augsburg on Sunday.

The most important takeaway is that Sargent is 20 years old and Werder Bremen is a massive club at a critical time in its history. Werder is a club no one expects to be relegated but it is in a tough, tough spot. At such a big moment, Sargent is regularly starting as the club views him as its best option to remain in the Bundesliga. As of now, the club has a much better chance of doing that than it did last week.

McKennie in top form vs. Leverkusen

While Schalke has been awful in 2020, Weston McKennie has been among the team’s best players during this poor run. On Sunday, Schalke was a big underdog against the fifth-place team in the league in Bayer Leverkusen.

While Schalke’s winless skid stretched to 13 games in a 1-1 draw with Levekusen, it was the best the team has played in a long time. It was a hard-fought effort.

As for McKennie, he was first-rate in his outing where he returned to the starting lineup after serving a suspension last game due to yellow card accumulation.

As always, he was sharp in defense where he was a disruptive presence and effective in winning 50-50 balls. But it was his offense that was noticeably improved in recent weeks. He helped to create chances and his dribbling skills were on full display. Also of note was the fact he did not have the costly turnovers which hurt him in recent weeks.

This was the second-best performance McKennie had on the season – behind only his fantastic effort on March 7, 2020 in a 1-1 draw with Hoffenheim. The test for McKennie, however, will be to consistently deliver complete performances. It is true that he probably would have looked better this season on a better team, but it will be important to finish the season playing like this.

The worst bit of news for Americans abroad came on the coaching front as Stuttgart, managed by American Pellegrino Matarazzo, lost to Karlsruher 2-1 to drop into third place in the 2.Bundesliga. After Hamburg posted a win over Dynamo Dresden on Friday, Stuttgart knew it had to win to remain in second place.

With a lot on the line, Stuttgart came out uninspired against an opponent in the relegation zone. It was a major setback in the club’s aspiration to win automatic promotion via a top two finish. Stuttgart now sits one point behind HSV and HSV holds a significant advantage in goal differential. Next up for Stuttgart will Sandhausen on Wednesday. Meanwhile, Hamburg faces Osnabruck on Tuesday.

John Brooks has probably been the best and most consistent American player in 2020 and he has been a big part of Wolfsburg’s rise into sixth place for a spot in the Europa League.

On Saturday, Wolfsburg played to a disappointing 2-2 draw with Freiburg where it squandered a 2-0 lead and allowed Freiburg to come back for a point.

Brooks lost his man on Freiburg’s first goal and was unable to stop the looping header on Freiburg’s second. Despite squandering the lead, Wolfsburg has a three-point lead for sixth place while also holding a massive advantage in goal differential.

In the relegation half of the Austrian Bundesliga, Erik-Palmer Brown did not start for Austria Vienna on Saturday vs. Mattersburg as the manager is opting for a heavy squad rotation due to the congested schedule following the restart.

Palmer-Brown instead came off the bench to start the second half with Austria Vienna up 2-1. He scored his second goal of the season in the 48th minute off a header that probably should have been saved. But more importantly, he was able to keep Mattersburg scoreless as Austria Vienna coasted to a 4-1 win.

Aside from the goal, Palmer-Brown had a very good 45 minutes of action as he defended very well and passed with confidence out of the back – often with effective balls into the midfield to start dangerous opportunities.

Right now, it is looking as if Austria Vienna should qualify for a Europa League playoff by virtue of a top two finish in this half of the table. With the win it has a five point lead on third place Swarovski Tirol and trails Altach by just one point.

At this point, you might as well just start engraving the Austrian Bundesliga title to Jesse Marsch’s Red Bull Salzburg. The club defeated LASK 3-1 on Sunday and it now has a seven point lead on Rapid Vienna with six games to play.

There is still time for other teams to catch Salzburg, but that won’t happen with the way Marsch’s team is playing since the restart. In the five games it has played since play resumed (four league games and the Austrian Cup final) it is now outscoring opponents 21-2.

It has been a groundbreaking season for Marsch with him winning a domestic cup and coaching the Champions League – both firsts for an American born and raised manager in Europe. A league trophy would mark yet another accomplishment.

The weekend’s Bundesliga games got starter on Friday when RB Leipzig downed Hoffenheim 2-0.

Tyler Adams came into the game and played the final 23 minutes.

It wasn’t a spectacular outing from Adams but he did his job. He came into the game to calm it down and ensure that Hoffenheim couldn’t build any momentum. Adams did not have a lot of offensive work to do but he did not put in a wrong foot in his time on the field.

Tyler Boyd started for Besiktas in its first game since the restart on Saturday. He ended up going 64 minutes in a 2-1 loss to Antalyaspor (but it was 2-0 when he was taken out).

This was not an acceptable result for Besiktas. Boyd was active although his final ball was lacking throughout. He managed to have five shots in this one.

When watching, he was not invisible but he needs to be more effective.

Overall, this could have been attributable to rust since Besiktas hasn’t played in months but Boyd had been playing well prior to the shutdown once the managerial change was made in February.

There were several other games involving Americans abroad too.

Hobro played AC Horsens to a 1-1 in the relegation round of the Danish Superliga. Christian Cappis played a full 90 for Hobro and nearly won it late in the game as his shot from distance went just over the bar. Emmanuel Sabbi missed the game due to suspension. Horsens’ backup goalkeeper Michael Lansing, a New Jersey native, did not play.

Borussia Dortmund defeated Fortuna Dusseldorf thanks to a stoppage time winner from Erling Haaland. Gio Reyna, 17, played the final 17 minutes for Dortmund and Alfredo Morales played the final nine minutes for Fortuna. It was a crushing defeat for Fortuna which played extremely hard but not only lost the game, but saw its lead over Werder Bremen for the relegation playoff spot reduced to a single goal in the goal differential tiebreaker.

Julian Green notched an assist in the 2.Bundesliga on Saturday as Greuther Furth defeated Nurnberg 1-0. The American attacker also signed a new two year deal with the club.

After undergoing a procedure to correct an irregular heartbeat, American left back Antonee Robinson is back to full training with Wigan Athletic. Just prior to the discovery of his condition, Robinson was on the verge of a move to AC Milan. It will be interesting to see if that move or another move resurfaces for Robinson this summer. Wigan sit in 20th place in the Championship and are just two points clear of the relegation zone.

Sebastian Soto is reportedly going to sign for Norwich this summer and a loan is probably necessary as he does not qualify for an English work permit right now without an EU passport. His time at Hannover, meanwhile, is not ending well.

5 Hannover players were ticketed by police for violating COVID-19 regulations & will have to train individually. Club officials say behavior was "not acceptable." One of the 5 was Sebastian Soto - not that it matters much since his contract ends next month https://t.co/bIOd559qsR

Mix Diskerud, 29, will join Helsingborg on loan (from Manchester City) this season in Sweden’s top flight Allsvenskan. Helsingborg finished 10th last season in 2019 after earning promotion in 2018. Diskerud was previously with Ulsan Hyundai in South Korea in 2019.