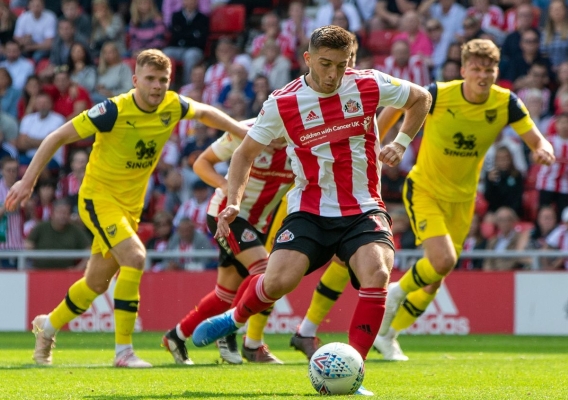 It wasn't the best weekend for Americans abroad. Sergino Dest did not get off the bench. Matt Miazga and Reading suffered a tough loss. Soto and Novakovich each only made late cameos. Horvath migh be heading to the bench. But Sargent and Weah? Both continued to impress.
BY Brian Sciaretta Posted
August 05, 2019
7:10 AM
THE WEEKEND FOR Americans abroad wasn’t all that great, despite the fact that the lower levels of England and the Eredivisie have now all begun their season – in addition to 2.Bundesliga and the Danish and Belgian leagues which also boast a high number of Americans.

For a lot of the current U.S. youth internationals, it was uneventful. Sebastian Soto came off the bench in the 86th minute for Hannover’s 1-1 draw with Jahn Regensburg (and American Jann George also played sub minutes for Regensburg. Chris Gloster is injured and was not able to participate. For both Gloster and Soto, their contract situation is unsettled as both players have walked away from discussions with Hannover over a new deal.

Sergino Dest was an unused substitute for Ajax in a 2-2 season opening draw with Vitesse. U.S. U-23 forward Haji Wright started and drew a penalty as he went 90 for VVV Venlo in a 3-1 win over RKC Waalwijk. Meanwhile in Denmark, Jonathan Amon continues to be sidelined for Nordsjaelland and this week Emmanuel Sabbit was also unable to play for Hobro. Meanwhile potential U.S. U-23 mid Christian Cappis, is impressing for Hobro.


The Championship opening weekend was particular poor for Americans.

Luca de la Torre did not get off the bench for Fulham and Tim Ream did not dress (making one wonder if something was up). Matt Miazga and Reading opened their season with a 3-1 loss to Sheffield Wednesday with Andrija Novakoivich making a late cameo.

Eric Lichaj is now the captain of Hull City but his team lost its opening game to Swansea: 2-1 on the road. Duane Holmes is still returning from injury and won’t play in Derby County’s opener on Monday.

The two exceptions to the dull weekend in the Championship was Geoff Cameron notching an assist for Queens Park Rangers in a 2-1 away win against his former club, Stoke City. Cameron’s assist in the 53rd minute made the game 2-0 for QPR.

Also, Antonee Robinson went the distance for Wigan Athletic in a 3-2 win over Cardiff City at home. Robinson was effective on both sides of the ball and was instrumental in the club securing three valuable points.


Four Americans found the back of the net over the weekend.

Lynden Gooch drew a penalty for Sunderland in the 49th minute of its home game vs. Oxford United. Gooch elected to take the penalty himself – which he converted to equalize the game at 1-1. That is how it would end in a disappointing result for the home side.

Michael Hoyos scored his sixth goal of the season for Guayaquil City in the Ecuadorian Serie A. His 63rd minute gave Guayaquil City a 1-0 lead over Fuerza Amarilla (which would turn out to be the final score). Guayaquil City sits in 12th place of the 16 team league. Hoyos is still looking for an MLS team and you wonder if his continued success will attract an offer.

Julian Green scored the final goal of the game for Greuther Furth in a 3-1 win over St. Pauli. It was a nice goal from distance but the defense was extremely slow in closing down on Green when it was clear he was going to shoot.


In the 2.Bundesliga, St. Pauli 1-3 Greuther Furth. American mid Julian Green with a very nice 70th minute goal to round out the scoring. Green played a full 90 pic.twitter.com/7yQXTK6Pl3


Tim Weah scored for Lille in a 3-2 preseason friendly vs. Roma. This was an extremely impressive play from the young American attacker. It wasn’t necessarily the goal, but it was his pass into the box that set up the initial shot that was beautiful.


Josh Sargent played the second half of a 0-0 friendly draw against Everton but impressed as he was involved in numerous offensive plays and was very active throughout.

Sargent has simply had a great preseason and has showed that he is capable and deserves to have a big role with Werder this season. Missing out on the Gold Cup was a disappointment for Sargent and for U.S. fans but there is a very winnable argument that him playing in the preseason was best for him.


Red Bulls Salzburg defeated Mattersburg 4-1 on Sunday and the victory gives the club six points through its first two games of the Austrian Bundesliga season. American manager Jesse Marsch remains perfect on the season – which also includes a win in the first round of the Austrian Cup.

Despite the managerial change to bring in Marsch, Salzburg remains the favorites to win the Austrian Bundesliga this season. The true test for Marsch will be in European play. But the more confidence the team can gain from these games, the more likely it will be successful when it heads into the Champions League.


Joel Sonora and Erik Palmer-Brown were teammates on the 2015 U.S. U-20 World Cup team and over the weekend both players found new clubs.

Erik Palmer Brown joined Austria Vienna on loan from Manchester City. He has now had a whirlwind in the early stages of his career. He played for Sporting Kanas City and then went on loan to Porto B. He then signed for Manchester City but has since gone on loan to Kortrijk in Belgium, NAC Breda in the Eredivisie, and now Austria Vienna in the Austrian Bundesliga.

This seems like it could be an interesting fit. The club qualified for the Europa League after a fourth place finish last season. But it has been very poor to start this season – losing its first two games by a combined score of 1-6. The club can certainly use Palmer-Brown but he needs to avoid another dysfunctional team like last year’s NAC Breda.


United States national team goalkeeper Ethan Horvath has been the starter on Club Brugge but will now have serious competition as Simon Mignolet is joining the club from Liverpool. The established veteran is not likely to be joining the club as a backup.


Simon Mignolet is leaving Liverpool. He has just landed in Belgium. He will join Club Brugge. #lfc pic.twitter.com/iWU3FcnouH