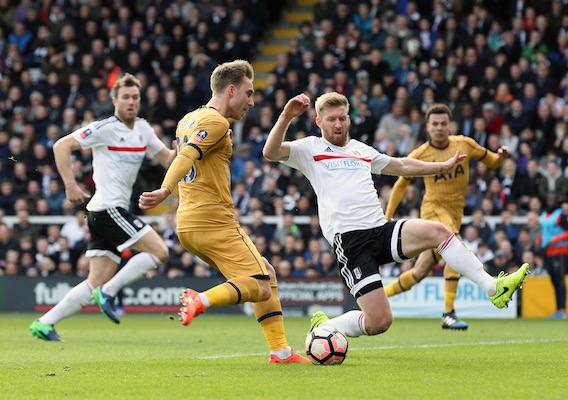 Saief and Chandler soar while most Americans abroad struggle

After starting the season strong, Americans abroad have hit a rough patch in January as many top players have either been injured, benched, or not playing well. That conitnued over the weekend but Timothy Chandler and Kenny Saief are notable exceptions.
BY Brian Sciaretta Posted
January 29, 2018
9:45 AM
THE FIRST MONTH OF 2018 has not been kind for American players in Europe and Mexico with poor performances, injuries, benchings, and losses becoming far too common. This weekend continued that trend.

Sure there were some nice performances worth talking about but its first important to discuss the negatives which involved the best American players right now.

Of course Weston McKennie is injured but he is not alone. John Brooks is still on the injury shelf again and the amount of time he has missed in recent years continues to be a concern. Fabian Johnson is out as well. Geoff Cameron has seen his minutes start to fade.

Then on Saturday, Danny Williams was taken out of Huddersfield’s FA Cup match over the weekend with an injury.

Peter Stoger has made Borussia Dortmund far less entertaining to watch since becoming manager in the falll and the team is far less effective offensively than in the past. Christian Pulisic is not playing as well as he used to and it really seems like a change of scenery might be a good idea this summer. In Dortmund’s 2-2 draw with Freiburg on Friday, Pulisic was subbed out in the 67th minute and Caleb Stanko did not come off the bench for Freiburg.

Bobby Wood and Hamburg will be extremely lucky to avoid relegation this season. A 1-1 draw against Leipzig on Saturday was a positive result but it still kept the team winless in its last seven Bundesliga games where it has scored just three goals in that span. Wood has just one goal n nearly 1200 minutes of action and 15 appearances in 2017/18.

Alfredo Morales had a goal from a header over the weekend but Ingolstadt blew a 2-0 lead against Jahn Regensburg and lost 3-2.

Shaq Moore was an unused substitute for Levante in Spain.

In the FA Cup, Eric Lichaj and Notthingham Forest were eliminated from the tournament after a 2-1 loss to Hull City over the weekend. Newcastle United was eliminated by Chelsea but DeAndre Yedlin did not come off the bench.

Also in the Championship, Cameron Carter-Vickers started again for Ipswich Town but it lost at home to league leaders Wolverhampton 1-0.

But enough of the bad news. Let’s look at some actual highlights


Kenny Saief is one of the best American players in the game right now and he is playing very well since moving to Anderlecht where he was reunited with his former Gent coach, Hein Vanhaezebrouck.

On Saturday, the Florida-born, Israeli-raised left winger hit a first-rate assist to Sofiene Hannie in a 3-3 draw on the road against Standard Liege.

It would hardly be surprising to see Saief become a big part of the U.S. team’s future.


Timothy Chandler and Eintracht Frankfurt are having a dream season at the moment. On Friday, the club defeated Borussia Monchengladbach 2-0 to move into fourth place in the Bundesliga.

Chandler, 27, continued his terrific run of form in the game where he assisted on Kevin-Prince Boateng’s first half goal for a 2-0 lead. But the German-American was dangerous throughout and was one of the game’s best players.

Ream and Fulham into the playoff zone


Last year Fulham qualified for the Championship promotional playoff but lost to Huddersfield in the first round. Now the London club is aiming to return to the playoffs again. Despite a poor start, the club has surged in recent months and would qualify for the playoffs if the season were to end today.

Tim Ream, 30, has been one of the team’s best players and continues to be a rock in central defense. On Saturday, the St. Louis native went the distance as Fulham beat Barnsley 3-1 on the road for its fourth straight victory. That brought the team into sixth place.

Nonetheless, it was quite surprising that a player who was unwanted at NYCFC, out of favor with the U.S. team, and playing on loan for midtable team in Sweden would be wanted by one of the best teams in the world.

ESPN quickly reported the obvious that Diskerud was not going to play for Manchester City or even train with the club’s first team. Instead, Manchester City was looking to loan or sell him to a club outside of the team’s controlled by City Football Group. A likely landing place seems to be back in Sweden.

Diskerud was no longer on the books at NYCFC but he was on the books for MLS and was loaned to Goteborg in 2017.

A Swedish report also seemed to convey the obvious that Diskerud’s deal was terminated with MLS and was signed with Manchester City because it was easier for him to leave CFG as opposed to MLS.

If so, this a terrible situation for MLS and CFG. Of course MLS would be better if it’s transfer policies and philosophies were in line with the global nature of the sport. But rules are rules and this circumvented the process. Shell transfers and deals are never good and CFG shouldn’t be there to rescue MLS or NYCFC from its decisions that do not work out.


Erik Palmer-Brown signed for Manchester City in the fall after a great year with the U.S. U-20 team. Not eligible for a U.K work permit, the Kansas City native was going to have to go on loan to play. Most likely he will be on loan for several years until he is even eligible to play for Manchester City.

European sources are telling ASN that Palmer-Brown will go on loan for the remainder of the season to Kortrijk in Belgium’s top flight. The club from Flanders is currently in ninth place in Belgium but is only two points from qualifying for the league’s championship round.


Matt Miazga avoided a suspension midweek for his role in an incident last week. On Sunday, the New Jersey native helped sixth place Vitesse to an important 2-1 road win over PEC Zwolle. Miazga was sharp in the game with his distribution out of the backline helpful in Vitesse’s attack.