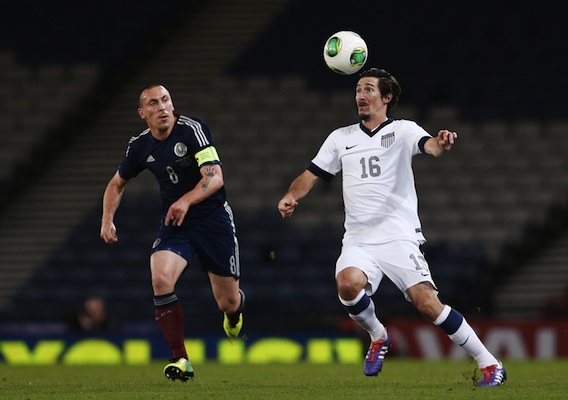 The Anderlecht midfielder and the Rapid Vienna striker both crashed out of European competition in the past week, but both added to their goal tallies in the process.
BY Josh Deaver Posted
December 18, 2013
10:46 AM
Michael Bradley—ASN rank #1
After a brief cameo against Fiorentina last week, Bradley returned to the starting XI for Roma on Monday, playing 90 minutes in a 2-2 draw with AC Milan. Playing out of his normal deep-lying midfield position, Bradley pushed higher up the field on several occasions, leading to some scoring chances for the top-rated player in the ASN 100. His best opportunity came in the 31st minute: Tied 1-1, Bradley had a chance to put the Wolves ahead only to see his side-footed effort cleared off the line at the last second by a Milan defender. Despite extending its unbeaten streak to 16 games with the draw—Roma’s fifth in six games—the club is rapidly losing ground to Juventus at the top of the Serie A table, sitting five points off the pace. Landon Donovan—ASN rank #3
After reports of a move to Liga MX club Atlas surfaced last week, Donovan was quick to squash the rumor, definitively telling a Los Angeles Galaxy town hall gathering this weekend, "I will not be going on loan." Citing the need for rest before embarking on what is sure to be a busy 2014, the all-time U.S. goal scorer is still expected to join up with the national team for the “mandatory” January camp. Clint Dempsey—ASN rank #4
With the rumors swirling regarding the American captain’s off-season destination, several sources indicated over the weekend that Dempsey will be making his return to Craven Cottage in January for a two-month loan spell with former club Fulham. Dempsey scored 50 league goals in seven seasons with the Whites before departing for Tottenham in 2012. Thrown back into the EPL pressure cooker, Dempsey will look to find his top form ahead of the World Cup and the start of his first full MLS season since signing with Seattle Sounders in August. Fulham could certainly use the firepower. The club has scored just 14 goals in 15 matches, with wantaway striker Dimitar Berbatov inching toward the exit sign. Jermaine Jones—ASN rank #9
Despite not featuring in the clinching 2-0 win over Basel, Jermaine Jones and Scahlke 04 advanced to the Champions League knockout round on Tuesday for the third time in four years. The club’s first opponent? None other than Christian Ronaldo and Real Madrid. With fixtures scheduled to begin in late February, it sounds like a pretty good warm-up for the World Cup. In Bundesliga action on Sunday, Jones entered off the bench in the second half, playing 32 minutes in a comfortable 2-0 win over SC Freiburg. Sacha Kljestan—ASN rank #14
On a goal-scoring tear with Anderlecht, Kljestan carried his form over to Europe’s elite club competition in midweek, notching his first-ever Champions League goal in a 3-1 loss to Olympiakos Pireaus. With the goal—his eighth in all competitions—Kljestan becomes only the fifth American to ever tally in the competition, joining the likes of Maurice Edu, DaMarcus Beasley, Jermaine Jones, and Jovan Kirovski. Despite the individual achievement, the match ended a disappointing campaign for the Belgian super club, which picked up just one point in the Group Stage. On Sunday, Kljestan took a well-deserved rest during the Purple and White’s 2-1 league win over Gent. DaMarcus Beasley—ASN rank #16
It was announced and then denied but it appears DaMarcus Beasely may be on his way to Liga MX side Queretaro. The club, awesomely known as the White Roosters, finished seventh in the recently concluded Apertura season, before being eliminated in the first round of the Liga MX playoffs. If the move goes through, U.S. national team observers will have yet another Mexican club to monitor. Terrence Boyd—ASN rank #20
The 22–year-old continued his stellar form for Rapid Vienna on Thursday, netting his 13th goal in all competitions during a 3-1 loss to Dynamo Kiev in Europa League action. Needing a win to advance to the quarterfinal round, Boyd opened the scoring in the 6th minute with a clever finish. Unfortunately it was not enough as the Green and Whites conceded three straight goals to send them packing from European competition. It was an excellent run from Boyd, whose four goals in the group stage trails only Tottenham’s Jemain Defoe in this year’s campaign. In domestic action on Sunday, Boyd was a late substitute, playing 17 minutes in a scoreless draw with Wiener Neustadt. The draw snapped a run of two consecutive Bundesliga losses, the club’s longest such streak since November 2012. John Brooks—ASN rank #23
Brooks and his rocket-to-the-moon trajectory fell a bit closer to earth this weekend. In only his second start back from a lengthy injury spell, Brooks was promptly torched on two early goals, compelling manager Jos Luhukay to pull the 20-year-old defender in the 38th minute of a 3-2 win over Werder Bremen. After the match the manager signaled out Brooks, excoriating him for lack of effort on Bremen’s second strike. “He's not active enough, so I have to react,” Luhukay said. “He needs to shake off this youthfulness and become an adult.” After the public tongue-lashing, the coach conceded Brooks may have picked up a recent knock in training, giving credence to accounts that Brooks did not appear in top form. Timothy Chandler—ASN rank #29
Somehow, someway FC Nurnberg remains winless in the Bundesliga. The nightmare run continued for Chandler and Der Club on Saturday against Hannover. After going up 3-0 in the opening half, the first three points of the season seemed assured. But FCN conceded twice in the final five minutes to split the points. Timothy Chandler—who recently said he hasn’t heard from Jurgen Klinsmann—played 90 minutes in the draw. On the club front, there could be interest elsewhere for Chandler, as it was reported this week that EPL side West Brom were closely watching the young German-American.