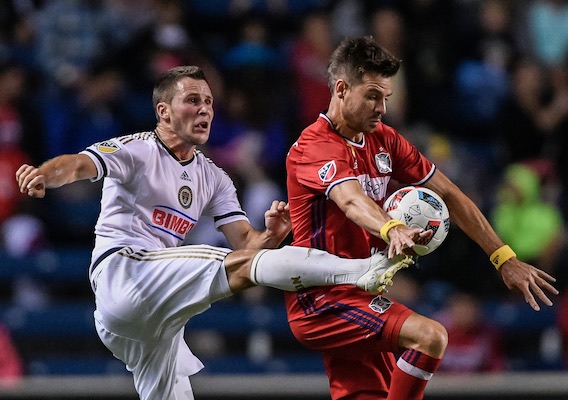 The 23-year-old right back knows he was fortunate to see so much playing time as an MLS rookie, but that doesn't mean he has modest expectations as U.S. men's national team camp approaches.
BY Brian Sciaretta Posted
December 26, 2016
12:00 AM

WHEN JANUARY CAMP OPENS, there will be an older feel to it as U.S. men's national team boss Bruce Arena looks to veterans to stabilize the team after a tough start to the Hexagonal round of qualifying. One of the new players to make the list, however, will be right back Keegan Rosenberry who is coming off a strong rookie season where he amassed a total of 3,234 minutes across all competitions.

Rosenberry, 23, earned accolades for his performance for the Philadelphia Union where he was the third overall draft pick in January’s MLS SuperDraft. The Lancaster County native ended up starting every single game for Philadelphia during the season and the only time he was subbed out was in its playoff loss to Toronto—with 10 minutes to go.

It was not all smooth sailing, but Rosenberry showed steady improvement both defensively and offensively. Because of that, it was hardly surprising that Arena announced in a Facebook chat last Friday that Rosenberry would be among the players invited into January Camp.

“We hope to announce our January camp in the near future, but you’re going to see many of the typical faces,” Arena said. “If I can give you a little bit of insight, a couple players that haven’t been around for a bit are going to be back in camp. An example would be Benny Feilhaber, Juan Agudelo, Gyasi Zardes, Darlington Nagbe, Jordan Morris, Chris Pontius, Dax McCarty, Keegan Rosenberry from Philadelphia, two center backs—[Matt] Hedges and [Walker] Zimmerman from Dallas—and so on and so forth.”

Rosenberry said that he was thrilled with the news but as the season progressed he made plans to prepare for January camp after the Union’s playoff campaign ended. He knew he had done well as a rookie and he had a chance to train with the U.S. team for one practice during the summer during Copa America Centenario. He appeared to have caught Jurgen Klinsmann’s eye and apparently Arena noticed him too.

For the past few weeks Rosenberry has been training as if he was going to be invited and now that he has, he is entering into camp as if he is not simply just happy to be there. He wants to prove a point.

“Getting invited is just the first step," Rosenberry told American Soccer Now. "I don't want to celebrate it too much. It's something I need to do well. Hopefully it's just the first step in a long process of a long relationship with the national team.”

Clearly there is an opening for Rosenberry. The right back position is currently occupied by Newcastle United’s DeAndre Yedlin and Eintracht Frankfurt’s Timothy Chandler. In MLS, others who can play the position inlclyde the Los Angeles Galaxy’s Robbie Rogers, Seattle’s Brad Evans, and Dallas’ Kellyn Acosta—although the latter two predominantly play in the midfield and Rogers only converted to the position in recent years.

Rosenberry exceeded all of expectations in 2016 and is one of the best young fullbacks MLS has seen since Yedlin’s rookie season in 2013.

“For me I am going to strive to be in the Best XI in the league and hopefully continue to be invited into the national team,” Rosenberry said. “I am just trying to prove myself in this first camp and make it a tough decision for them going forward.”

Having lost the first two games of the Hexagonal round of World Cup qualification, and with a new boss in charge of the squad, Rosenberry expects a very compeitive camp.

“I think everybody would agree they need some results,” Rosenberry said. “I didn't have too much experience with the staff before this but it just seems like maybe a fresh start and some new players and that maybe this camp will be good for everybody. One of the things I think a lot of people talk about with the U.S. national team is their work ethic and never giving up. I think everybody seems to embrace that really well. You should never count this team out.”

Rosenberry recognizes that the Union gave him a rare opportunity to play meaningful minutes as a rookie—something that likely wouldn't have happeend if another team had selected him.

“It's just a blessing to be given the opportunity to play that many minutes,” he said. “Mentally that's where even more growth happened for me. Just the daily grind and such a long season I have never participated in before. I leaned on some of the older guys to see how they take care of themselves and how they do it year after year. That is what I am even more thankful for, just that mental growth and fortitude and just being able to produce in a long year and towards the end of it.

“The fact that even when I didn't have my best game they continued to keep me on for the next game, he added. “That's a confidence booster. I gained a lot of experience in a short time and that is really going to pay dividends in the years to come and hopefully in the near future.”

And the first test of that will come next month as he and roughly 30 others seek to establish themselves on the U.S. men's national team.

Do you see Rosenberry as a potential solution at right back? Share your take in the Comments section below.