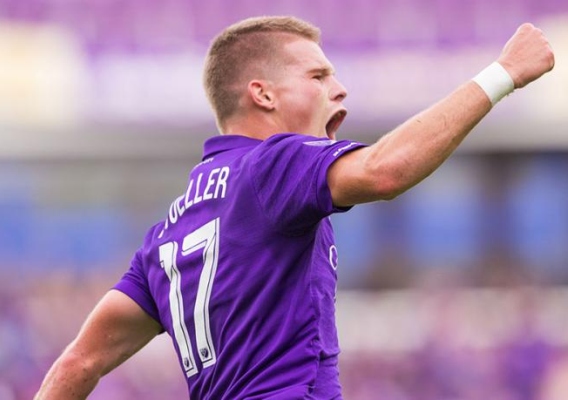 Orlando City is the hottest team in the league with five straight wins and while high profile players like Sacha Kljestan and Dom Dwyer have helped paved the way, rookie Chris Mueller has played a big role and is one of the league's best breakout players in the first two months.
BY Brian Sciaretta Posted
May 04, 2018
8:00 AM
One of the frequent criticisms of MLS in 2018 is whether or not the league gives enough young domestic players a chance to flourish. Of course, there are always players like Tyler Adams who come into the league and do well, but most of the headlines the past year have surrounded the influx of expensive and talented young South Americans.

Orlando City attacker Chris Mueller, 21, is a throwback to the American players who thrived in the league in its first 15 years. He is a player that went to college for four years but was ready to contribute in impressive ways right off the bat. Some, like Carlos Bocanegra, Brian McBride, Clint Mathis, and Josh Wolff would go on to have success abroad and at the World Cup.

His career is still in its infancy and it is impossible to know how it will end up, but the first indications have been very promising. As a versatile attacker, he has played mostly on the wing this season. So far, he has been on the field for 516 minutes, racking up three goals and an assist.

After Orlando started off the season poorly with just one point from three games, Muller has been a big part of the team’s turnaround as it has now won five in a row.

“It's been a crazy past couple of weeks,” Mueller told ASN. “The team is doing so well. We have five wins in a row. Being a part of that means a lot and making an impact is something every rookie wants to do and works towards. So I am very happy with where I am at right now. Honestly, I've just been trying to be myself, as a lot of the older guys have taught me. If you come in fear-based or you're nervous and not showing who you really are, that doesn't help.”

A native of Schaumburg, Illinois, Mueller grew up a fan of Chelsea and admired players like Ronaldinho – whom he believed made the game fun. He entered into the league as the sixth overall pick out of the University of Wisconsin where he helped turn around a struggling program.

During his time with the Badgers he played nearly every attacking position including both wings, the No. 10, a false nine, and the No. 9. In his final two years, he put up very impressive numbers – 17 goals, 31 assists in 40 games – and was named the Big Ten Conference offensive player of the year.

Most top young American players these days opt for ways to begin their career early. Some go abroad but others are also now bypassing school to sign homegrown deals and begin play with MLS reserve teams in the USL – most notably Philadelphia’s Anthony Fontana and the Red Bulls’ Ben Mines (Mines even turned down a scholarship from Stanford to play for NYRB II).

Mueller points out that options for him were limited but that the experience he got in college helped him as a player – both mentally and physically. Even with a short NCAA season, he returned to Chicago in the winter to play in 5v5 indoor leagues alongside professionals and then played in the PDL in the summer to keep him active throughout the year.

“In order to be successful and wanting to make it to this level, I never had an offseason,” Mueller said. “I never took time off. Even though the season was shorter, there was never even a week I took off. I don't think the jump is that surprising for me. I’m used to never stop playing. It's what I do - I love to be around the game. If I have a couple days away from the game, I am itching to get back onto the field.”

“I didn't really have any options to leave school early so I just had to make the most out of my situation,” Mueller added. “Honestly, I think I just learned a lot playing in college. I think it prepared me for where I'm at right now - playing four years at school. I had two rough-start years at school, but the whole team did. We weren't doing well. So in order to make that jump mentally, turn it around, and to finish the way I did and the team did, it built a lot of character inside of me. Mentally, that was a grind as well. Being able to do something like that has just translated into what I am doing right now.”

The Orlando City players and teammates have all been impressed with how Muller has come into the team and with his potential.

Dom Dwyer recently admitted the he is excited for Mueller’s potential while Sacha Kljestan, one of the few Americans to have played in the UEFA Champions League, notices that he is impressed with the way Mueller reads the game.

“He was the assist leader in college last year and you could see early on in training sessions and even in preseason he always had a good knack being around the goal,” Kljestan said. “But if there was an extra pass to be made at an open guy, he would slot it to him for a tap-in. He’s got good vision, and you can definitely say that he’s working hard and he’s getting goals but he’s setting them up now, too.”

Head coach Jason Kreis has had to make difficult decisions due to Mueller’s performances. Paraguayan designated player Josué Colmán, 19, was expected to start at the right midfield position but that has instead gone to Mueller whom Kreis cannot afford to take out of the lineup right now.

Mueller’s strong start might not have taken Orlando City by surprise but it has taken some fans by surprise as he was not well known. While many other top American rookies have earned recognition with U.S. youth national teams, Mueller has never played for any U.S. team at any age level.

The fact that he has less accolades in his past only helps him now and he is looking forward to continue proving people wrong.

“I think that's a key to how I play - with a sort of chip on my shoulder,” Mueller said. “Just being overlooked, in my opinion, it's driven to get me to where I am today. It takes a lot of grind to continue to believe in yourself even when everyone else isn't. I am not disappointed. I feel like time will tell.”