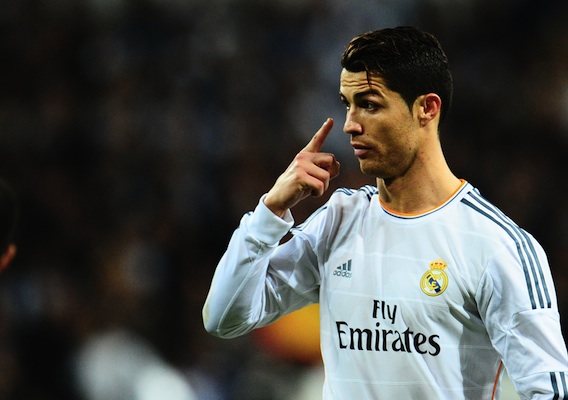 Portugal's Real Madrid is rounding into the form of his life just ahead of the World Cup, but the United States' worries don't end there. Blake Thomsen's weekly Group G Watch has the essentials.
BY Blake Thomsen Posted
March 25, 2014
9:29 AM
THE UNITED STATES' Group G foes had a solid week, with multiple players from Germany, Ghana, and Cristianogal all delivering standout performances. ASN brings you all the news and videos you need—especially here, with our exhaustively researched and constantly updated Brazil 2014 Channel.

The in-form Andre Schurrle strengthened his case for a place in Germany’s XI with a superbly taken far post finish in Chelsea’s 6-0 evisceration of Arsenal on Saturday. Check out the clinical goal (as well as the soothing sound of Ian Darke’s voice) below. While Schurrle starred for Chelsea, his international teammate Per Mertesacker struggled mightily at center back for Arsenal. Mertesacker is definitely in the running for a starting spot in Brazil, but performances such as this will not help his case. (Although they could help Jozy Altidore and/or Aron Johannsson find the scoresheet.) Elsewhere in the Premier League, Portugal’s Nani made his long-awaited return to the Manchester United bench after more than three months out. The enigmatic winger can be brilliant when healthy, but injuries and other issues have limited his effectiveness for club and country over the past few years. Soccerway.com's excellently compiled data outlines his extensive injury record. Injuries (and patchy form) aside, Nani is still a guaranteed starter for Portugal when healthy. It’s certainly in the best interest for the U.S. if he fails to rediscover his form before the Premier League season ends.

Cristiano Ronaldo added three more goals last week, including another brace in the Champions League against Schalke and an unstoppable penalty in El Clásico against Barcelona. Be afraid. There’s little more to be written about Ronaldo at this point—stopping him will be priority No. 1 for the U.S. when it meets Portugal on June 22.

Two German internationals were on target for Borussia Dortmund in its 3-0 cruise over Hannover. Center back Mats Hummels scored an opportunistic goal following a corner while Marco Reus marked his return from injury with a fine finish from a tight angle.
Hannover 96 - Borussia Dortmund 0:3 All Goals... by Goals_Highlights Somewhere, Alexi Lalas nods grimly and utters something about the importance of set pieces (and Ratt). League leaders Bayern Munich deviated from its normal course of action and sort of almost didn’t win its Bundesliga game over the weekend, waiting until the 82nd minute to score the go-ahead goal in an eventual 2-0 win at Mainz. As usual, Germans were heavily involved in the goals. This time it was Bastian Schweinsteiger who opened the scoring with a smart header before Mario Gotze finished emphatically into an almost-empty net to seal the game. Ligue 1 Nelson Oliveira has made an impressive rise to the Portuguese national team, and he underlined his credentials by providing the assist on Abdoulaye Doucore’s game winner in Rennes’ 1-0 triumph over Marseilles. Oliveira will likely start on the bench in Brazil, but the speedy center forward may be called upon as an impact sub.

Ghana’s Christian Atsu continued his surge for a starting spot in Brazil and delivered a very clever chip for Vitesse over the weekend (go to :20 mark). The 22-year-old Atsu is performing at a level that will make him hard to leave out of the Ghana XI. Juve’s Kwadwo Asamoah has the left wing spot locked down, but Atsu could very well feature at right wing over Andre Ayew, who has missed much of the season with a knee injury.

Asamoah Gyan continues to benefit from shambolic defending in the Gulf League as well as the Asian Champions League. See below at the :20 and 3:18 mark for his two goals against Tractor Sazi in the ACL. He also netted a penalty in Al-Ain’s weekend loss in league play. Regardless of how poor Gyan’s competition is, American fans and players alike need only look back to 2010 to be reminded of just how dangerous the Ghanaian striker can be. Blake Thomsen is an ASN contributor who has as many appearances for Manchester United in 2014 as Nani does. Follow him on Twitter.