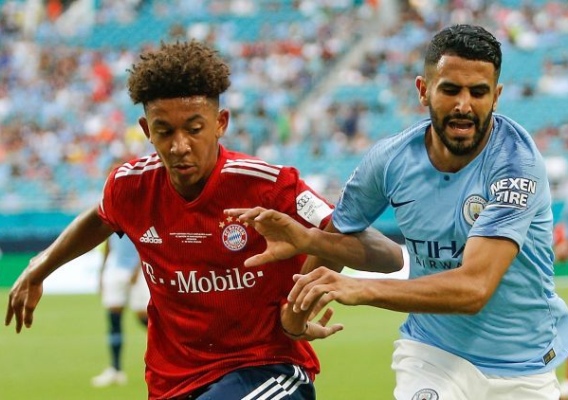 Robinson, de la Torre, CCV, and Richards among those to watch

ASN was slow last week for a much needed vacation and we are easing back into it all this week. There has been a lot of news to catch up on so here is a new edition of our Preseason notebook.
BY Brian Sciaretta Posted
July 29, 2018
2:00 PM
AS THE European preseason enters into its final weeks there are several key young American players are in tight situations as they fight for minutes. Here is a breakdown.

Robinson at a crossroad


United States national team left back Antonee Robinson, 20, is one of the most interesting American players so far this European preseason.

Last season, Robinson went on loan from Everton to Bolton for his first professional first-team season where he helped the club avoid relegation out of the Championship and played over 2500 minutes. This season he is back with Everton and playing very well in preseason.

Robinson is presumably behind Leighton Baines, 34, but Baines is frequently injured and it seems as if rotation would give Robinson a chance to play somewhat regularly in the Premier League this season. But now Everton are closing in on signing another left back in Lucas Digne from Barcelona.

Bolton still wants Robinson back for another loan and has been public in expressing this desire. Now there is this report:


Everton have given Bolton Wanderers permission to hold talks with Antonee Robinson about re-signing him on loan until the end of the 2018/19 season, but Everton will only loan him out if he signs a new contract with the club. (Source: Daily Mail) pic.twitter.com/mBFBD3BlqD

It is tough bargaining by Everton but Robinson needs to play. If the value of the contract offer is good, he should consider taking it and returning to Bolton. Two seasons as a full-time starter will dramatically enhance his resume.


Last year, 2017 U.S U-20 World Cup midfieler Luca de la Torre rarely played for Fulham and was stuck in the youth leagues for the London-based club. In total, he played in only five games totaling less than 60 minutes.

It would naturally seem that with Fulham heading to the Premier League, de la Torre’s prospect for minutes would diminish. But so far this preseason, the San Diego native has been playing regularly for the club. Playing as a second half sub against Lyon and starting against Fiorentina.

It is a tough situation to read but if de la Torre features for Fulham this year somewhat regularly, it would be a significant accomplishment.


Bayern Munich is looking to make a splash in the American market and after seeing Weston McKennie and Christian Pulisic have significant impacts in the Bundesliga, it is also looking at the American youth pipeline. The recent partnership with FC Dallas is bearing fruit and U.S. U-20 central defender Chris Richards, who is on loan from Dallas, featured heavily on the team’s preseason U.S. tour.

Still new to the professional game, Richards was a substitute in a 3-1 win over Paris St. Germain, he played 45 minutes in Bayern’s 2-0 loss to Juventus in Philadelphia and then went a full 90 in a 3-2 loss to Manchester City.

As Bayern manager Niko Kovac said of Richards: “He’s a very talented player. He’s great in training. He’s played great in two games. He has to work a lot; however, he will get the time, and if we need him, he’ll be ready.”

While Richards will feature for Bayern’s U-19 team at the start of the year, it would not be surprising to see him get first team minutes if Bayern can separate from the pack in the Bundesliga and need depth due to Champions League games.

While Richards is a big winner in all of this, so is FC Dallas. The team’s partnership agreement with Bayern is paying dividends and getting players to have access to unbelievable experiences. Now, if Bayern really want Richards, FC Dallas will be in line for a nice payday.

Carter-Vickers in action for Spurs


Cameron Carter-Vickers has been seeing regular minutes for Tottenham so far in the preseason – which is expected as Spurs are still without some key players due to the World Cup.

Most recently, Carter-Vickers started for Tottenham Saturday night against Barcelona in Los Angeles. The game was won by Barcelona in a shootout after a 2-2 draw.

Carter-Vickers played well. He was partially responsible for the opening goal and his positioning was questionable at times. But he also made some great plays to break up dangerous passes and opportunities.

The English-born Carter-Vickers has flaws in his game but he is still able to play well at a high level. If not at Spurs, there should be a long list of teams ready to take him on loan.


Everyone knows the success of David Wagner at Huddersfield but Wagner was born and raised in Germany. The amount of American born and raised managers in Europe is very small. Essentially, it is one man: Joe Enochs.

Last year, Enochs was fired by Osnabruck despite years of success managing the club – where he was a legend as a player and in the front office. The firing ended a relationship of over 20 years.

But Enochs landed on his feet quickly and is now the manager of FSV Zwickau. On Saturday, Enochs and Zwickau defeated Hallescher FC 2-0 in the opening game of the 3.Liga.