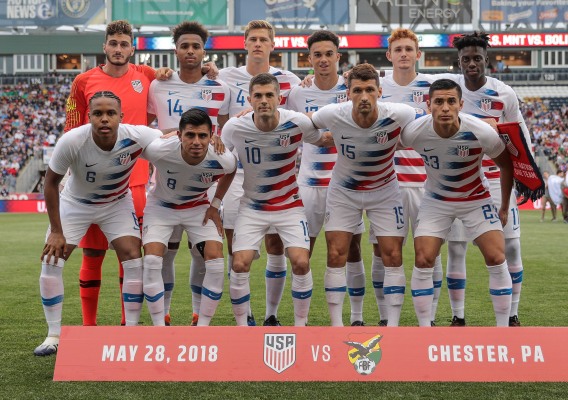 Robinson and McKennie impress in win over lowly Bolivia

The United States national team gave a bunch of kids a chance to play against a terrible Bolivia team and overall it was a fun confidence booster but will likely soon be forgotten. ASN's Brian Sciaretta is here with his player ratings
BY Brian Sciaretta Posted
May 28, 2018
5:30 PM
THE UNITED STATES national team cruised to a comfortable 3-0 win over a very poor Bolivian team on Monday night in Philadelphia. It was a fun game although tough to asses given the opponent. Still it was a fun confidence boost to a very young American squad.

Behind goals from Walker Zimmerman, Josh Sargent, and Tim Weah, the United States dominated from the opening minutes.

Here are the match ratings


Alex Bono: Making his debut, the Toronto FC backstop was untested but had some decent distribution. Tough to draw any conclusions either way other than he’s still in the mix moving forward. Rating: 5.5

Antonee Robinson: The Everton-signed left back had a great first cap and his speed is extremely valuable. In the second half, he was in poor position on one Bolivia’s rare dangerous plays but his speed bailed him out. His assist on Weah’s final goal was one of the best plays of the game. He’s exciting and fun to watch. It is easy to see him with a bright future for the U.S. team this cycle. Rating: 7.5 and MOTM

Walker Zimmerman: His first-rate header gave the U.S. team a 1-0 lead. Defensively, it was easy going for him as Bolivia’s attack was non-existent. Nice passing out of the back too. Rating: 7.0

Erik Palmer-Brown: Helped keep a clean sheet in a game where he was rarely tested. Not a bad first cap but it will be interesting when the games get more challenging. Rating: 6.0

Eric Lichaj: Wearing the captain’s armband, Lichaj put forth a mature performance where he locked up the right side defensively and chose his times well to push into the attack. Rating. 6.0

Weston McKennie: He was a nice cog in the middle of the field. His defensive play set a nice tone early and Bolivia had nothing going for it centrally in the attack. His passing was concise but he brings some much needed grit. Rating: 7.5

Joe Corona: He had some nice moments, including a fine delivery on the corner kick which set up Zimmerman, but overall failed to impose himself against a bad opponent. Rating: 5.5

Christian Pulisic: It was a disappointing effort from Pulisic who looked tired and badly in need of a break after a long season. It’s too bad this game in Pennsylvania was sort of a homecoming for him. Aside from a few nice moments, he didn’t come close to making the impact he can. Rating: 5.0

Tim Weah: In the first half, Weah was on the ball all of the time. His final ball lacked but his movement was lethal. In the second half, he got a deserved goal when he slammed home a perfect pass from Robinson. He’s raw but the potential is clearly there. Rating: 7.0

Rubio Rubin: Rubin moved well and was able to get himself into dangerous positions. His final ball sometimes let him down (and in the second half, he tripped on his best chance) but he reads the game well. Hopefully with more minutes at Tijuana next year, he’ll be able to execute. Rating: 5.5

Josh Sargent: The St. Louis native had the best U.S. national team debut for a forward since Juan Agudelo in 2010. Sargent scored his first international goal after taking advantage of a terrible goalkeeping error from Guillermo Viscarra and making him pay for it with an effective finish. But Sargent was dangerous throughout and earned a nice grade. Rating: 7.0


Julian Green: The Stuttgart signee saw a lot of the ball in his minutes but didn’t do much or combine effectively with his teammates: Rating: 5.0

Andrija Novakovich: The Reading signee was aggressive up top and made some nice runs. While he did not get the best of service late in the game, he worked extremely hard, particularly on one play where he took on two defenders, never gave up, and earned a corner. Rating: 6.0

Keaton Parks: The Benfica product from Texas proved to be an interesting prospect and his passing was very clean. It will be interesting to see him as he gets more familiar with his teammates. Rating: 6.5

Matt Olosunde: He looked shaky in his limited minutes and was a clear step down from Lichaj. He badly needs professional minutes. Rating: 5.0

Lynden Gooch: After a tough season with Sunderland, he looked very rusty. Another player who needs to take advantage of every chance he gets. Rating: 4.5

Jorge Villafana: After winning a Liga MX title, Villafana only got a few minutes at LW and did not do enough to get a rating. Rating: NR


Dave Sarachan: This was a better game than the Paraguay friendly in March because Sarachan gave more young players an opportunity. As expected, some players took advantage and others did not. Bolivia was bad but the players all had the same opportunity to make a case to Sarachan, or the next GM or the next coach. Sarachan’s job was to play kids while giving them some sort of framework to succeed. Done and done. He won't be the next coach but he will at least hand over a more prepared group of youngsters. Rating: 6.0