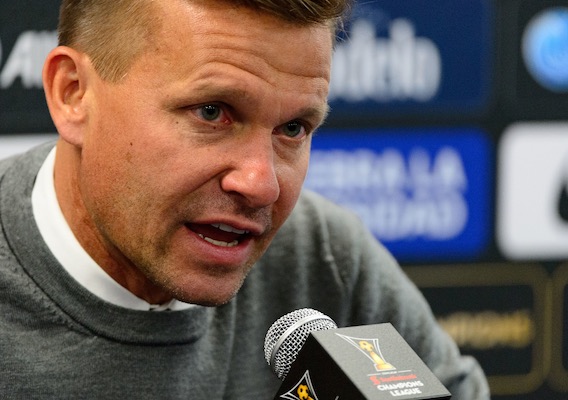 The 2016 Supporters' Shield winners have staggered out of the gate in 2017, and Jesse Marsch's 4-2-2-2 formation is the likely culprit. Franco Panizo examines the Red Bulls attack and what needs to change.
BY Franco Panizo Posted
April 05, 2017
1:00 PM

ONE OF THE MOST POTENT ATTACKS in MLS has gone cold. Its players look uncomfortable, goals and chances have been hard to come by, and poor results and performances are becoming more frequent.

A major reason for all of that: the change to an unconventional formation.

The New York Red Bulls have been one of the top dogs in the Eastern Conference for several years now, but it has looked a shell of its former self so far in 2017. The club has posted a decent 2-2-1 record through the first month of the campaign, but it is struggling to leave its imprint on games. The turnovers high up the field that New York has forced with regularity since Jesse Marsch took over as head coach have been less frequent this season, and the attack is not generating very many clear-cut scoring opportunities despite boasting a good bit of talent.

All that was largely overlooked or chalked up to the early-season rust that plenty of teams show in March when MLS is just getting underway, but the Red Bulls’ continued troubles in this narrow 4-2-2-2 formation have persisted.

Chief among the concerns is where exactly is the high-powered attack? The Red Bulls have scored just five times this season, and two of those tallies were own goals that gave the club its two wins to date. What’s more, New York has failed to come out victorious in its last three matches—including a scoreless draw at home vs. a depleted Real Salt Lake—while being outscored 7-2 in that span.

This past Saturday’s disastrous defeat on the road against the Houston Dynamo can be chalked up to poor defending more than anything else, but the 4-1 loss also highlighted the Red Bulls’ inability to keep themselves in games by outgunning opposing teams. New York was able to do that more often than not in the past while using a 4-2-3-1 setup, but has found it tough this year in the 4-2-2-2 look.

Marsch now appears to be reconsidering his tactical shift.

“We’ve played a lot with two strikers and we don’t seem to be rewarding ourselves and getting ourselves enough leads with that,” Marsch told reporters after the humbling result this weekend. “We’ve got to visit a lot of different things right now and think about how to get better, because we’ve been a little bit flat and a little bit stagnant and a little bit same level of performance for too many games.”

Marsch was asked if reverting back to the tried-and-tested 4-2-3-1 formation could be in the cards, and he responded by saying "possibly" three times.

If the club is hoping to get back to basics, moving into that familiar system would make sense. New York found plenty of success over the past two years in that setup, forcing scores of turnovers with its trademark high press and turning them into quality chances and goals that led to wins.

The 4-2-2-2 look has robbed New York of that, however. While a big emphasis behind Marsch’s tactical change was admittedly to try and keep the Red Bulls more compact so as to not give away as many chances on the break, it has taken players out of the areas of the field in which they feel most comfortable.

For instance, 2016 MLS Golden Boot winner Bradley Wright-Phillips is not being utilized as the primary scoring threat up top. After years of serving as the lone striker for the Red Bulls to great effect, the Englishman now has to share the penalty area with a forward partner. That requires Wright-Phillips to read runs so as to not occupy the same space, and figure out when and who to press. The tactic might lessen the load for how much running he has to do defensively, but it is coming at a cost. He has only six shots on goal this season.

“My job is to score goals and work hard,” said Wright-Phillips last month of the new formation. “When I play even (as the one forward), that’s what I’m trying to do. It’s all right. I don’t mind it. We’ve got to get better—just like we had to when we started our normal formation.”

Sacha Kljestan is also struggling to replicate the form that made him MLS’ top assist man in 2016. Kljestan is being pushed out wide a little more instead of playing centrally as an attacking midfielder. No, he is not tasked with getting up and down the sideline like a winger, but he is getting the ball in less dangerous positions and finding it tougher to slip dangerous balls in to the forwards in front of him.

It's no secret that Kljestan plays most effectively when is in the middle of the park, and it is also probably no coincidence that his first assist from the run of play this year came with him in that area of the field.

Those types of combinations have been the Red Bulls’ bread and butter since 2015. They led the club to a Supporters' Shield title and Conference Finals appearance that year, and also saw it finish in the top spot of the Eastern Conference in the regular season a campaign ago.

Getting back to that 4-2-3-1 might be the wisest move right now. The 4-2-2-2 setup has not yielded much success through the early parts of this season, and has made a talented attack look rather tame, especially if you throw in the two CONCACAF Champions League matches against the Vancouver Whitecaps that took place before the MLS season.

Regardless, the Red Bulls need to do something if they wish to get back to being an MLS Cup contender. The status quo simply just is not cutting it.

“I’ve got to think carefully,” said Marsch, “and look carefully at how we can get better.”