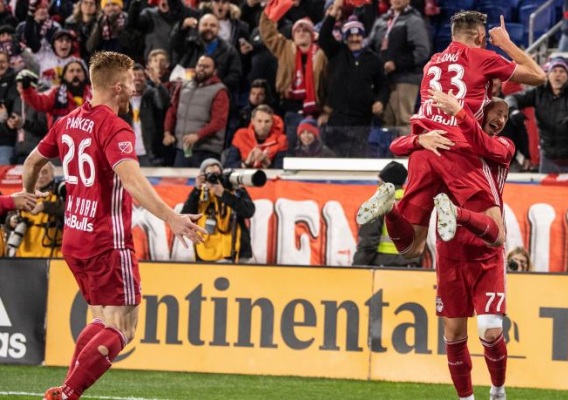 The Conference finals are set after some highly entertaining semifinal second leg games on Sunday. ASN's Brian Sciaretta was in Harrison for the Red Bulls game and watched the rest. Here are his thoughts on the latest round of the playoffs.
BY Brian Sciaretta Posted
November 12, 2018
4:00 AM
AFTER A ROUGH start in the first two games of the knockout stages, MLS and its fans have enjoyed a very good playoffs so far in 2018. The three games on Sunday were both high quality and exciting – and in the end saw the better talent of the New York Red Bulls, Atlanta United, and Sporting Kansas City prevail at home.

Here are some thoughts on the games.


No other team gets more contribution from within its own pipeline than the New York Red Bulls. It would be far more beneficial to U.S. Soccer and MLS if more clubs operated like New York. But it’s not simply that the Red Bulls give minutes to internally developed players, it’s that they can beat anyone in the league with these players.

Trailing 1-0 from the first leg, the Red Bulls equalized the game on a goal that came from a shot by Aaron Long which was later credited to Alex Muyl for a slight deflection. Long is the 2018 MLS Defender of the Year and his career never really got started until he joined the Red Bulls organization – which converted him into a central defender at its USL team (Long would win the 2016 USL Defender of the Year and Red Bulls II won the championship).

Then there was the winning goal, which was just a beautiful display of soccer from the Red Bulls. It came after a long stretch of passes – with the final two coming from Muyl and Tyler Adams, the crown jewel of the team’s academy. That all set up Danny Royer for a hard-driving finish from close range past Zack Steffen.


Beautiful soccer here from the Red Bulls.. the last 2 passes of this great sequence came from 2 local players developed by the club. That’s what separates this club from others and gives it an identity pic.twitter.com/p9Db2ImdDO

What is interesting about this game is that new Red Bulls head coach Chris Armas showed some really nice flexibility in this game to move Adams into a more advanced position. Playing further up the field, Adams was able to be the first line in the press and play a bigger role in the team’s attack. It paid huge dividends.

The Red Bulls, and before the Metrostars, have a long history of disappointing in the playoffs. A lot of the team’s fans were expecting disappointment on Sunday. This team took care of business.

Atlanta too much for NYCFC


This series was the most lopsided of the Conference semifinals. That is fitting given that NYCFC has really fallen apart after the coaching change midseason. Patrick Vieira had this team playing great soccer early in the year but after he left to take the job at Nice, Domènec Torrent has seen it take a nosedive.

It’s completely the opposite of the New York Red Bulls which didn’t miss a beat when Jesse Marsch left and Chris Armas came on.

NYCFC ends the season with so much uncertainty. There are no plans for it to move out of Yankee Stadium – which is the worst venue for soccer in the league. David Villa is unsigned and Yangel Herrera is likely moving to Europe. Torrent has done nothing to show that he is the right guy moving forward.

Meanwhile, Atlanta prevailed and was the better team but still looked overly conservative in its approach in the second leg. That seems unnecessary given that it has more talent than New York and was playing in from of an enormous crowd at home.

It starting lineup consisted of four central defenders with Greg Garza in the midfield. You would figure Tata Martino would just try to overwhelm a NYCFC team that was fading?

In the end of the day, Martino’s approach got the job done with a 3-1 (4-1 aggregate) win but there were times in the first half when NYCFC looked close to getting back into the game, only to have goalkeeper Brad Guzan bail them out.

Miguel Almiron is one of the best players ever in the history of this league and he was simply too much for NYCFC. He was a pleasure to watch.

Atlanta United will have a lot of decisions to make this offseason but this era of the club is coming to its end with a fitting run at MLS Cup.


Sporting Kansas City defeated Real Salt Lake 4-2 (5-3 on aggregate) to reach the Western Conference final where it will face the Portland Timbers. This game was far closer than the scoreline shows, and several times in the final 10 minutes it appeared as if RSL as going to find a winner.

For Real Salt Lake, it’s season ends further than anyone expected. First, simply getting the playoffs was impressive, and lucky. Second getting past LAFC in Los Angeles was nothing short of a shocker. Finally, having top-seeded Sporting Kansas City on the ropes with several good attempts at a winner, was also unexpected.

But RSL’s die-hard story finally came to an ended and a last second goal from Sporting Kansas City hid how close this series was.

Is Mike Petke the right guy for RSL? It’s a close call. His team benefited late in the season from some remarkable luck (Houston beating the Galaxy in the finale) and individual moments of brilliance (the Damir Kreilach wonder strike against LAFC) and that will cover up for some shortcomings.

That being said, the fact that RSL was able to have such a close game on the road against top-seeded Sporting while missing the suspended Albert Rusnak or rookie of the year Cory Baird (concussion protocol) is impressive.

But whether it be with his tenure with the Red Bulls or now RSL, it is a question whether or not he overthinks things at times. Key players can find themselves benched under Petke, for unclear reasons. This time it is Justen Glad.


Mike Petke overthinks his tactics and/or personnel choices way too often. Coupled with man-management that seems to land at least one worthwhile player in the doghouse at any given moment, and it's too much for a team of RSL's middling talent to overcome. #SKCvRSL

As for Sporting Kansas City, it was a tougher than expected series against Real Salt Lake and it might not give them all the confidence in the world against an upstart Portland Timbers team. Not to mention, Diego Rubio will be suspended for SKC for the first leg.

Sporting Kansas City will go as far as its aging but experienced backline will take it. Yes, Felipe Gutierrez can be a difference maker (and he was with two assists on Sunday) but Zusi, Besler, Opara, Sinovic along with Melia as a defensive unit make or break this team. Opara is 29 but the rest are all over 30. The rest of the international break will help but it will be curious if it can hold together.