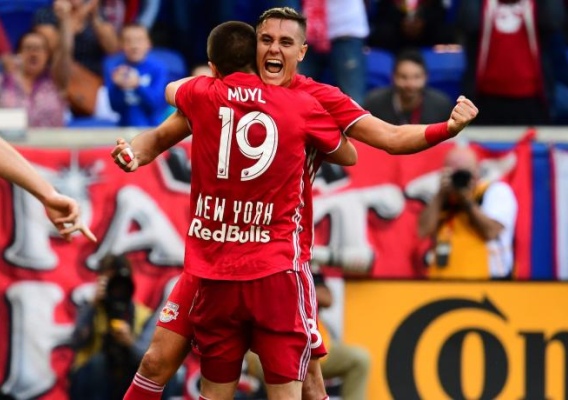 The MLS season is now in its final stages and the key races are clear. Either way, the Red Bulls, DC United, and the Galaxy were the big winners over the weekend while Djordje Mihailovic was awesome in Chicago.
BY Brian Sciaretta Posted
October 01, 2018
2:00 AM
This was a pivotal weekend in MLS as there were two huge games with DC United and the New York Red Bulls improving their stocks. Meanwhile, Zlatan is carrying the Galaxy towards the playoffs by himself, and NYCFC is sinking.


In what was billed as the biggest game of the MLS season, the Red Bulls rose to the occasion to sink Atlanta United 2-0 at Red Bull Arena. To make things even more impressive for the Red Bulls and worrisome for Atlanta, the Red Bulls were missing its two best players in the suspended Bradley Wright-Phillips and Tyler Adams – who missed the game due to back spasms.

There was a lot to chew on for this game but by far and away the top talking point is that Chris Armas vastly out-coached Tata Martino.

It’s obvious. First, the Red Bulls are known to press. While Armas has changed things up a little bit, the press is still a hallmark of the team. When you combine that with the fact that Adams and Wright-Phillips were out, it was only more likely that the Red Bulls would press more aggressively as a matter of sticking with a familiar system to make up for missing its two best players.

Martino had to know this was coming – but you wouldn’t be able to tell that with the way the game played out. Atlanta looked completely lost in the press. It almost seemed as if they were surprised by it. Atlanta could not get the ball out of their own half and were simply a turnover machine.

The Red Bulls, meanwhile, were flying. Without its two best players, the team looked entirely comfortable in the system and had a good understanding of their roles. When someone is missing (like Adams), someone else steps up. In this case it was Alex Muyl who was fantastic on the day and made the play of the game when he assisted to Tim Parker on the second goal.


Take another look at that run from Muyl. ???? #RBNYvATL pic.twitter.com/lZqyyaCqX3

Then, of course, you have the Red Bulls defense which is capable of shutting down any team in the league. This game showed why Tim Parker and Aaron Long belong on the U.S. national team to back up normal starters John Brooks and Matt Miazga.

And yes, the Red Bulls can play out of the back too. This was pretty to watch.

Despite the loss, the odds are that Atlanta still wins the Supporters Shield given an easy schedule the rest of the way. But this was a warning shot to Atlanta that the Red Bulls have them figured out and Martino has to do his homework in the playoffs.

Unfortunately for Martino, he is busy at the moment creating drama.


Via a translation from @FrancoPanizo (who asked the question in the press conference) - here is Tata Marino saying that he didn’t shake hands with Chris Armas after yesterday’s loss to #RBNY because he “prefers coaches who are low profile.” #ATLUTD #RBNYvATL https://t.co/IElmFe0rha

DC United rises to the occasion


While the Red Bulls – Atlanta game grabbed all the spotlights, there generally wasn’t that much on the line. Yes, there is the Supporters Shield but both teams were assured of a first round playoff bye. So generally the loser of that game had to deal with first world problems.

The DC United – Montreal game had everything at stake. If Montreal won, it would be in the driver’s seat for the final playoff spot in the East. If DC United won, it would control its destiny for that final spot and carry momentum as well.

In this game at the new Audi Field in the U.S capital, only DC United showed up. It was a dazzling performance from Ben Olsen’s group and Luciano Acosta was by far the best player in the league for the entire week with a goal and three assists in a 5-0 win.

As of now, it seems like it is only a matter of time before DC United surges into the playoffs. Montreal is good on the counter-attack but when they have to go up against teams that can finish their chances, they crumble pretty easily because then they have to come up with a different game plan. With Acosta, Wayne Rooney, and Paul Arriola provided an attack that Montreal just was not built to defend. DC United can finish chances and has the speed to run with Montreal when it counters.


Arriola’s second goal of the night in DCU’s biggest game of the season. Montreal is getting steamrolled https://t.co/VQHEYWAKqP

Montreal did have a few chances but Hamid came up big when needed. That was all it took for DC United to send Montreal to a deflating loss.

DC United might have struggled early in the season but everything is different now. Hamid is back and United is set in goal. The addition Wayne Rooney not only added strength at forward but it also made Luciano Acosta better. Then the return of Russell Canouse added to the team’s midfield spine. Finally, Arriola’s final ball is vastly improved and with that is a much better DC United squad.

Assuming DC United gets into the playoffs, it could face New York City which is has devolved into train wreck since Patrick Vieira left.


DC United is not the only team that was once left for dead but now look like it is post season bound. The LA Galaxy trail Real Salt Lake by two points with three remaining but momentum is everything at this time of the year, and the Galaxy has it in droves. Real Salt Lake is winless in three and has none of it.

Zalatan wanted the spotlight and the Galaxy’s poor midseason has only made its recent rally more noticeable. As a result of its terrible losses only weeks ago, these final games of the season have now become more important and more desperate for the Galaxy. It has given Zlatan the stage he loves.

The Galaxy rolled past Vancouver on Saturday in Carson by a comfortable 3-0 scoreline and Ibrahimovi? was, unsurprisingly, the best player on the field with two goals. The first was via a penalty and the second was just ridiculously brilliant. He now has 20 goals in 24 appearances over just 1873 minutes. That is a goal every 93 minutes.

It almost would have been boring if Zlatan did things the way Robbie Keane or David Beckham did. Those teams were deep and well-coached. Zlatan is surrounded by a few good players in Ola Kamara, Romain Alessandrini, and Sebastian Lletget. But mostly it is Zlatan carrying a hot mess – and winning. The deck was stacked in favor of Beckham. The deck is stacked against Zlatan.


Somehow, this wasn’t allowed a goal. Bad calls happen but there is a higher standard for VAR. Somehow it was through the use of VAR that this own goal was disallowed for a foul. It seemed obvious that it was just two players going for the ball.


Philadelphia should have had three points in this.


What is wrong with NYCFC? The answer is a lot.

Yes, New York City was missing David Villa or Maxi Moralez who were both rested but when you look at what the Red Bulls can pull off without its two best players and why NYCFC can’t do without its best players, and you can see the absence of a real system in place for NYCFC. The Red Bulls players know what to do and know their roles so the team can continue on while missing a few players.

NYCFC can be a good team when everyone is available. But so what? That’s true for a lot of teams. The real test of a coach is to put together a system that can function throughout a whole roster. Domènec Torrent just has everything revolving around a few stars. There really isn’t a Plan B for NYCFC right now.

Would anyone take NYCFC in a one-game playoff matchup against DC United right now?

Mihailovic: one to watch


The Chicago Fire’s American teenage midfielder Djordge Mihailovic, 19, has always had talent. He has good technique and skill. Unfortunately, last year he tore his ACL in the playoffs and missed most of this season.

The good news is that he is back on the field and it looks like his ACL injury is a distant memory. His first few appearances were, understandably, rusty. But now he playing at a high level – which makes Chicago’s poor season even more unfortunate in that Mihailovic won’t be in the playoffs.

On Saturday, Mihailovic had a goal and an assist in a 3-1 win over LAFC. His goal was spectacular.


What a sick goal from Chicago’s Djordje Mihailovic today. The American teenager could certainly factor into the U.S U-23 team next year. Great to see he has bounced back so well from the ACL surgery last year. pic.twitter.com/bZaBZNFMEI

His assist was also first rate.


What a goal from Chicago as they burn the LAFC defense. Aleksander Katai gets the goal but credit to Nikolic and Mihalovic as well for setting that up!

Next year is going to be a big year for Mihailovic. He should be able to play with Chicago from the start of the season. On top of that, the U.S. U-23 team will begin play with Olympic qualifying starting in the later part of 2019. Mihailovic should be a factor for that team.