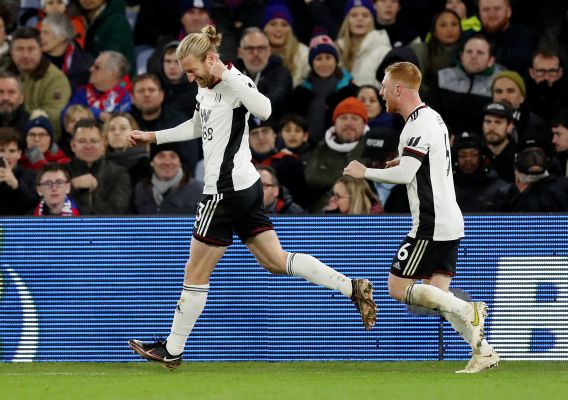 Tim Ream's great year just keeps getting better with a goal and a new contract. Also, Americans abroad had a very mixed Boxing Day. Finally, U.S. Soccer seems set to lose a top prospect to Argentina. ASN's Brian Sciaretta offers up his thoughts on the news.
BY Brian Sciaretta Posted
December 27, 2022
3:50 AM

CHRISTMAS IS OVER, the World Cup is over, and American soccer is set to return to normal. European leagues are gradually coming back with England resuming on Boxing Day. MLS preseason is set to open at the end of next week. The transfer window will also soon open, and the normal course of events will resume.

With the start of the first week after Christmas, here is a brief rundown of the news.

Tim Ream, 35, is a finalist for U.S. Soccer’s Player of the Year on the men’s side. The evidence continues to mount that he should win it. On Monday, Ream helped deliver Fulham a 3-0 Boxing Day win on the road over Crystal Palace in a London Derby.

With Fulham up 1-0 and Crystal Palace reduced to nine players after two defenders were sent off, Ream got on the end of a scramble following a corner kick to send home a classy finish for a 2-0 lead. It was his first Premier League goal.

Fulham’s comfortable win saw it move to eighth in the Premier League table (at least for now, they have played more games than most teams).

But for Ream, the news got even better as it was announced after the game that he had signed a new deal with Fulham to remain at the club through the end of the 2023/24 season. He was set to be a free agent after this season but he is playing the best soccer of his career despite now being 35.

There has always been speculation that Ream would be a target for St. Louis SC which will mark its inaugural season in MLS in 2023. Ream told ASN in November that he felt he could play another three seasons. Ending his career in his hometown in St. Louis makes sense, but he is well settled in London and is well loved in Craven Cottage. Why change a good thing?

Tyler Adams and Christian Pulisic both had great moments in 2022, but Ream has the most complete resume.

Ream was not the only American to play in Fulham’s 3-0 win over Crystal Palace. The game also featured Antonee Robinson and Chris Richards.

For Robinson, it was his usual steady self although Fulham was not tested much defensively after Palace went down to 10 men. He continues to be a dangerous attacking left back who has the athleticism and the speed to be a valuable asset in the Premier League.

For Richards, his situation is a bit of a concern. He played 30 minutes in the loss, and he wasn’t at fault for either of Fulham’s goals that came after he was subbed on. It was a very difficult hand to come into a game with a team trailing 1-0 and down to nine men.

It’s obvious that the plan wasn’t for Richards to play in this game. He didn’t play much in recent friendlies since teams returned to camp from the World Cup break. Usual starter Marc Guéhi was suspended for Palace against Fulham. But Palace boss Patrick Vieira went with James Tompkins instead of Richards. Tompkins was eventually sent off.

Richards, 22, has had a tough year. He made just six appearances for Hoffenheim in the second half of last season. Now he’s made just three for Palace (for a total of 44 minutes). He’s barely played 600 minutes of league soccer this year. Injuries have set him back this year.

The problem for Richards is knowing where the minutes will come from in 2023. He will have to seize any opportunity he gets. If suspensions and injuries allow him to play on Saturday vs. Bournemouth, he must seize the opportunity.

A busy slate of Boxing Day games in the Championship didn’t yield anything particularly positive.

The best news came from the goalkeepers. Zack Steffen made four saves and allowed one goal for Middlesbrough in a 4-1 win over Wigan Athletic.

Boro was once sitting in the relegation zone but now has five wins in its last six games to move all the way into 10th place. The club is surging, and Steffen has been part of that.

Those games also brough news for other Americans. Matthew Hoppe, 21, played the final six minutes for Middlesbrough and his club situation is concerning as he sparsely plays for Boro (54 minutes all season) and is limited to mop-up time.

In my opinion, Hoppe doesn’t need a move. He doesn’t need to join his fourth club in under two years (none of which were loans). He hasn’t gained traction under two managers at Mallorca and now two at Middlesbrough. He needs to fix the reason why that’s the case.

Josh Sargent, 22, meanwhile went the distance for Norwich in a very ugly loss. The U.S. national team attacker played mostly on the wing. But Luton Town’s winning goal came in stoppage time after Luton Town was reduced to 10 men in the 80th minute. Sargent fought hard, won his duels, but was limited to just one shot (which was blocked). He is handling the physical side of the game in the Championship very well, but his production on the wing hasn’t been great.

But changes are coming for Sargent and Norwich as head coach Dean Smith was fired on Tuesday. We have no idea how this will affect Sargent until we know the new manager.

Craig Shakespeare and Liam Bramley have also left the club.

We would like to thank them for their time here and wish all three well for the future.#NCFC

Lynden Gooch has been converted into a right back this season at Sunderland and is doing well. The Santa Cruz native went the distance on Monday in a 2-1 win over Blackburn. His attacking nature and his physical strength have seen him fit well into the position.

What is most impressive is that he’s been a key part of Sunderland’s strong start to the season. Fresh off earning promotion to the Championship, Sunderland is currently sitting in eighth place. The club clearly looks to be relevant again and Gooch has been a part of that (after being affiliated with the club since he was 10).

Daryl Dike started and played 64 minutes for West Brom in a 2-0 win away at Bristol City. Dike, 22, was quiet and managed just three shots. He is still getting his rhythm back as he missed most of the first half of the season due to injury. This was his fourth appearance since play resumed since the World Cup. He had one great outing off the bench against Sunderland with a goal and an assist but has been quiet in the other games. 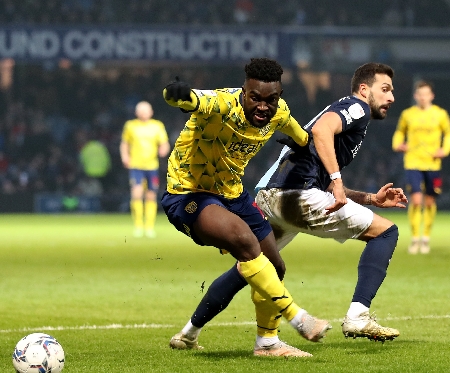 For Dike, he needs to return to the level where he is always dangerous and can impact games by his presence – even if he doesn’t score. He isn’t there yet, but it should come with time.

Duane Holmes started for Huddersfield and played very well in a 2-1 win over Preston North End. It was a much needed win because while Huddersfield remains in last place of the Championship, the gap for clawing out of the basement is now down to two points.

Holmes, 28, was born in Georgia but was raised in UK. Huddersfield is his hometown club and he hit this milestone.

Finally, in League One, Hartford-born Alex Mighten started and went the distance for Sheffield Wednesday in a 2-1 win over Fleetwood Town. Mighten, 20, has been playing as a right wingback in a 3-5-2 formation. On loan from Nottingham Forest, Mighten is gradually playing more in the third tier and has Sheffield Wednesday in third place as they contend for promotion.

Mighten’s agent has said that he is in the process of switching his international representation from England to the United States. He could be a factor for the U.S. U-23 team in 2023 as it prepares for the 2024 Olympics.


In what was very surprising news on Monday, Genk lost to Kortrijk 1-0 on Monday. It was a big upset and Genk's first loss of the season. In its last 16 games before the World Cup break, Genk won 15 games a drew one. With the loss, Genk’s lead atop Belgium’s First Division shrunk from 10 to seven points. 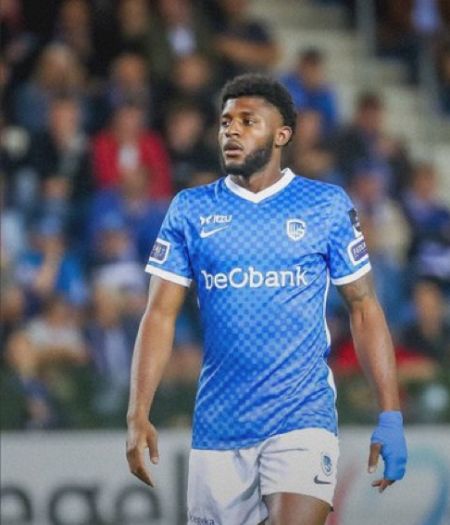 Mark McKenzie, 23, went the distance for Genk. The former Philadelphia Union product is looking to build up his case to be a regular on the national team and winning the Belgian league will only help that case. A loss was always going to happen for Genk, but the concern is that the World Cup break really hurt the team’s momentum.

Turkey’s Super Lig has resumed from World Cup break and Haji Wright hasn’t had a great time. On Tuesday, Antalyaspor dropped a 2-0 decision to Istanbul Basaksehir and that comes off a 2-0 loss to Ankaragucu at home on December 23rd.

Wright has had a big year in 2022 where he scored 19 goals in the Super Lig and then a World Cup goal (albeit with a bit of luck). But the year will conclude with two tough outings where he really struggled to get involved.

That in and of itself is a massive accomplishment as Cremaschi is the only 2005-born player on the roster and is actually playing up a U-20 cycle.

Cremaschi was born and raised in Florida and has represented the United States youth national teams. This year a lone he has played with the U-19 team twice and the U.S. U-20 team in October when it worked with the domestic-based full national team players ahead of the World Cup. 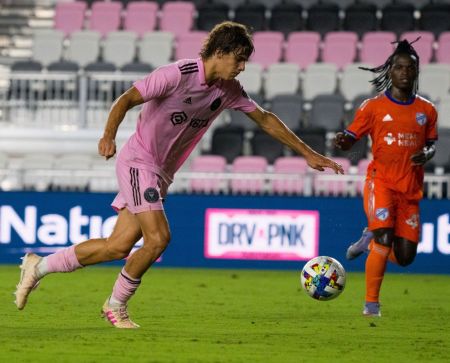 Cremaschi has not made Argentina’s U-20 Championship team yet but he has an excellent chance as Argentina clearly rates him and surely understands U.S. Soccer will put him on their U-20 World Cup team if Argentina does not. If Cremaschi plays for Argentina in the CONMEBOL tournament or the U-20 World Cup, he could then only return to the United States via a one-time switch.

Should Cremaschi bolt for Argentina and make their team, it would be a significant loss for U.S. Soccer as Cremaschi is one of the country’s best 2005-born prospects. At this point, U.S. Soccer cannot afford to lose top prospects.

Regardless of what country he chooses, Cremaschi is in a great position – as is Inter Miami. Having the youngest player on Argentina’s U-20 team and one of their top 2005-born prospects as well is a big deal. His value will surge as a result. It will also be very interesting to see how Cremaschi plays this season for Inter Miami as he is likely to break into the first team.

The loss of a top prospect would sting for U.S. Soccer and if Argentina wants Cremaschi and Cremaschi wants to play for Argentina, there isn't much that can be done to stop it. Free will always wins. But the fact that top programs like Argentina are looking here for talent is encouraging and as more MLS teams become invested in youth development, more prospects like Cremaschi will emerge. The U.S. U-20 team remains very good and the 2005-born class is still strong, although it would be much stronger with Cremaschi.