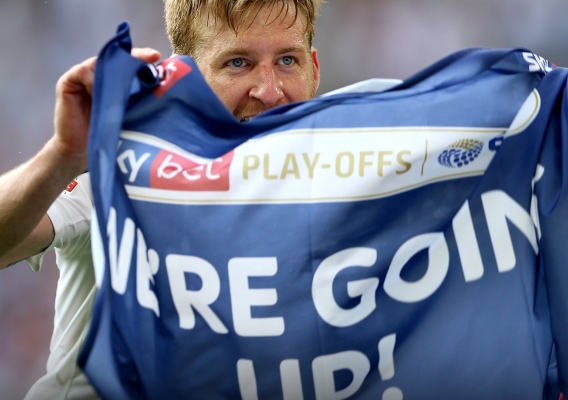 Tim Ream capped off a fantastic season by helping Fulham win promotion back to the Premier League in a victory the sports richest game. Elsewhere, there is something wrong with Toronto but FC Dallas is back on track. The officiating in MLS, however, is terrible.
BY Brian Sciaretta Posted
May 28, 2018
5:00 AM
TIM REAM WILL join the short list of Americans in the Premier League, Zack Steffen continues to excel, Toronto has big problems, and bad officiating are just some of the many stories in American soccer over the weekend.

Of course with the United States national team currently assembled in Philadelphia, most of the attention is on that. But meaningful games are still a long ways off for the stars and stripes. But other American players at their clubs, the stakes were quite high.


Tim Ream, 30, has had a great season and on Saturday he capped it off by helping Fulham return to the Premier League for the first time since 2014. After Fulham was in midtable on December 17, the London-club went on a remarkable run and nearly qualified for promotion outright but saw its 23 match unbeaten run snapped with a loss to lowly Birmingham City.

In the final of the Championship promotional final at Wembley Stadium, the richest game in the world, Ream stood tall in a 1-0 win over Aston Villa. Fulham took the lead in the first half, but with Denis Odoi shown a red card in the 70th minute, Ream and the defense was put to a test.

In the end, Fulham prevailed and Ream capped off one of the best seasons for an American player this season. Now he will return to the Premier League for the second time after joining Bolton’s failed relegation battle in 2012.


Zack Steffen, 23, is probably going to be the number one goalkeeper for the United States national team for years to come and it is easy to see why. After helping Columbus to a scoreless draw on Sunday against Kansas City. That brought his scoreless streak to 415 minutes and the Crew has not allowed a goal in the month of May.

That's the #CrewSC record for @zackstef_23! His 4??1??5?? minutes of scoreless soccer has never been done before in club history ???????? pic.twitter.com/qZbRZOMOvx

Toronto FC has a lot of talent and has a lot of problems. That was compounded on Friday night when it posted yet another loss, this time to FC Dallas, to remain in ninth place in the Eastern Conference.

Of course Toronto still has the ability to turn it around and the club has been dealing with a lot of injuries. But the fact that it is losing games at home against teams it is still more talented than (even with the injuries), suggests a problem.

In the loss on Friday, FC Dallas raised its game. In particular thanks to some familiar faces. Goalkeeper Jesse Gonzalez was first rate and reminded fans why he was so highly rated when he filed his one-time switch from Mexico to play for the United States (which he is still yet to represent). The Mexican-American stopped Sebastian Giovinco three times, including a penalty, to preserve the impressive cleansheet.

Also of significance for both Dallas and the United States national team is that Kellyn Acosta is continuing to impress in his comeback from a sports hernia surgery – an injury which ASN understands has been bothering him for over a year. Acosta is close to getting back on track to being one of the key American central midfielders.

These are worrying times for Toronto but optimistic times for a pair of players who will be part of the U.S. national team player pool moving forward.


The officiating in MLS continued to give itself a bad name on Sunday night when Columbus Crew midfielder Christian Martinez took a swing at Sporting Kansas City’s Seth Sinovic in an attempt to slap in in the face. It was not even reviewed by the officiating.

The idea behind video assistant review is still a good thing in that it attempts to get the important calls right. But time and time again, this league is making things worse in that the decision as to when to use video review has become completely arbitrary. Penalties and obvious red cards should always be looked at and these reviews should not take much time.


So.... Apparently this doesn't warrant video review? Anyway, Martinez is unbelievably fortunate to still be on the pitch. I have no explanation for this. pic.twitter.com/gKdLm88qAu


And Michael Parkhust had the tweet of the day regarding this.


Good news everybody... we’ve hit max VAR usage for the season. Guess it’s back old school from here on out

Romain Gall, 23, is continuing to put himself in a great position heading into the summer transfer window as the former U.S. U-20 and Columbus Crew attacker cannot stop scoring for GIF Sundsvall in the Swedish Allsvenskan.

With a goal in Sunday’s 2-0 win over IFK Goteborg, the Paris-born Gall now has seven goals and four assists in 12 games across all competitions in 2018.

Gall’s goal in the 34th minute opened the scoring in the game but the goalkeeping for IFK left a lot to be desired.