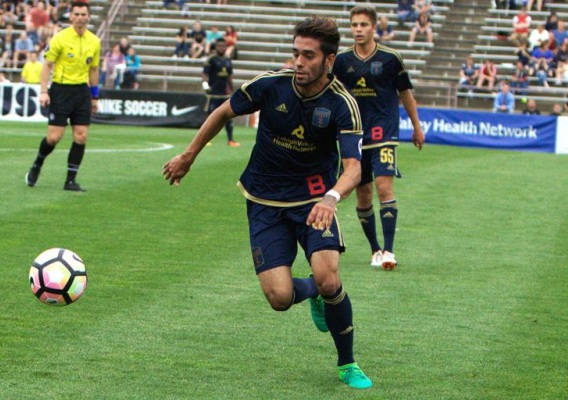 Behind head coach Jim Curtin and technical director Earnie Stewart, the Philadelphia Union have made a heavy push with giving significant minutes to young players. The latest two to join the push are the current U.S. U-20 duo of Matthew Real and Anthony Fontana who have progressed through the team's academy together.
BY Brian Sciaretta Posted
April 13, 2018
11:10 AM
As MAJOR LEAGUE SOCCER gets older, the various teams have begun to develop distinct identities. There is the star power of the Galaxy, the heavily foreign approach of New York City FC, and the homegrown reliance of the Red Bulls. For Philadelphia Union right now, there is now a heavy emphasis on promoting internally with local domestic talent.

Before the start of the year, it was expected that two homegrown players in Auston Trusty and Derrick Jones would see regular minutes under Jim Curtin after both players participated in the 2017 U-20 World Cup. But the team has placed additional emphasis on its youth movement as  Anthony Fontana and Matthew Real, two members of the current U-20 team, are seeing minutes (with fellow U.S. U-20 defender Mark McKenzie also now having appeared on the bench).

Of course playing youth requires patience from the organization as the players adjust to the speed of first team soccer and make mistakes along the way. So far, Philadelphia has had a slow start to the season with just five points through four games.

But for Real and Fontana, they believe that Philadelphia is a good environment right now to start their career and that the results will soon improve.

“In Philadelphia, they've been saying it a lot to the youth that their main goal is to have a starting XI of all homegrown players from the Philadelphia area,” Real said. “We knew it was in their best interest to play the youth. Honestly, no one really knew if that was going to be the case until it happened this year.”

Real and Fontan, both 18, have been close friends since a very young age and both joined the Philadelphia Union academy when it started and have progressed together to both the Union’s first team and the U.S. U-20 team. Fontana’s last U-20 call-up was in January but Real recently participated in the March camp (including a 1-0 win over an older French team) but was recalled early by the Union.

But Fontana and Real also reflect a current mindset of modern American players to turn professional at a younger age. New York Red Bulls winger Ben Mines, 17, scored in his professional debut last month and talked openly how about how he turned down a prestigious scholarship from Stanford University just to sign with the Red Bulls and begin play with Red Bulls II in the USL.

The choice to forgo top colleges was similar for both Fontana and Real but they insisted it was an easy decision – even if first team minutes in MLS were not guaranteed and that both would have to prove themselves in the USL first.

Last year, Real did just that where he stood out at left back for the Union’s USL team, the Bethlehem Steel. His father was born in Brazil and played academy level football where he was once coached by the legendary Garrincha. The love for soccer was instilled at a very young age for the native of nearby Drexel Hill and the opportunity to play pro was simply one he could not turn down.

“Wake Forest was a number one option for me for college,” Real said. “But no disrespect to the college but I felt for me it would be best if I went pro first because I know college is always an option for me - maybe not Wake Forest but college will always be there. I just felt that for me that my development would come faster if I went pro. There is a three month season in college. You don't get the full year-round playing time you would get as a pro. I also trusted to the system the Union had. My contract was for the Bethlehem Steel. It wasn't a first-team contract so that was a big risk I was taking but I trusted myself. To be honest, there really wasn't much selling that had to be done.”

For Fontana, it was similar situation. Growing up in an Italian household in the Philadelphia area (and he himself has been approved for an Italian passport) he was a fan of the Union from an early age and his family held season tickets going back to the team’s inaugural season in 2010. Through the Philadelphia academy he blossomed as a No. 8 central midfielder. This year, however, he has also seen minutes as the team’s No. 10 and scored the team’s first goal of the 2018 season in a win over New England.

"It's been my dream ever since I was six years old to be a professional player,” Fontana said. “I had a lot of offers from college, but I knew that if I got an offer from a pro team - especially my hometown team which I have been with since day one - once I got that offer there was no looking back. When I am on the field, I can look at the crowd and realize I was there just a few years ago. Everyone here is so committed to this project. I know there are upcoming kids that have this problem, but for me, if it's your dream you shouldn't think twice.”

To help with their adjustment, the environment within the Union has encouraged veterans to work with younger players as they integrate into the first team. In Philadelphia’s preseason, Fontana roomed with the veteran Alejandro Bedoya who mentored him both on and off the field.

Real, on the other hand, has bonded with Fabinho – the left back whose injury helped pave the way for Real to earn playing time. Last weekend before the game against San Jose, the injured Fabinho worked extensively with Real to prepare for the game. Then at halftime, the Brazilian met with Real again to go over adjustments.

The rest of 2018 will be challenging for Fontana and Real as they both try to be part of what they hope will be a youth movement at the Union which results in on-field success for an organization that desperately needs some and is still without a playoff win in its history.

“It's gone real well,” Real said. “It definitely is a big jump from the USL. There was a little more space and a little more time on the ball. The jump to the MLS definitely showed a faster pace of the game, better quality, and the players are more clinical. If there is a space to finish, they'll finish. If there's one wrong step on defense, the opposing team will create an opportunity. So there are definitely some adjustments I am making. But I am learning every day.”