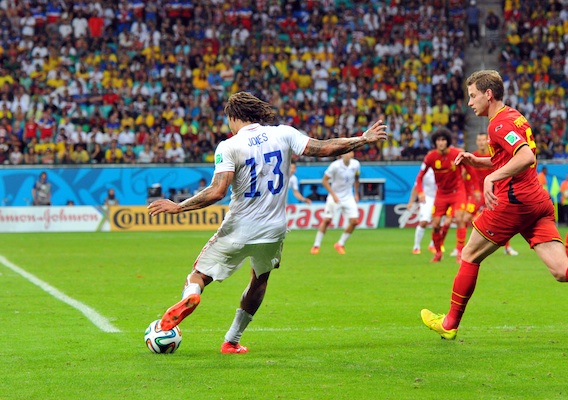 Ranking the Rankers: A Critique of the ASN 100

Jermaine Jones is the second-best American soccer player? Julian Green is 26th? Michael Bradley fell all the way to No. 5? We asked Blake Thomsen to poke holes in the latest ASN, and he did just that.
BY Blake Thomsen Posted
July 15, 2014
10:30 AM
IN CASE YOU MISSED IT, the new ASN 100 posted yesterday. For the uninitiated, that’s ASN’s ranking of the top 100 U.S. players based on current performance. It comes out once every two months, and each edition sees significant changes. I am not a contributor to the ASN 100 compilation—nine journalists with more experience than myself are on the panel. As a result, I don’t understand the challenges that go into trying to rank America’s best 100 players. Therefore, it would be awfully judgmental and a bit irresponsible of me to sit back—unaware of the difficulties that ASN 100 panelists face—and critique the new ASN 100. But that’s exactly what I’m going to do, because 1) the editor asked me to and 2) it sounds like fun. And I encourage you to join the conversation in the comments section below. Let's get started.

Tim Howard—ASN ranking: 1
I’ve been critical of Howard in the past, especially after his dodgy 2012-13 campaign for Everton. But Howard’s past year has been a tour de force of goalkeeping, and the master class against Belgium was a fitting end to a truly dominant year for club and country.
Verdict: Nailed it Jermaine Jones (2) and Michael Bradley (5)
This feels more than a little reactionary to me. Entering World Cup preparation, Jones was coming off perhaps his worst-ever club season, while Bradley was his typically excellent self for Roma and then Toronto FC. Suffice it to say there’s a reason Bradley was No. 1 and Jones No. 12 in the pre-World Cup ASN 100.

With that said, I’m not by any means going to claim Bradley had a better World Cup than Jones. But consider the facts: Jones was deployed in his dream position. With Kyle Beckerman and later Geoff Cameron offering protection behind him, Jones was freed to roam as he pleased. This allowed him to showcase his plus athleticism without any of the risks of the positional indiscipline that has long haunted his game. And I’d be remiss to not mention the wonder goal of an equalizer against Portugal. But considering that was only his third international goal, it’s safe to call that a (wonderful) fluke more than a true reflection on his skillset. On the other hand, Bradley was shoehorned into an uncomfortable role that took away from his strengths and magnified his weaknesses. Still, Bradley did a fine job in Brazil and covered an absurd amount of ground when helping the U.S.’s defensive efforts. I think anyone who says Bradley had a genuinely “bad” World Cup is disregarding his incredible work rate defensively as well as his offensive contributions, which were larger than people give him credit for. We can’t celebrate Jones’ goal but also blindly disregard Bradley’s sublime assist to Julian Green. It’s also worth noting that Bradley’s assist—which, impressively, we’ve seen similar things before—was far more representative of his skillset than Jones’ (admittedly fantastic) goal—which seems more of a flukish effort, even if he has managed the occasional great goal for Schalke.
Verdict: Cooler heads must prevail—flip their rankings, please Fabian Johnson(3), Clint Dempsey (4), Matt Besler (6)
This trio represents three of the U.S.’s very best players not only in Brazil, but also over the past 18 months. ASN 100 panelists: well done. This is precisely where these guys need to be. And credit especially for jumping Johnson over Dempsey, despite the latter’s two goals (and good overall display) in Brazil. Johnson was magnificent in Brazil, one of the best players of the entire tournament until his hamstring injury. A standout showing in South America for Johnson seemed an appropriate conclusion of a World Cup cycle in which he was the most consistent U.S. player not named Michael Bradley.
Verdict: Perfection [Editor's note: Tim Howard ran away with the top spot, but just two votes separated second place from fifth. It won't take much for Bradley to move back up, or for Jones to slide back down. ] Jozy Altidore (7) Kyle Beckerman (8), Geoff Cameron (9), Brad Guzan (10)
This feels nearly perfect to me. We can’t dock Altidore too much for his faulty hamstring, and after seeing how much he was missed after his injury, slotting him in at No. 7 seems about right. Guzan at No. 10 is also a strong choice. The guy can flat-out play, and we’ll probably see a lot more of him over the next four years.

If I’m being picky, I’d probably flip Beckerman and Cameron. Beckerman has some of the Jones-effect in the sense that he too was deployed in his optimal position, and duly shined as a result. Cameron, on the other hand, bounced around the field and never locked down a position. For what it’s worth, I think that his strongest position is the only one he didn’t play: right back. Cameron excelled there all season for Stoke and would have likely had a stronger World Cup had he played right back in Brazil. Also, as crippling as it was, Cameron’s failed clearance against Portugal seems to have negatively affected him in the rankings more than it should. Great players make mistakes, and—especially when they’re isolated incidents—that shouldn’t punish them too much in the rankings.
Verdict: Close, but not quite Landon Donovan—ASN ranking: 11
There’s nothing that a certain sector of ASN readers enjoys more than demanding that this site, and everyone else, shut up about Landon Donovan. Sorry, that’s just not going to happen, especially after that jarringly impotent attacking performance against Germany and Belgium. Before you bring up the quality of those teams, remember that Algeria (!) displayed a far more dangerous attack against both squads.

Anyway, I think slotting Donovan in here is just about right, with apologies to Aron Johannsson, who may have been pushing Top 5 status had he been fully healthy in Brazil. When we’re considering Donovan’s direct competition, I don’t think anyone can rationally place Graham Zusi or Alejandro Bedoya above Donovan. As much I love both of those guys, the World Cup showcased they both have offensive limitations that Donovan simply does not share, even if he’s not as fit or fast as he used to be.
Verdict: Well done panelists, this was your toughest call yet

DeAndre Yedlin—ASN ranking, No. 18 I like this one. Let’s keep the hype machine on a “low” setting until he’s done it a little more consistently for club and country, as the ASN 100 panelists did. Yedlin’s ranking will be as fun as any to track in the next year—don’t rule out a Top 5 ranking as early as next spring. But he’s not there yet. Hats off to the panelists for recognizing that.
Verdict: Nailed it Julian Green—ASN ranking No. 26 In contrast to Yedlin, I think the hype machine got a little overactive here. I love Julian Green. I think he’s going to be a star for a very long time. But he was very poor in his first two U.S. appearances, and we can’t forget that completely despite his sublime goal against Belgium. Like Yedlin, Green has the potential to skyrocket in these ranking sooner rather than later. But I’m not sure he’s the 26th-best player in America, right now.
Verdict: Maybe five to 10 places too high Tim Ream—ASN ranking, 27 Need evidence that your ASN 100 panelists are top-notch? Look no further. Full credit to them for recognizing how high of a level that Ream is playing at, regardless of his inability to get a national team call-up. This is strong punditry from the ASN team.
Verdict: Just right Brad Davis—ASN ranking, 30 I must say, with all due respect to Davis, who is and always has been a fine player, that this is a little too high. His inconsequential showing against Germany—like many of his past U.S. appearances—seemed to highlight that his game doesn’t translate that well to the international level. He’s a star in MLS, but that alone isn’t enough to give him a top 30 place.
Verdict: A touch too high Brek Shea—ASN ranking, 65 At first glance, this seemed too low for a player of Shea’s talent. But with longer consideration, I realized this was spot on. Talent doesn’t mean much if it doesn’t translate into consistent performances, and that’s been the story of Shea’s career since his breakout 2011 season for FC Dallas. Shea has the chance to rise—he’s still just 24—but for now, this is exactly where he needs to be.
Verdict: Spot on Carlos Bocanegra—ASN ranking, 67
I think Captain America’s reputation is keeping him here more than his play at this point. He deserves credit for playing well for Chivas USA this year, but I think there are better center back options in his immediate vicinity. The two names I’m thinking of? Seattle’s Chad Marshall (#70) and Real Salt Lake’s Nat Borchers (#75). Both of those guys are younger, and—as far as I’m concerned—better than Bocanegra at the moment.
Verdict: Not egregiously wrong, but not quite accurate

Rubio Rubin (98), Copy Cropper (99), Emerson Hyndman (100)
I love what the panelists did here. Are these guys all top-100 players in America? It’s impossible to say. But at this stage in the rankings, why not give some love to three of the U.S.’s brightest young talents. Teenagers Hyndman and Rubin look like they have a real chance of contributing to the first teams of Fulham and Utrecht, respectively, which would be huge achievements for both. Cropper is unlikely to see much first-team action at Southampton, the eighth best team in the Premier League a season ago, but his development seems to be going rather nicely regardless.
Verdict: Excellent way to close this edition of the ASN 100 All right ASN readers, this is just one man’s opinion. We trust that each of you has an equally valid but different opinion about all of these rankings. Let’s hear them in the comments section below. At the end of this week one randomly selected Blake Thomsen follower will receive a free ASN T-Shirt, so go to Twitter and make it happen.