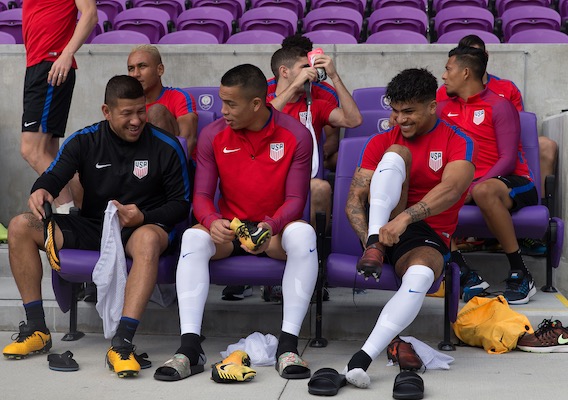 Who starts in goal? Where does Christian Pulisic line up? Which two forwards get the nod, or do you go with one? Bruce Arena has tough decisions to make ahead of Friday's must-win World Cup qualifier.
BY Brian Sciaretta Posted
October 05, 2017
6:00 AM

IN A PERFECT WORLD, the United States men's national team would be using these final two World Cup qualifiers to make some fine-tuning adjustments here and there. As one of CONCACAF's regional powers, qualification should have been secured by now, and the only drama before these two contests would involve which youngsters deserved a chance to blood themselves in the Hexagonal.

Bruce Arena should be able to send out a familiar-looking team with an established style of play—and the Yanks should dominate in a game that really doesn't matter.

But it's not a perfect world. Not only is the U.S. in a situation where it has to win its remaining qualifiers to ensure that it will participate in next year’s World Cup, management must also address some worrisome questions regarding how the team will lineup on Friday against Panama.

In fact, there are questions all over the field: goalkeeping, defense, midfield, and forward—and Arena has big decisions to make in terms of the formation, too. Here's a look at some of the biggest issues facing the squad.

Will Arena go with a five-man backline?

Arena has tried the five-man backline once when the U.S. team traveled to Estadio Azteca in Mexico City. Coming after a home win against Trinidad & Tobago and recognizing the team's underdog status, it was worth a risk. While the experiment failed last November when Jurgen Klinsmann tried it against Mexico, it proved successful for Arena and led to a 1-1 draw.

Looking at the current roster, Arena certainly has the players to pull it off. Geoff Cameron and Tim Ream are mobile central defenders and Omar Gonzalez can win aerial duals. Plus he has fullbacks in DeAndre Yedlin and Jorge Villafana who like to press forward. In a five-man backline, both fullbacks would have that freedom.

It’s one thing to try it in Azteca where both expectations and the likelihood of results are low. But it is another thing to try to pull it off in the biggest game of the year with a World Cup berth on the line. So while it’s possible to go with a five-man backline, it seems unlikely. Most of his team is more comfortable in a four-man backline and that's probably what Arena will deploy.

Who will partner with Geoff Cameron in central defense?

If Arena opts for a four-man backline, the starting backline is pretty clear. Yedlin will be at right back and Villafana will most likely get the nod on the left. And Cameron should return to the right side of central defense.

But who will partner with Cameron at left central defense with John Brooks still out with a long-term injury? While Arena could go with another right-footer in Gonzalez, that would be a departure from what Arena has been doing in having both a right-footed and left-footed centerback pairing.

If dominant foot pairing is the priority, Arena has two options: Ream and Matt Besler. Earlier in the year it seemed as if Ream had the edge on Besler and Ream fit well into the five-man backline in Azteca. But Ream got the nod last month against Costa Rica and underperformed. Besler had a much better game against Guatemala and Besler was also the starter this summer at the Gold Cup.

It remains to be seen if Besler has leapfrogged Ream in the eyes of Arena but Besler has far more experience and success with the U.S. national team with two Gold Cup wins and a starting role at the 2014 World Cup.

All of this, however, is contingent on Besler’s health. After taking a nasty shot to the head in a September 24 match against the LA Galaxy that left him a bloody mess, Besler was out of action for Sporting Kansas City this past Sunday.

A three, a four, or a five-man midfield formation?

When asked about why he selected Benny Feilhaber to this roster, Arena offered an insight about what this team has been missing: “He's a good passer,” Arena said. “In the final third of the field he has some qualities that I think we're lacking.”

This could mean that Christian Pulisic moves centrally into a No. 10 role or he keeps Pulisic on the wing and starts Feilhaber in the middle in a No. 10 role. But it points to the use of a No. 10 in either a 4-3-3 or a 4-2-3-1 diamond. It also suggests that a 4-4-2 with two central midfielders in box-to-box roles like a Michael Bradley-Kellyn Acosta/Darlington Nagbe pairing is less likely.

Where does Pulisic play?

This is one of the most important questions on the national team right now. If Pulisic is the team’s best player, how does Arena get the most out of him?

Yes, Pulisic plays on the wing frequently for Borussia Dortmund but his best position is still probably as the No. 10. At his club he is forced out wide because of world class players that play more centrally. But for the U.S. the No. 10 role gives him more touches and gets him more involved. On the wing he is too vulnerable to being neutralized. Costa Rica was mostly effective in doing this.

No matter his position, Arena gives Pulisic a lot of freedom but will he put him in the No. 10 role or put him mostly out wide and try to emulate his role at Dortmund?

Who partners with Bradley in central midfield?

This has been an issue for the U.S. team for some time. For years it was Bradley and Jermaine Jones in central midfield but Arena has moved on.

Bradley does not necessarily need a partner either. In a 4-1-3-2, for example, Bradley could serve a sole defensive midfielder. That, however, could make the backline vulnerable. It is the same in a diamond midfield (although that is a stronger possibility given the attacking nature of the fullbacks Arena has this round).

There are various formations, however, that give Bradley a partner with a No. 10 sitting in front of them and that probably seems most likely right now. On the roster, Bradley could partner with either Nagbe, Acosta, Alejandro Bedoya, or Dax McCarty. Of these players, Acosta seems like the best fit given his ability to push forward as well as defend. The problem is that the FC Dallas youngster is not arriving in camp in good form right now. Bedoya and Nagbe are two players who can play both box-to-box roles or on the wing. Nagbe is better on the ball but Bedoya brings much better defense.

One forward or two?

While there are more forwards on the 26-man roster, only Jozy Altidore, Bobby Wood, and Clint Dempsey are likely to play meaningful minutes.

During the Gold Cup and into September it seemed as if Wood and Altidore would be the top pairing, with Dempsey coming off the bench in a super-sub role. That still very well might be the case. But the Wood-Altidore pairing looks better on paper than it has actually performed. The two solutions are to drop one for Dempsey or move to a one center-forward formation (a 4-3-3 or a 4-2-3-1) with either of the three taking the job.

Wood would seem to have an advantage in a one-forward setup since that is how he plays at Hamburg but concerns over his knee continue to linger and Arena might still have faith in Altidore’s ability to get the job done like he did at the Gold Cup.

Is Dempsey still a super sub?

The team’s all-time best forward is clearly on the tail-end of his career and Arena has shown a willingness to use Dempsey off the bench. Against Honduras last month, however, Arena gave Dempsey the start. It's a huge decision and Arena will need to get it right.

Who starts—Tim Howard or Brad Guzan?

Arena said he will announce his starting goalkeeper on Thursday. While Howard let in a bad goal against Costa Rica, it would seem like he has earned the right to start in the biggest games. But the questions will be can he start both at a time when there is everything to play for? It is going to come down to training this week and Arena’s gut feeling on the matter.