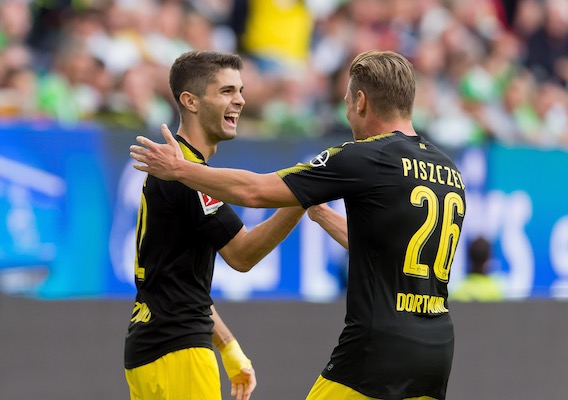 CHRISTIAN PULISIC'S DOMINANT performance highlighted the weekend for Americans abroad, and the Pennsylvania native re-established himself as one of the top teenagers in the game right now. The best news, however, is that Pulisic was not the only American putting in a good shift. Here's a rundown of the key weekend activity.

Pulisic scores in win over Wolfsburg

Pulisic won’t turn 19 until next month but he has the poise of a veteran in his prime. While he showcased his talent in 2016-17, the U.S. international seems primed to take his game to another level this season.

In Borussia Dortmund's season opener at Wolfsburg, Pulisic scored in the 22nd minute with a lovely right-footed shot.

As nice as that was, it wasn’t Pulisic’s best play in the game. That would come in the 60th minute when he assisted on Pierre-Emerick Aubameyang’s goal with an incredible pass from the right wing.

Pulisic was the best player on the field in Dortmund's convincing 3-0 win. Wolfsburg is trying to rebuild itself from a terrible season and is already without injured American central defender John Brooks for three months to start the season.

On Saturday, American teenager Weston McKennie subbed into Schalke’s Bundesliga opener in the 79th minute with his team up 2-0 over RB Leipzig. The central midfielder from Texas was active in helping his team close the game out. Defensively he helped force turnovers and won challenges. He was cleaver on the ball and at one point successfully took on several Leipzig defenders before springing a nice counterattack.

McKennie is a major prospect for the United States and could be a huge part of the national team’s future. If he wants to make a run at the 2018 World Cup roster, he’ll have to continue to play well and earn some starts. If he can push toward 1,500 minutes, that would be quite a statement.

After going on loan from Schalke to Sandhausen of the 2.Bundesliga, Haji Wright did not disappoint in his professional debut.

Wright, 19, started the game on the bench but came on in the second half and scored the third goal in Sandhausen’s 4-0 rout over Dynamo Dresden. Fellow American attacker Andrew Wooten was injured for the game.

This is a very promising start to a loan spell for the Californian who should speed up his development while earning regular professional minutes.

No one in the 2.Bundesliga is off to a better start than German-born American forward Jann George.

George, 25, was a top youth player for Nurnberg years ago but has largely underachieved in his career, playing mostly for reserve teams as he has bounced around from club to club. His sole international involvement came in a United States U-23 call-up in 2011.

Now with newly promoted club Jahn Regensburg, George is having the best few weeks of his career. On July 29, he scored in Jahn Regensburg’s season opener. On Saturday, he scored two goals in a 4-2 win over woeful Ingolstadt (where fellow American Alfredo Morales failed to get off the bench).

George now has three goals in three games to start the 2.Bundesliga season.

The English Premier League is only two weeks old and one of the more surprising results came on Saturday when Stoke City defeated Arsenal 1-0. For American fans it was especially encouraging to watch Geoff Cameron go the distance in the win.

The Massachusetts native looked sharp playing in a three-man backline. He completed 89% of his passes and won a high percentage of his aerial challenges.

With several uncertainties along the backline right now for the U.S. national team, Cameron is playing like the consistent force that Bruce Arena needs him to be.

Horvath and Brugge into first

It’s been a good start to the season for Club Brugge in Belgium which has won all four of its games. Colorado native Ethan Horvath has started each of the games so far and on Sunday he enkjoyed his best game as Brugge defeated Kortrijk on the road 2-1.

Kortrijk outplayed Brugge, holding 57% possession and getting eight shots on frame. Horvath finished with seven saves. The race for the U.S. national team's third goalkeeping spot is wide open and Horvath is stepping up.

Julian Green did not travel for Stuttgart’s Bundesliga opener on Saturday—which was not surprising as local media reported that the American winger is now for sale.

When Green made the move to Stuttgart last winter many hoped that the Tampa native would finally find suitable home. He played initially in the spring while the club was in the 2.Bundesliga but fell out of favor toward the end of the season.

With less than two weeks remaining in the transfer window, Green’s name should surface in a move. A change of scenery is needed and perhaps he will explore options outside of Germany.

After helping NAC Breda win promotion to the Eredivisie, Shane O’Neill’s career once again returned to limbo. Breda wanted the Irish-born American back but his contract situation is confusing since it is actually owned by Appollon, a Cypriot club for which he has never played. Since leaving the Colorado Rapids, O’Neill’s career has consisted of a series of loans.

O'Neill finally found a home as the Eredivisie side Excelsior announced it has signed the former U.S youth international on a permanent deal.

There he will join fellow American defender Desevio Payne—the pair were teammates on the U.S U-23 team last year.