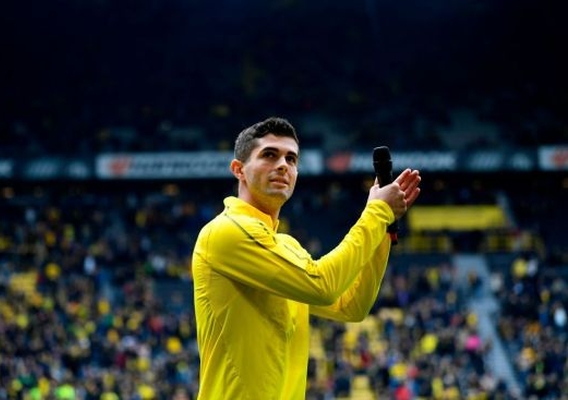 It was a busy weekend for Americans abroad as many were fighting for promotion or championships. ASN's Brian Sciaretta walks you through the top stories in detail.
BY Brian Sciaretta Posted
May 13, 2019
1:00 AM
THE SEASON IS either over or nearing its completion for many of the Americans based abroad. This past weekend, however, was mostly about those pushing for either promotion or championships. For that it was an exciting weekend.

Indeed, the 2018/19 season is ending with a bang and here are the top stories for Americans abroad from the past three days.


In his final home game for Borussia Dortmund, Christian Pulisic scored in the 41st minute to give Dortmund a 1-0 lead over Fortuna Dusseldorf. In the end, Dortmund would win 3-2.

It was a huge win for Dortmund which kept its faint title hopes alive heading into the final weekend of the Bundesliga season. It now trails Bayern Munich by two points. With Bayern Munich holding a huge edge in the goal differential tiebreaker, Dortmund will have beat Borussia Monchengladbach next weekend while also hoping Bayern Munich lose at home to Eintrach Frankfurt – which will be motivated to win as it still has the potential to qualify for the Europa League or even the Champions League with a win.

As for Pulisic, he is playing fantastic soccer to conclude a mixed year where he made only eight Bundesliga starts due to either a coaches choice or injuries.

But Pulisic addressed the crowd before the game and it was clear this is an emotional time as he will head to Chelsea next year.

Tyler Boyd steps into the spotlight

But right now, it seems like an obvious decision for U.S. Soccer to approach Boyd and see if he is interested in switching. In an interview with ASN in December, Boyd said it would be an honor to play for either national team.

The speedy winger is on absolute fire right now on loan from Vitoria de Guimaraes to Ankaragucu of Turkey’s top flight, the Super Lig.

In his 14 games with the Turkish club, he has five goals and 4 assists. Many of them have been impressive fashion but his goal on Saturday in a 2-1 loss to Istanbul Basaksehir was perhaps the best of the bunch. While he is right-footed, he made devastating cut inward to completely blow past his defender and fire an unstoppable shot with his left foot.


Pretty insane goal from New Zealander-American Tyler Boyd in Turkey today to give Ankaragucu a 1-0 lead on Istanbul Basaksehir in the first half. He now has 5 goals & 4 assists in his 14th game with the club since joining on loan pic.twitter.com/zLQK0jdkr3

Will Berhalter approach Boyd? That is up to the new national team manager and its general manager Earnie Stewart. But at this point, he seems like he could have the potential to be a massive addition to the team to bolster its attack on the wings.

Holmes and Derby in tough shape


The promotional playoffs got underway throughout the lower leagues in England and in the Championship, Derby County hosted the favored Leeds United on Saturday. American Duane Holmes earned the start at the No. 10 position for Derby. Earning the start for Leeds United was former New York City FC winger Jack Harrison.

Holmes was decent but Leeds was the better team and came away with a 1-0 win. Holmes was only in his second game back from a month-long layoff due to injury and was asked to cover a lot of ground and defend. While Derby had its chances, Kemar Roofe scored the winner in the 55th minute on an assist from Harrison.

Derby is certainly not out of it but having to win in Elland Road on Thursday is a tough task.


The first leg of the promotional playoffs went much better for Lynden Gooch and Sunderland which defeated Portsmouth 1-0 at home. Now they will head to Portsmouth on Thursday with the lead.

Gooch, 23, played 70 minutes but came out soon after Sunderland were reduced to 10 players. Overall he did well and should be back in the starting lineup Thursday. Should Sunderland prepare, it will most likely face Charlton Athletic which came away with a huge 2-1 win on the road over Doncaster in its first leg.

For Gooch, a return to the Championship would be huge for him. Not only would he help the club he’s been affiliated with for well over a decade, but a move to the second tier would give him a better spotlight to make a return to the United States national team.


Dilly Duka, 29, will be playing in the UEFA Champions League qualifiers this summer after winning the Albanian title with FK Partizani. Since joining the team in January, the New Jersey native has been a regular starter – mostly as the team’s No. 10.

Partizani has held a double-digit lead atop the table for most of the past two months but it was able to clinch the title on Sunday with a 2-1 win over KF Tirana in a bitter derby match. A veteran of the 2009 U.S. U-20 World Cup team, Duka’s parents are from Albania and this move offered him a chance to return to the country.

Very impressive were the scenes at the stadium after the final whistle and the euphoric reaction among the Partizani supporters.


Congratulations to New Jersey’s own Dilly Duka who started today for FK Partizani in a 2-1 win over rivals KF Tirana. With the win, Partizani clinched the Albanian title and a spot in the UEFA Champions League qualifiers. Their supporters went wild pic.twitter.com/Xxm5i65PoO

In Belgium, the top two teams of the First Division met as U.S. national team goalkeeper Ethan Horvath and Club Brugge hosted leaders Genk on Sunday. Entering into the day, Genk held a six point lead atop the standings. But Horvath and Club Brugge walked away with a big 3-2 win to narrow the gap to just three points with just two games remaining.

With both teams having games midweek, the Belgian title will be wrapped up on Sunday. The winner of the league will qualify directly to the group stages of the UEFA Champions League. The runner-up will participate in the qualifying stages of the Champions League. Brugge can finish no worse than second place so Horvath and company will return to the elite competition next year – even if just the qualifying rounds.


Next season’s Champions League will be include a major milestone for American soccer as Jesse Marsch will become the first American manager to coach in the group stages of the prestigious tournament. Due to the finishes in England, it was guaranteed that the Austrian winner, Red Bull Salzburg, would qualify directly for the group stages.

Marsch left the New York Red Bulls last summer to take an assistant job at RB Leipzig. Last month he was named as the next manager of Red Bull Salzburg after its manager, Marco Rose, agreed to take the job at Borussia Monchengladbach next season.

Marsch has proven to be a remarkably successful coach and will now be the first American to coach at this stage of the Champions League.

Miami-born midfielder Matko Milijevic, 17, earned his first professional start for Argentinos Juniors in the Copa de la Superliga on Sunday. The American played the first half of a 0-0 draw vs Gimnasia in what were the first meaningful minutes of his career (he made a stoppage time sub appearance in the last round and went as an unused sub twice in the Superliga).

Milijevic has played for both the youth national teams of the United States and Argentina with a U-20 appearance for Argentina coming more recently at the start of the 2018/19 season. He recently told American journalist Arch Bell that he hopes to receive another U.S call-up soon. The most likely opportunity for him would probably be at the start of the 2021 U-20 cycle – whenever that team begins.


Hobro is in a desperate relegation fight in Denmark after it lost a 0-1 decision at home on Sunday to Vejle and will now have to win on the away leg to stay up. In the loss, Hobro was arguably the better team according to local media reports although it could not finish its chances.

American Christian Cappis was named the MOTM in the game. It was a bittersweet moment for the Texan who was one of the toughest cuts from the U.S. U-20 World Cup team on Friday. The look of him accepting the MOTM trophy was apparent and he will need to be very sharp again on Sunday to help his club avoid relegation.