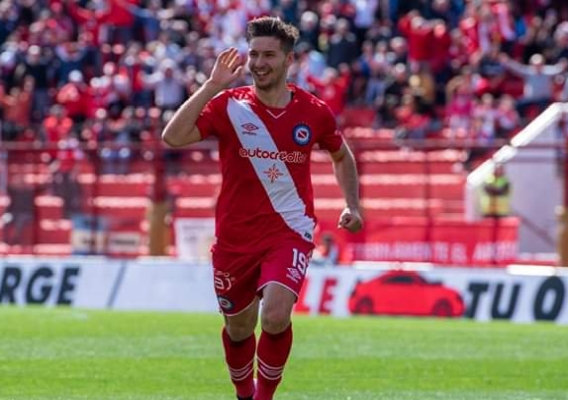 Yes, Christian Pulisic deserves all the attention, but here were a lot of Americans who were part of winning performances. Alfredo Morales and Antonee Robinson are USMNT bubble battlers who also stood out. Meanwhile, an American teenager started for Argentina's leaders.
BY Brian Sciaretta Posted
November 03, 2019
4:00 AM
THE WEEKEND for Americans abroad was good one despite a limited number of goals or assists. The most revealing aspect of the weekend’s games is that many American were part of positive results and important wins for their clubs.

Goals and assists won’t always come, but if players are part of wins, then managers likely won’t change lineups.

There also wasn't too much to report from two of the most popular American players as Sergino Dest was rested by Ajax and Josh Sargent only saw limited mintutes off the bench in Werder's disappointing fifth straight draw.

Of course, some players had the experience of winning and getting on the scoresheet.


One week after his statement performance where he notched a hat trick against Burnley, Pulisic backed it up with a goal in a 2-1 performance against Wigan.

The Hershey native is living up to massive expectations that come with being on one of the biggest clubs in the world. That makes this current run historical by American soccer standards. You almost can’t wait to see what he will do next.


The list is long of Americans that weren’t on the scoresheet but who were part of big wins this past weekend.

The biggest win of this bunch went to DeAndre Yedlin who went a full 90 for Newcastle which came up with a big 3-2 away win over West Ham. Yedlin was quiet but was still part of a big three point effort that moved the club to within striking distance of midtable.

Matt Maizga and Reading were drifting close to the relegation zone of the Championship but are now safer after a 2-1 win over Millwall at home.

Staying in the Championship, Duane Holmes and Derby County came up with a nice 2-0 win over Middlesbrough – which was reduced to 10 players in the 32nd minute. Holmes had three shots but none were on target. He also didn’t have a key pass and only had one successful dribble – so it was quiet by his standards. But being part of a big win is important.

Eric Lichaj is Hull City’s captain and had a very strong outing in a 3-0 win over Tim Ream and Fulham. It was Hull’s third win in a row to move it into 11th place in the league.

In Germany’s second tier, Julian Green went the distance for Greuther Furth which won 3-1 over Darmstadt to move into fifth place. Green remains likely in contention for a call-up and a return to the U.S. national team.


Fortuna Dusseldorf posted a 2-0 win over Koln on Sunday which will be helpful in its ultimate goal of avoiding relegation. After a loss to Paderborn last weekend, a victory was critical. Alfredo Morales was crucial in helping Fortuna earn the victory

Morales earned a penalty and was massive defensively. He was a big reason why his goalkeeper, Zack Steffen, only faced one shot on target.

In addition to winning five aerials, Morales also was credited with two tackles and two clearances.


It wasn’t a good result for Antonee Robinson and Wigan Athletic which fell to Swansea City 2-1 on a stoppage time goal which won it for the guests. But for the second straight week, Antonee Robinson was probably his team’s best player.

Robinson had two key passes, two successful dribbles, won two aerials, had five clearance, six interceptions, and one tackle. After making the Championship team of the Month for October for most publications, his outstanding form is carrying into November.

At this point, a U-23 call-up for November seems likely for Robinson.


Weston McKennie is a very versatile player. That is good in the sense he can help a team in many different ways but it hurts in that it sometimes prevents him from settling into a role where he can grow.

On Friday, it was more of an asset to Schalke as McKennie shifted to central defense after a ninth minute injury to Daniel Caligiuri. McKennie wasn’t perfect in that position but he was part of a 3-2 away win for Schalke which moved it into sixth place. It showed a lot of faith in McKennie to make that kind of switch during a game without much preparation.


Whoever is coaching the next U.S. U-20 team, a major priority should be to get Matko Miljevic involved. Tab Ramos tried to bring him into the September camp but Miljevic’s club, Argentinos Juniors, did not release him.

On Monday, Miljevic, 18, started and played 66 minutes for Argentinos Juniors in a 0-0 road draw against Defensa y Justicia. That point moved Argentinos Juniors atop Argentina’s Primera after 12 games. Miljevic has played in five of the 12 games but still at only has 250 minutes. Next up will be a road matchup against San Lorenzo.

Miljevic, a Miami native, is still taking his first steps as a first team player but having an American teenager playing for the Argentine leaders is no small feat.


Cameron Carter-Vickers has a tough assignment this season on loan at a very, very poor Stoke City team.

Typically, he’s been among his team’s best players – which isn’t saying much. But today, Carter-Vickers wasn’t good in a 2-0 loss to leading West Brom. Stoke, meanwhile, is still mired in last place in the Championship.

Carter-Vickers booked for fouling Diangana in the box.

Despite this, look for Carter-Vickers, 2-1, to possibly be involved in the upcoming U.S. U-23 camp. He is still one of the most experienced American players at that age group with nearly 7000 first team professional minutes.


Hobro isn’t having a good season in the Danish Superliga and is once again in a relegation fight. Last year it only avoided relegation thanks to the play of Emmanuel Sabbi down the stretch. This year it will need Sabbi to continue to help save them – unless the club is forced to sell him.

On Sunday, Hobro dropped a 2-1 decision to OB but its one goal was a terrific free kick from Sabbi who was a veteran of the 2017 U.S. U-20 World Cup team and who could be on the upcoming U-23 team as well.


Take a bow Emmanuel Sabbi. That’s a great free kick from the U.S U-23 winger to pull one back for Hobro (OB 2-1 Hobro HT) pic.twitter.com/JhmisG9XjN