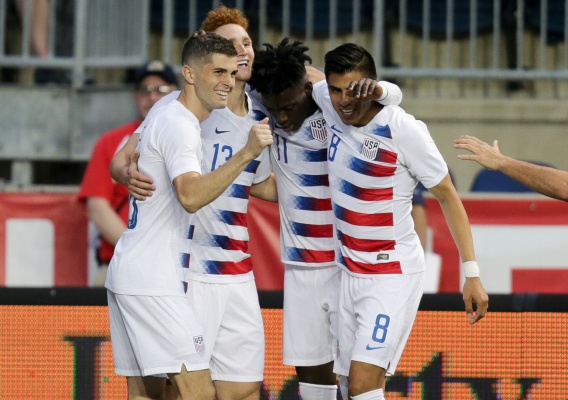 Dave Sarachan today announced a very strong U.S. national team roster that features most of the young core he has built along with exciting newcomers. Combined with the return of Bradley and Guzan, it is the most balanced team of his tenure.
BY Brian Sciaretta Posted
October 01, 2018
7:05 AM
UNITED STATES national team interim coach Dave Sarachan today announced his roster for the upcoming friendlies against Colombia and Peru. The roster is strong and the young core remains in-tact while even more newcomers are added. Meanwhile, veterans Michael Bradley and Brad Guzan return to the squad.

Here is the roster for the upcoming games.


Jonathan Amon, 19, is one of the team’s most exciting additions as the South Carolina native is regularly producing for FC Nordsjaelland in the Danish Superliga. Nearly every game the explosive winger is scoring goals or adding assist.


Amon making things happen today - as is the norm pic.twitter.com/auGYGvqYCj

Amon should add some attack up the wing which was needed last month as Kellyn Acosta did not look comfortable out of position on the flank.

“Jonathan is a player we have been following for a bit,” Sarachan said. “Obviously he is a starter for his club where he is getting full minutes, producing goals and contributing a lot of value in the attack. He has a dynamic presence, so he’s a guy I wanted to see up close and get to know. With the combination of his speed and ability to at defenders in the final third, he’s someone that has shown to have a certain skillset that we have been missing. He’s young, but I think it’s a good time to get to know him.”

Reggie Cannon, 20, has also been a very consistent player for FC Dallas and has emerged as the likely starter at right back for the U.S. U-23 team next year. While DeAndre Yedlin is the starting right back, Cannon has emerged to compete with Shaq Moore as the backup.

“Reggie is a young player that has grown tremendously to the point where he is a consistent starter for the top team in the Western Conference as a right back,” Sarachan said. “He possesses good athleticism and speed and has shown that he is hard to beat. He has consistently done that this season with FC Dallas, and so I thought this was a good opportunity to call him."

The addition of Amon and Cannon now points to the fact that the next U.S. U-23 team will have significant experience with the full national team. Tim Weah, Josh Sargent, Christian Pulisic, Cameron Carter-Vickers, Erik Palmer-Brown, Tyler Adams, Weston McKennie, Jonathan Amon, Reggie Cannon, and Antonee Robinson are all Olympic eligible and will all have played with the U.S. team this year.

In addition, Sarachan has also called up Ben Sweat for the first team to explore fullback depth.


Michael Bradley is making his first appearance with the national team since the debacle in Trinidad last year. It remains to be seen if he is still the captain.

While Bradley played very well for Toronto in the CONCACAF Champions League earlier in the year, it has been a tough year for everyone at the club with Toronto set to miss the playoffs despite being the defending champions.

The reason for bringing the duo back is to provide a blend of experience to go with the young core and Sarachan believes Bradley and Guzan could serve as a resource for the younger duo. In addition, it will also force the young players to compete.

“When you are building a team, at some point there has to be the proper blend of youth and experience,” Sarachan said. “As we head into these last four friendlies of the year, I felt the timing was right to begin that transition. I think it’s important to do it earlier than a week before the Gold Cup or a World Cup Qualifier. Bringing in players like Michael and Brad, who have a vast amount of experience and can be a great resource for our younger players – both on and off the field – is an important step for us at this point in time.”

“We’ve begun to develop a deeper pool across the board,” he added. “As we continue to offer opportunities, it will strengthen us even more. At the same time, players need to understand that there is going to be competition for spots and for playing time, and that is part of the next stage of development for many of these young guys. I think we’re going to see that competition more and more as we move forward.”

Saief and Pulisic to boost the attack


Of course with Amon, Josh Sargent, and Tim Weah, there is youth in the attack. But there are also players who will bring both youth and high level experience to the attack.

There are plenty of reasons why the U.S. national team attack will be improved this camp. Christian Pulisic is the team’s best player and he will bringing elite Champions League and Bundesliga experience to a roster. The Hershey native has the ability to play out wide or in the No. 10 thereby giving Sarachan the ability to have creators on the field.

When Pulisic is combined with Amon, Weah, Yedlin, Robinson, Cannon, and Adams, it is one of the strongest USMNT rosters in years.

Kenny Saief, 24, meanwhile, has been injured for long stretches over the past year but the American winger brings Champions League and Europa league experience from Belgium clubs. Last year he played for Gent but he is currently with Anderlecht. When healthy, he is one of the most technical and tactically savvy American attacking players.

Who is not here?


There are, of course, notable absences. None of the DC United players are here because that club has very important games over the international window. That prevents a potential first cap from Russell Canouse. It also likely prevented Paul Arriola and Bill Hamid from joining the team.

Not all of the players who were called up in recent camps are here. Central defenders Tim Parker and Walker Zimmerman and midfielder Marky Delgado are missing from domestic teams. From Europe, Erik Palmer-Brown is working to secure his place at NAC Breda as well.