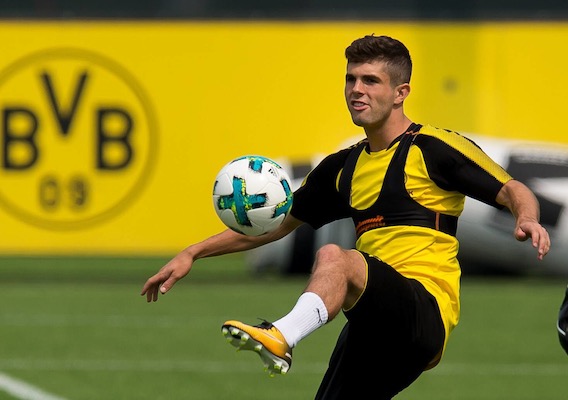 THIS PAST WEEK has seen a number of young Americans abroad making waves in preseason. In this, our third installment covering Americans abroad in the 2017 preseason, we pay attention to the significant progress some of the top youngsters are making in Europe and Mexico.

Weston McKennie, 18, has looked sharp so far this preseason for Schalke and has been given a lot of minutes from new manager Domenico Tedesco. Playing as a No. 8, the Dallas native has played well, displaying a nice range of passing, a smooth touch, and the ability to break the game open.

On Wednesday, McKennie notched a 41st-minute assist to Amine Harit for the opening goal of a 3-2 win over Besiktas. It was a well-timed throughball that was probably the best play of the first half.

If anyone is looking for an American youngster to have a breakout season in Europe, McKennie is a good one to follow.

Picking up where last season left off, Christian Pulisic looks like he is going to continue to be a big part of Borussia Dortmund's plans this season under new coach Peter Bosz.

On Tuesday, the Pennsylvania native had a hand in all three goals in Dortmund’s 3-1 win over AC Milan, drawing a penalty and registering two assists.

Very few Americans have managed to prosper within Liga MX youth programs and work their way up to the senior side.

Jonathan González looks ready to give it a try as he has been playing with Monterrey’s first team this preseason, and is now registered on the Liga MX site with the first team.

Fans of U.S youth teams will remember González, 18, from the CONCACAF’s U-20 World Cup qualifying tournament. While he did not make the U-20 World Cup team, he is young and also eligible for the 2019 U-20 World Cup team. A native of Santa Rosa, Calif., Gonzalez is a central midfielder although he can play a wide range of positions.

At the end of last season Emerson Hyndman left Rangers with three games remaining due to a stress fracture in his foot. He returned to his parent club, AFC Bournemouth, for rehab.

Now Hyndman is with Bournemouth and is nearing a return—although last week the Bournemouth Echo reported that the Texan is still not able to play due to the stress fracture.

This coming season is very important for Hyndman to build off his strong loan at Rangers. The fact he is still unable to play comes at a very bad time because he was also injured last year in preseason and has never really had an opportunity to make a case with the Premier League club.

The annual summer invasion of big European clubs is in full swing, as teams like Tottenham bounce around the U.S.

Here is our confirmed travelling squad for our trip to the USA… ?? ???????? #SpursInUSA pic.twitter.com/ijyDaZKL7G

U.S. fans will be thrilled to see 2017 U.S. U-20 World Cup central defender Cameron Carter-Vickers on the traveling squad. These games represent a big opportunity for the England native who was given the opportunity to play in a few cup matches last season but never saw the field in a Premier League game despite making the bench 16 times.

Toward the end of last season, Spurs’ boss Mauricio Pochettino said Carter-Vickers would play more for the first team—which would suggest that his Premier League debut is approaching. But how many minutes he sees are dependent on how well he shows in training and in preseason.

What American fans most likely do not know is that Carter-Vickers is not the only American on Tottenham’s preseason roster as goalkeeper Brandon Austin also made the cut. The U.S. Virgin Islands native recently played for the United States U-18 team at the Slovakia Cup.