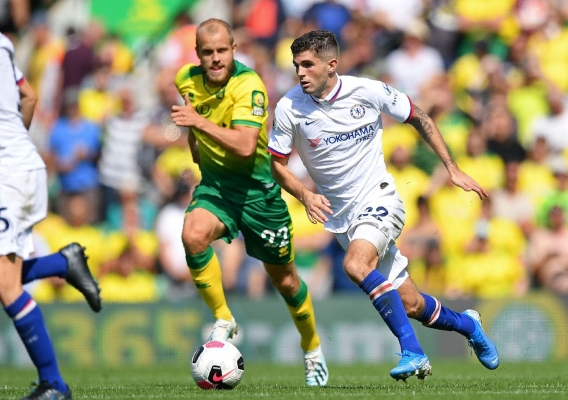 ke eery weekend during the season, there are always highlights for Americans abroad. This weekend there were a few highlights, but mostly low points. As he does every Monday, ASN's Brian Sciaretta is here to help you make sense of it all.
BY Brian Sciaretta Posted
August 26, 2019
8:00 AM
FOR AMERICANS abroad this season, Christian Pulisic will continue to get a ton of media attention after his high profile move to Chelsea. The Hershey native played very well on Saturday and drew a lot of praise for his performance – but the many headlines he earned shouldn’t distract from what was an overall very bad weekend for Americans abroad.

There was a large combination of players who either did not play well, played very little, or sometimes did not even get off the bench. Unfortunately, two of the brightest young American players in Timothy Weah and Sergino Dest were both off this weekend to help try to bring better news.


Coming into this weekend, we already knew there were top players like Tyler Adams and DeAndre Yedlin who would continue to miss time with injuries. But to make matters worse, Matt Miazga was pulled from Reading’s game on Saturday after less than 15 minutes of action due to what was reportedly a calf injury.

The biggest source of frustration for American fans was mostly in two parts.

First it was the inability of top young forwards to get off the bench. In the 2.Bundesliga, Sebastian Soto was an unused substitute for Hannover in a 1-1 home draw against Greuther Furth. That is a terrible result for a club like Hannover with promotional hopes.

Then in the Bundesliga, Josh Sargent did not get off the bench for Werder Bremen in a 3-2 loss on the road at Hoffenheim. Werder Bremen now has two losses to start the season.

For both Soto and Sargent, both players are clearly going to have to make the most of whatever opportunity they get – knowing that the leash will be short. Part of Sargent’s problem last year when his first team minutes declined is that, at the same time, he stopped getting reserve team minutes to stay sharp. It will be interesting to see if both Sargent and Soto can continue to get minutes with youth and reserve teams in the process. For Soto, it remains to be seen if the club isn’t playing him due to stalled contractual negotiations.

The other frustrating aspect of the weekend for American fans was in the Championship this weekend – which was a wipeout.

In England’s second tier, Matt Miazga was injured, Cameron Carter-Vickers made his first start for Stoke City but wasn’t great in a 3-0 loss at home to leave the club with just a single point through the season’s first five games, Antonee Robinson and Wigan lost to Queens Park Rangers 3-1 for its fourth defeat in a row, Tim Ream and Fulham lost at home to Nottingham Forest, and Eric Lichaj and Geoff Cameron were out injured.

What a bust in Championship.

The bad news wasn’t limited to these two areas either. Erik Palmer-Brown was given a straight red card in his debut for Austria Vienna. U.S. national team winger Tyler Boyd was invisible for Besiktas on Friday – but the club still won its home opener 3-0 against Goztepe. The New Zealand-born Boyd hasn’t had a great start at Besiktas just yet.


Erik Palmer-Brown has been sent off in the 76th minute with a straight red card. Austria Vienna still lead 2-1 https://t.co/3WPdtk8Uiz

In Argentina, Arsenal de Sarandi started the weekend as the only perfect team in the Primera with nine points from three rounds and American midfielder Joe Sonora has been very good for the club after scoring two goals in that span. But Sonora and the newly promoted Arsenal was overwhelmed at home in a 3-0 loss to San Lorenzo on Friday.

In a what was a faint pulse in an otherwise bleak situation in the 2.Bundesliga, Bobby Wood had a 10-minute, late-game cameo for Hamburg in a 4-2 win over Karlsruher. The fact that this is an improvement speaks volumes on a player who dominated this league a few years ago and is now in his prime.


After the first two games of the Premier League season, pressure has been growing on Chelsea following blowout 4-0 loss to Manchester United and a lethargic 1-1 home draw to Leicester City.

But a road trip to Norwich proved to be the ideal grounds for Chelsea to get its first win of the season. It wasn’t easy, but the Blues walked away with a 3-2 win and Christian Pulisic was a big reason why.

The Hershey native picked up a “hockey assist” on the team’s first goal with a clever ball down the right ride which opened up the overall play – which Tammy Abraham finished off for a 1-0 lead.

Minutes after Norwich equalized, Pulisic had a full assist on Mason Mount’s goal on an impressive pass in a tight space to spring Mount past the defense.


Here is your Pulassist that puts Chelsea back on top 2-1 #USMNT pic.twitter.com/y2xHIpba3U

Overall, Pulisic played 84 minutes and it was his best outing yet. I clearly was a positive statement that he should remain in the starting lineup.

Brooks has a happy Berlin homecoming


John Brooks, 26, developed at Hertha Berlin and he helped the club to promotion to the Bundesliga and kept it there before his 2017 transfer to Wolfsburg.

On Sunday, Brooks returned to his hometown to take on Hertha and helped Wolfsburg walk away with a convincing 3-0 road win. Brooks was very solid in the outing where he was credited with a team-high four tackles along with an interception, a clearance, and a 70% pass completion percentage.

After a 2-1 win over Koln last weekend, Wolfsburg is one of five Bundesliga teams with six points through two rounds.


As I posted yesterday, Red Bull Salzburg is just on another level completely under Jesse Marsch. I know having a +19 (22 scored, 3 conceded) is ridiculous after just 5 rounds. But I didn't realize this fact below. https://t.co/P9Qr3ukFov

Next month, Marsch will become the first American manager to lead a team in the group stages of the Champions League.


The Bundesliga is always a busy place for Americans these days and this weekend was no exception.

Weston McKennie and Schalke lost at home to Bayern Munich by a convincing 3-0 scoreline. It was a mixed performance from the Texan who completed a high number of his passes – including a pair of impressive passes in the first half – but didn’t see enough of the ball. McKennie was far from Schalke’s problems on a day where it was simply overwhelmed by the champs. McKennie was his scrappy normall-self defensively, but for him it will be about getting the ball more.

Fortuna Dusseldorf dropped a 3-1 decision at home to Bayer Leverkusen. Zack Steffen wasn’t at fault for the three goals as Leverkusen was simply the better team. Former U.S. international Alfredo Morales was the team’s best player in the loss as he scored the only goal – late in the game to finish off the scoring.

Timothy Chandler rarely plays for Eintracht Frankfurt these days but could change that after nabbing an assist in his 13 minutes of action during a 2-1 loss to RB Leipzig on Sunday.

Finally, Fabian Johnson, 31, earned a rare start for Borussia Monchengladbach on Saturday and was part of a 3-1 road win over Mainz where he played 81 minutes. While playing as a left midfielder, Johnson was quite but fairly solid. He completed over 80% of his passes and was part of one dangerous chance in the first half. Defensively, Mainz was ineffective attacking up his side of the field.


U.S. national team attacking midfielder Duane Holmes is looking sharp as he nears a comeback to Derby’s first team. On Friday he scored a goalazzo while playing 60 minutes for the reserve team. This should have him back on the first team sooner than later as Derby’s first team drew West Brom 1-1 on Saturday and could use a spark in the attack.


Duane Holmes.. goalazo. He looks pretty much recovered from his injury. Think he’ll be back with Derby’s first team sooner than later pic.twitter.com/KGFgRU0a8L


U.S. U-18 winger/midfielder Ethan Bryant is on the move after securing a transfer from San Antonio in the USL Championship to KSV Roeselare of Belgium’s second tier. Born in 2001, Bryant is eligible for the U.S. U-20 team and in moving to Roeselare, he will find himself on a team off to a slow start in the current season.

Andrija Novakovich had a relatively strong season in 2018/19 while on loan from Reading to Fortuna Sittard in the Eredivisie. The Wisconsin native had nine goals on the season. But in his return to Reading this summer, playing time has been hard to come by and the club has signed more strikers in the process.


Andrija Novakovich likely on his way back to the Eredivisie on a permanent deal with PEC Zwolle https://t.co/vEIRojEZ9s

Over the weekend, Novakovich was seen in the stands in Holland at PEC Zwolle’s 2-2 draw against Sparta Rotterdam. PEC Zwolle is a team that could certainly use help as its draw on Sunday was just its first point through four rounds of the Eredivisie season. It has scored just four goals and could use offensive help to avoid a relegation battle this season.