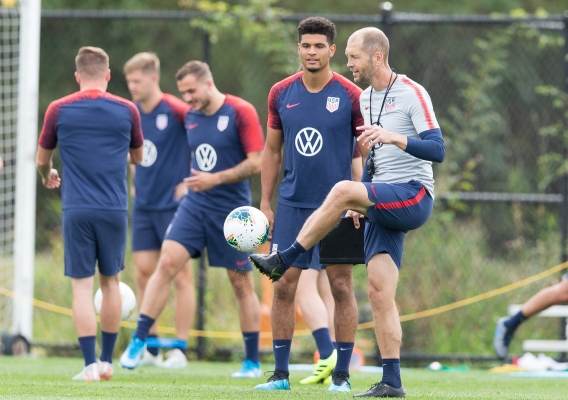 USMNT and U-23 analysis

Previewing and predicting the upcoming USMNT and U-23 November rosters

The releases of the USMNT and U-23 rosters for November are fast approaching and there are many factors at play in each roster. ASN's Brian Sciaretta offers up predictions while giving his take on how he thinks the rosters will come together.
BY Brian Sciaretta Posted
November 06, 2019
9:00 AM
IT WILL BE a busy week in American soccer coming up. MLS Cup will take place on Sunday as well as a full slate of games among Americans based abroad. On top of it all, U.S. Soccer will release the rosters for the full national team’s upcoming Nation’s League games as well as for the U.S. U-23 team which will have a camp in Spain.

The roster for the U.S. team comes at a tough point. The loss to Canada in October was brutal – not just in the result but in the overall attitude the team conveyed. It did not seem like a happy group of players and the desire was not missing.

Berhalter might have to make a few changes. We know Sergino Dest is rejoining the team for a cap-tying event, but what other changes can Berhalter make? The list of first-team players who weren’t selected for the October roster but who had a fair case is not that long. Duane Holmes had the strongest case and Julian Green’s season with Greuther Furth is better than last year. Antonee Robinson is also doing well but he is a U-23 option as well – and it might be better to have him with that team where he can start as opposed to being a backup with the full national team now that Dest is on board.

With that said: here is one potential 25-player roster for the U.S. national team for November.


There is a pre-camp going on right now in Florida and not all of those 20 players will make this roster. Some will make the U-23 team, some will go home. But there are some important tea leaves to read. The fact that Chase Gaspar made the roster means Daniel Lovitz has competition as the backup left back.

Central defense will likely see the return of John Brooks to the team although like Altidore, his ability to stay healthy with this team has made him unreliable.

Also, Wil Trapp has been a regular with the U.S. team this year but has been taking a backseat lately. He’s only played in one of the team’s last seven games and hasn’t played in over a month since Columbus did not make the playoffs. With Morales back and playing well, and Michael Bradley already ahead of Trapp, will Berhalter feel compelled to take all three?

The U.S. team was poor against Canada in the attacking midfield and it also struggled in this area against Mexico and Uruguay. Duane Holmes, Julian Green, and Jonathan Lewis could be potential additions. Holmes has resumed starting for Derby County, Green has had a pretty good season for Greuther Furth, and Lewis was one of the top performing attacking options for the U.S. U-23 camp.

From the previous camp, Brenden Aaronson might return to the U-23s where he is among that team’s better players. Tyler Boyd hasn’t justified another callup by virtue either of his play at Besiktas or the U.S. team.

At forward, the options are still not great. Josh Sargent is doing well for Werder Bremen while Jozy Altidore said he “needs a miracle” to play in MLS Cup this weekend. The forward has missed the entire MLS playoffs and was out of the October national team camp.

Will anyone replace Zardes as the backup forward with Altidore out? Perhaps. The best option would be Jeremy Ebobisse who is currently in the precamp at the moment.

Overall, it offers some changes from the group that played poorly against Canada but it still has the talent to get the job done.


The U.S. U-23 team has been progressing nicely while most of the headlines have surrounded the U.S. national team’s struggles. This camp will be in Europe – reportedly Spain – and the team will apparently be facing some high-profile opponents.

The fact that the tournament is in Europe should make it more accommodating for some European-based players who haven’t featured with the team recently. Among these players, expect Antonee Robinson, Cameron Carter-Vickers, Emmanuel Sabbi, Jonathan Klinsmann, and Uly Llanez to be in the mix.

It has been tough for Kreis to establish a core because in addition to star players like Josh Sargent, Weston McKennie, Segino Dest, and Christian Pulisic getting calls to the full national team (while Tyler Adams and Tim Weah would as well if they were healthy), Berhalter is also calling up players like Reggie Cannon, Jackson Yueill and occasionally Jonathan Lewis, Brenden Aaronson, and Paxton Pomykal (now injured).

In light of injuries to players like Paxton Pomykal, Sebastian Soto (who is only now resumed light training from a hamstring) as well as other players called up to the full team, how could the U-23 roster look? Here’s a guess.


With a camp based in Europe, it might be a good time to bring the last two U-20 starters into camp (Brady Scott and Jonathan Klinsmann) who are both based in Europe. If not, David Ochoa and JT Marcinkowski could also make the trip.

Defense should see most of the core contingent joined by Cameron Carter-Vickers and Antonee Robinson who bring plenty of experience of starting in the English Championship.

Midfield is also most of the same from previous camps with Hassani Dotson also able to provide cover in right back.

The forward positions are also very similar but perhaps Ulysses Llanez gets brought into the group despite being so young that he is also eligible for the U-20 team in 2021 and the U-23 team in 2024. His numbers with Wolfsburg U-19 team suggest a promotion might be sooner rather than later.

Two players to especially keep an eye on are Johnny Cardoso and Matko Miljevic – who are also both very young and eligible for the following U-20 and U-23 teams. Cardoso, a defensive midfielder, made his U.S. debut at the last U-23 camp and played for Internacional’s first team once in September. Miljevic, however, is putting up even more eye-opening statistics as he is playing regularly for an Argentinos Juniors team that is first in Argentina’s Primera. The central midfielder who was born in Miami has also played for the youth teams of Argentina and has revealed the Croatia are also interested.

No matter what, the U-23 team seems to be heading in the right directions and this is the last camp before things get very serious in early 2020 where qualifying awaits in March.