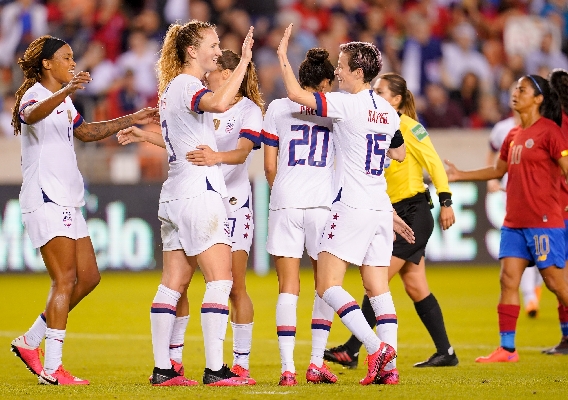 The USWNT finished group play in Olympic qualifying with a perfect record after a convincing 6-0 stroll past Costa Rica Monday night in Houston. ASN's John Halloran looks at the game and explores such issues as the growing role of Christen Press within the team.
BY John Halloran Posted
February 04, 2020
6:00 AM
THE UNITED STATES women’s national team wrapped up the group stage of Olympic qualifying on Monday night, downing Costa Rica 6-0 in Houston.

The game itself was largely meaningless, as both teams had already secured advancement to Friday’s semifinal. But the transcendent performance of Christen Press—including her third and fourth goals of the tournament—has raised an important question: Is it finally time for Press to become a first-choice starter for the American team?

No one actually knows what head coach Vlatko Andonovski’s preferred starting lineup is, as he’s only managed five games so far and the team has been dealing with various injuries and heavily rotating the squad from game to game. However, during Ellis’ five-year tenure, and especially her last three years when the team played in a 4-3-3, the preferred attacking line was clearly Megan Rapinoe and Tobin Heath on the wings with Alex Morgan at center forward.

The coaching change itself represents a fresh start and a chance to reconfigure the depth chart, to say nothing of the fact that Morgan herself is pregnant and out until at least the spring.

Many have advocated for Press to take Morgan’s spot as the team’s No. 9—at least in the interim—but a lot of that will depend on how Andonovski sees the role, another question that hasn’t fully been answered. Under Ellis, the center forward provided a presence in transition, winning punts and goal kicks in the air, checking back to get the ball and start the U.S. attack, and making runs into the box to get on the end of services from Rapinoe and Heath.

In that role, Morgan often found herself getting hammered by the opposition, with defenders slamming into her repeatedly over the course of 90 minutes. She spent time on the ground in nearly every match, trying to recover from hits to her head, elbows to her back, and fouls coming through the backs of her legs. And then she received criticism for not scoring more often.

That type of role is not suitable for Press and, assuming Andonovski doesn’t dramatically change the U.S.’ setup, it’s best left to Carli Lloyd—who demonstrated her value in the position on Monday with assists on the team’s first two goals. The first was a flick to Press, who drove forward, cut back a defender, and then curled a beautiful shot into the upper corner of the net.

On the second goal, Lloyd took a pass from Ali Krieger and then split two Costa Rican defenders with a perfect through ball to setup Lindsey Horan. Lloyd also led the U.S. in 2019 with 16 goals, nearly doubling every other American attacker even while getting fewer starts, and claims of her imminent demise have been wildly overstated.

So, as much as some have clamored for a front line of Rapinoe, Press, and Heath, it probably isn’t in the best interest of the team—or getting the best out of Press herself absent a total tactical rethink on Andonovski’s part.

Lining up on the wing, however, takes better advantage of Press’ skill set, her speed, and her ability to run at defenders in space. That was obvious again on Monday night when she burned past Costa Rica’s right back, dribbled into the box, and tallied her second goal.

Even at the club level, Press has often flourished in wide spaces. With the Utah Royals, head coach Laura Harvey played Press out on the flank and she scored eight goals there in only 14 matches last season. During her best years in Chicago, she often floated wide in a two-front because of the use of a No. 10 playing high and directly underneath the forwards, and she constantly shredded opposing defenses on the counterattack.

But starting Press on the wing leaves Andonovski with an equally brutal choice, having to decide whether or not he wants to bench Heath or Rapinoe—two of the most dynamic attackers in the world in their own right.

Rapinoe is coming off a World Cup in which she simultaneously won the Golden Ball and Golden Boot while some managed to claim that she hadn’t actually played that well in scoring six goals (three from penalties) and picking up three assists.

Heath is one of the original “next generation” players, often coupling her jaw-dropping technical skills with the audacity to try things in games that few in the world would ever dare. However, she also has a tendency to take too many touches, resulting in lost possessions and making it harder for teammates to time their runs. Heath also started six games in last summer’s World Cup, but finished with zero goals and only one assist.

In the past, Press has also struggled to make an impact in big games, something she herself has admitted. But she may have finally shaken that tendency this summer when she scored one of the most important goals of the tournament, a terrific headed goal against England in the team’s 2-1 semifinal win.

Coaching the United States women’s national team is one of the most difficult jobs in the game. It comes with an immense pressure to win, but also paralyzing roster decisions. It’s also what Andonovski signed up for, and if Press continues to play the way she has, the coach is going to need to find a way to fit her into his starting XI.