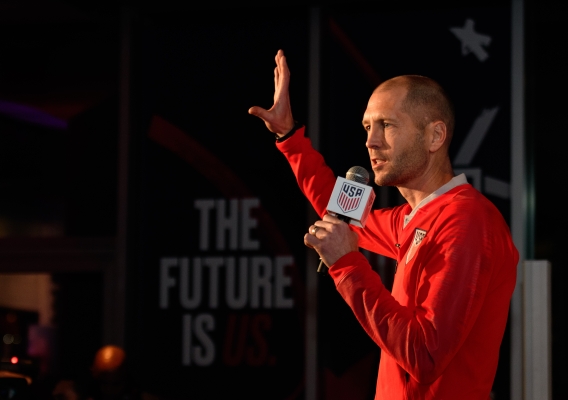 Predicting January camp: What could Berhalter's first camp look like?

It won't be long before new U.S. national team head coach Gregg Berhalter unveils his first ever roster for the team's 2019 January camp. What will that team look like? ASN's Brian Sciaretta offers up some thoughts
BY Brian Sciaretta Posted
December 12, 2018
1:00 PM
IN ABOUT A MONTH, the Gregg Berhalter-era of the United States national team will hit the field for the first time when January Camp opens in California. The annual gathering typically gives the national team head coach a chance to evaluate the MLS-based players in the player pool and build momentum for the incorporation of the internationally-based players later in the year on FIFA international dates.

It has been a long time since January camp produced an entertaining or even revealing game. Typically the games have been poor with almost all of the players still in preseason. Last year, FC Dallas did not even release its players to participate so that it could focus on the CONCACAF Champions League. It remains unclear if Berhalter will have 100% cooperation from MLS teams this year.

But there have been important moments in January camps over the years. While many American players have made their international debuts in January camps, perhaps no player used the camp more effectively than Matt Besler did in 2013. The Kansas City homegrown earned his first cap against Canada that year and from there enjoyed a very rapid rise as he started in important World Cup qualifiers throughout the Hexagonal that year, won a Gold Cup, and then became a World Cup starter in 2014.

Last year, Dave Sarachan introduced a lot of new players into the international game but the inexperience of the players eventually began to show. In his press conference, Berhalter said some of the veterans will be added back into the mix. Which specific players remains to be seen but that quote pointed in a direction to the U.S. team being more blended in terms of its age group. Bruce Arena’s teams were very old, Sarachan’s were very young. Berhalter’s teams will probably trend younger but have a veteran presence as well.

One thing to pay attention to is that there are several players in the U.S. player pool right now that are in Scandinavian leagues which are on winter break. In the past, U.S. coaches have had some success in getting Scandinavian-based players released although it remains to be seen if these clubs will accommodate in 2019.

Another is that this year is an Olympic qualifying year and U.S. Soccer still has no U-23 coach. Olympic soccer traditionally has been an important stepping stone for the men’s national team and the failure of the last two U-23 teams to qualify for the Olympics arguably caused (or was a symptom) of the team’s setbacks over the past four years.

In 2015, Jurgen Klinsmann used January camp to call-up many players who could play roles with the U-23 team for qualifying. While some U-23 players like Reggie Cannon are certainly going to be there anyway, will Berhalter give the benefit of the doubt to Olympic-eligible players to help in their preparation for Olympic qualifying? Such players could be Jeremy Ebobisse, Emmanuel Sabbi, Auston Trusty, Justen Glad.

The 2016 January camp was a rough time for U.S. Soccer as Klinsmann’s time was wearing thin. The 2017 camp was a nervous time as Bruce Arena was inheriting a tough spot in qualifying. The 2018 camp was still fresh in the aftermath of the huge qualifying failure and the lack of relevance under Sarachan.

The 2019 camp isn’t in the best of circumstances as the team’s supporters haven’t felt positive about the program in quite some time. This will be the fourth different coach in four years to oversee the team in January. But for the first time in years there is a clean slate, a new and permanent coach, and the opportunity to build something.

Berhalter has a good idea of the domestic-based players and there is a good chance he has a few players in mind who have not been part of the mix.

But here is a prediction with how the team might look.

The skinny: Steffen is the likely starter for both friendlies and the potential team No. 1 for the upcoming cycle. He recently finalized his Manchester City transfer but will remain in Columbus through July.

The skinny: Berhalter will have a lot of key players in central defense available to him in January. Aaron Long, Tim Parker, and Walker Zimmerman are three players with experience in 2018 who made strong enough cases to be in the mix moving forward. This is important as central defenders based in Europe are currently struggling (Matt Miazga, Cameron Carter-Vickers, and Erik Palmer-Brown). Auston Trusty and Justen Glad are Olympic-eligible picks.

There are not a lot of options for Berhalter at left back. Jorge Villafana, Greg Garza, and Ben Sweat are the best bets for this camp. Long term, however, there is a lot riding on prospects such as Chris Gloster and George Bello to work out.

Right back has some more promise. Reggie Cannon ended 2018 as the backup to DeAndre Yedlin on the full national team. Keegan Rosenberry had a nice bounce back season for Philadelphia. Brooks Lennon is a more speculative pick but he can hit an outstanding cross and, like Cannon, is Olympic eligible.

The skinny: Kellyn Acosta, Marky Delgado and Wil Trapp are holdovers from the past year in central midfield. When Berhalter mentioned some veterans coming back into the mix, Bradley is one of the possibilities although that will be a difficult decision for Berhalter since there are so many young central midfielders trying to push through.

Cristian Roldan, Paul Arriola, and Sebastian Lletget are more attacking options along with Romain Gall and Jonathan Amon who play for teams which have winter breaks. The release of Gall and Amon is far from certain, however, as Malmo have Europa League games and Nordsjaelland typically are reluctant to cooperate. For Amon, there is also a possibility he is with the U.S. U-20 team to for their January camp.


The skinny: The forward pool is bleak at the moment – both domestically. It is full of a few veterans and a bunch of prospects. There is no player really established at this position who is in his early or mid-twenties which is an ideal age to be starting a cycle.

The decision to bring back Michael Bradley is tough because of the readily available full professionals who are pushing at the various central midfield positions. The decision to bring back Jozy Altidore is not difficult. Even when look at the abroad-based pool. Josh Sargent and Tim Weah are still prospects with very limited minutes. Bobby Wood and Altidore are still very much in the mix until they are clearly pushed out.

Gyasi Zardes has his limitations but has played well under Berhalter and has had nice moments with the national team before – most notable when he was effective at the 2016 Copa America. Corey Baird showed well in his first pro season for Real Salt Lake and was named the MLS Rookie of the Year.

Jeremy Ebobisse and Emmanuel Sabbi are also picks with eyes to the U-23 age group. Ebobisse recently started for a Portland team that made it to MLS Cup and Emmanuel Sabbi scored a lot with Hobro in Denmark to start the season, although he has cooled off quite a bit since September. Sabbi and Ebobisse were teammates on the 2017 U-20 World Cup team. But Berhalter is familiar with Sabbi who trained with Columbus for awhile during the aftermath of his failed transfer to Las Palmas in 2017.