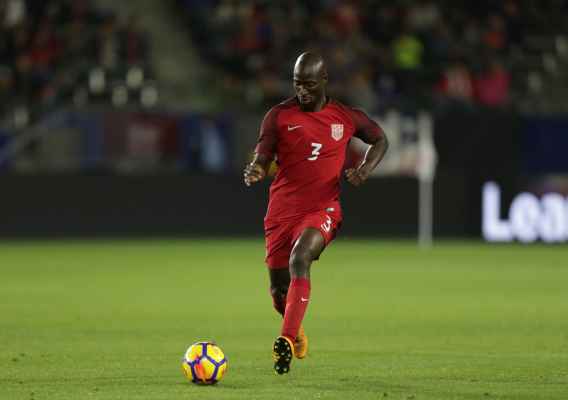 The 2018 January camp was as bad as most of the previous versions which feature rusty players who haven't even started preseason yet. This year, however, the U.S. team has no head coach and no meaningful games on the horizon to it seemed even more of a letdown than usual.
BY Brian Sciaretta Posted
January 28, 2018
7:15 PM
THE UNITED STATES NATIONAL TEAM played to a scoreless draw with Bosnia and Herzegovina on Sunday night in Carson, California. Like most January camp games, it was boring, dull, almost unwatchable and apparent that every player was in preseason form.

January camp is still worth having as it gives staff a chance to evaluate players and build the player pool. Many top American players have also taken their first steps with the U.S. team at January camp. But for fans, it’s almost always a disappointing letdown.

This year was no exception. But after coming off a failure to qualify for the World Cup, fans were hoping that this January camp could at least be better than usual just to give a reason to cheer on a team that is at a low point. That turned out not to be the case and the game turned out to be as bad as usual.


Bill Hamid: Set to make his move to FC Midtjylland, Hamid kept Bosnia off the board in his 45 minutes of action. His best moment came in the 43rd minute when he made he made a pointblank save. The opportunity from Bosnia, however, was created from Hamid’s bad outlet pass. Rating: 6.5

Justin Morrow: The Toronto left back was mostly invisible and inactive throughout the entire game, which on the balance is probably is a complement. Rating: 5.5

Walker Zimmerman: The FC Dallas central defender had a mixed night. He was steady for long stretches but should have managed a clearance in the 43rd before Hamid’s big save. He also conceded a penalty in the 50th minute. Rating: 5.0

Ike Opara: The Sporting Kansas City central defender was positive. He made a great defensive play in the 29th minute when he broke up a close-range Bosnian chance. In the first half he had a few tough fouls. In the 79th minute he had another very nice block in the box to deny a shot from reaching Steffen. Overall, he was the most consistent U.S. performer in the game. Rating: 7.0 and MOTM

Matt Polster: In the first half Polster struggled to find his way into the attack from the right back position. He was better offensively in the early part of the second half but then was beaten defensively several times in the second half. Had a poor moment in the 74th minute where he was exposed defensively on a dangerous Bosnian chance. Rating: 4.5

Wil Trapp: Wearing the armband, Trapp played the holding midfield spot in a 4-1-4-1 formation. His passing improved as the game went on. He helped circulate the ball with a purpose. He did struggle when under pressure. Rating: 5.0

Gyasi Zardes: A few decent plays that were overshadowed by bunch of turnovers, Zardes did not make a positive impact in this game for the U.S. team. Rating: 4.0

Tyler Adams: The teenager was active early in the game but faded in the second half. Didn’t look in synch with his teammates. Rating: 5.5

Cristian Roldan: The Seattle Sounders central midfielder was decent at some moments but also did not do much to help break the game open with his passing. He has a very good chance in the 60th minute on a cross into the box but his shot missed to the left. Rating: 5.0

Jordan Morris: The Sounders forward was part of most of the team’s best chances but his final ball or shot was lacking. He often had the right ideas and made some nice runs, but the rust was apparent. Due to injuries, he played very little soccer since last summer. It showed. His speed was tough for the Bosnian defenders. Rating: 5.5

CJ Sapong: The Union forward left after the first half and it was mostly a positive game for him. Of course his final ball could have been better but he was doing his part to get into dangerous position. His strength and mobility were tough to defend. Rating: 6.0


Zack Steffen: The Columbus Crew goalkeeper was called into action a few times in his USMNT debut. He was lucky he did not have to make a save on the 50th minute penalty. His first nice save was in the 66th minute when he dove to his right on a low-driving save. But overall, he didn’t have the opportunity to make a defining save. Rating: 5.5

Kellyn Rowe: After coming on at halftime, Rowe missed a few chances but also played some really good balls – such as setting up Morris after getting on the end of Agudelo’s great pass. It was refreshing to watch he try to make things happen. Rating: 6.0

Paul Arriola: Like Rowe, Arriola tried to open the game up but it was also important to see him track back and be effective helping defensively. His effort is commendable. Rating: 6.0

Juan Agudelo: Replaced Roldan in the 69th minute and was pretty good. He initiated the best offensive play of the game when his beautiful long pass was perfectly played to Rowe. Morris ended up missing the final product. Rating: 6.0

Rubio Rubin: The out-of-contract forward came on late and had a few nice touches, but nothing that had any impact. Rating: No rating