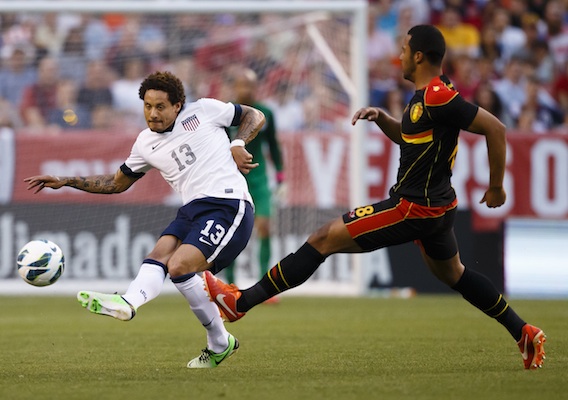 Josh Deaver checks in with his player ratings from the American's loss to Belgium. The good: Tim Howard and... um... Jermaine Jones? The bad: Yeah, that would be almost everyone else.
ASN Slideshow

BY Josh Deaver Posted
May 30, 2013
11:00 AM
No excuses. That was a beat down. To borrow a line from Ian Darke, a strong Belgium side left the U.S. national team bemused and befuddled on the way to a 4-2 loss Tuesday night in Cleveland. The Red Devils bossed the proceeding from the opening whistle, attacking the American net early and often. It was 1-1 at the break, but a second half header from Marouane Fellaini and a Christian Benteke brace sealed the deal. Jurgen Klinsmann once again tinkered with his starting XI, but another subpar performance only served to reveal how much the team must improve. There was little to take away from Tuesday night’s debacle and even fewer bright spots. True, it was only a friendly, but that logic works both ways. In the end, the U.S. was simply outclassed and soundly beaten. With serious concerns lingering heading into three crucial matches, here is the team’s report card for Tuesday night. Tim Howard: 6.5 Howard could hardly be considered at fault for the opening goal. He came out strong and cleared his line, only to have the slow reaction time of both Omar Gonzalez and Geoff Cameron allow his Everton teammate Kevin Mirallas to open the game’s scoring. Otherwise Howard delivered another solid performance, making two saves during his 45-minute shift. Omar Gonzalez: 3 In stark contrast to his performance against Mexico only two months ago, Gonzalez looked lost. After getting caught ball watching on the opening goal, a poor first touch in the box gifted the visitors a scoring opportunity to make it 2-1 early in the second half. Inconsistency seems to be the knock on Gonzalez who has had lapses for LA Galaxy this season as well. His performance will be vital for the remainder of World Cup qualifying. He must find a way to steady his play. Clarence Goodson: 3.5 It was a middling performance from the Brondby man. Generally, he was efficient but his lack of pace often proves troublesome against more athletic competition. Wednesday was one of those nights. Goodson was frequently caught ball watching, allowing the speedy Belgium forwards to run behind the back four with ease. Partially at fault for at least two goals, his hesitation allowed Christian Benteke a wide open shot on goal to put Belgium ahead, for good, in the 57th minute. Geoff Cameron: 4 He scored the equalizer, but his defensive support was lacking. His continued struggles at right back for the national team have to make the U.S. staff wonder about his future at the position, despite playing the role for Stoke City. Cameron said he was brought in to man the center of defense and perhaps lining up on the right is a stop-gap measure for Klinsmann, but the lack of options in that position could prove troublesome in upcoming qualifiers. DaMarcus Beasley: 5 Celebrating his 100th cap for the national team, Beasley—good or bad—put in the most competent defensive performance of the night. He got forward when he needed to but should also be praised for his work against the power and speed of Romelu Lukaku and the skill of the Belgian attack. Despite his lapse on Belgium’s fourth goal, Beasley had some good moments. He was also fortunate to not be whistled for a handball in the first half. As unlikely as it seems, his recent form could realistically put him in the conversation for a starting left back role next week when qualifying gets under way again. Jermaine Jones: 6.5 As much talk as there is about his penchant for accumulating yellow cards, there is no doubt Jones is a top-class player and vital to the U.S. passing and possession. Jones was strong in midfield once again against Belgium, completing 88 percent of his passes, recovering well, and winning several contested balls. The Schalke man has proven to be a near automatic inclusion for Klinsmann, and Wednesday night gave no indication that his position would, or should, change. Brad Davis: 4.5 A surprise addition to the starting XI, the 31-year-old attempted to use his strong left foot to bring some width to the U.S. attack. Unfortunately, he didn’t offer much in attack. He had a few useful balls into the box but nothing that should move him ahead of other wing options. Sacha Kljestan: 5 Receiving his first start in the Klinsmann-era, Kljestan was solid but, overall, did not put in the kind of performance that will put him in the starting XI. He was good in possession and while he showed flashes of technical excellence, poor final balls killed several U.S. forays. He grew less effective as the second half wore on and came out in the 81st minute. Graham Zusi: 5 Much like his performance at Azteca, it was another workman’s job for the Sporting KC midfielder. He was better on set piece delivery and helped set up Geoff Cameron’s goal. Zusi also committed to defense and prevented another Belgian opportunity early in the first half with a well-placed tackle in the box. Clint Dempsey: 6.5 Once again, it seems all offensive output from the national team comes though the talented Texan. With his converted penalty kick on Tuesday night, Dempsey has now scored eight goals in his last nine matches for Jurgen Klinsmann. He also picked up an assist on Geoff Cameron’s goal thanks to a well-placed header inside the box. Despite these contributions, Dempsey was left on an island in the middle of the field and was forced to drop deep too often, something which has become a frustrating sight in recent matches. Jozy Altidore: 4 Another match, another “golden opportunity” for Altidore to regain his form with the national team. It seems Klinsmann’s game plan was to feed Altidore by way of crosses from the wing but, once again, the result came up wanting. His best opportunity came in the fifth minute, but he could not control a well-placed cross from Clint Dempsey inside the six-yard box. He came off at the half.

Brad Guzan: 4.5 The Aston Villa keeper is used to his defense letting him down, and tonight was no different. Although he conceded three times—twice to club teammate Christian Benteke—there wasn’t much Guzan could have done. The scoreboard won’t look kind upon him, but his only major gaffe was failing to properly deal with the cross that lead to Marouane Fellaini’s goal. Eddie Johnson: 6 Coming on at halftime for a gassed Altidore, Johnson injected some much needed energy into the U.S squad. Despite success up front in Seattle, he is a creative force on the wing for Klinsmann. In addition to drawing the dubious penalty call, Johnson consistently looked to take on defenders and was able to deliver more service into the box than almost any other American in only 45 minutes of action. Terrence Boyd: 4.5 The Rapid Vienna goal scorer is still looking for his national team breakthrough. A poor clearance from Boyd was partially to blame for Belgium’s third goal on the night. In the attack, Boyd narrowly missed an opportunity off a cross from Johnson but could not bring the ball down for a shot. Matt Besler: INCOMPLETE The Sporting KC defender was lucky not to concede a late penalty, but otherwise performed fine. After Goodson’s performance, it’s entirely possible Besler sees more time in upcoming games. Brad Evans: INCOMPLETE With only 20 minutes, Evans had no real effect on the game. He nearly got on the score sheet after redirecting a shot by Seattle teammate Eddie Johnson but otherwise turned in a forgettable 20 minutes. Stuart Holden: INCOMPLETE This game may ultimately be remembered as Stuart Holden’s return to the national team. Welcome back. Josh Deaver is a former academic turned soccer obsessive. Follow him on Twitter, @USFootballGuy.