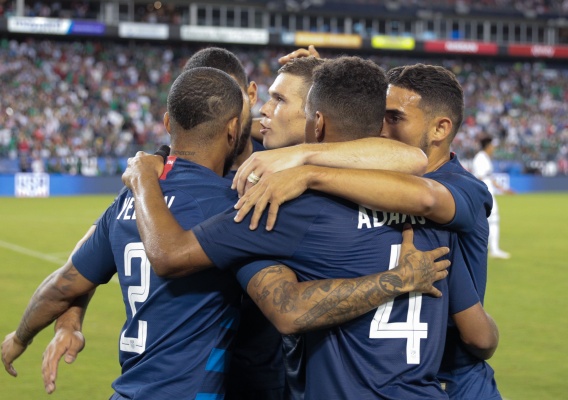 The United States national team defeated Mexico 1-0 in what has to be seen as another step forward for the team's emerging young core. The U.S. team struggled at first but found its way into the game. Here are the player ratings from Brian Sciaretta.
BY Brian Sciaretta Posted
September 11, 2018
7:30 PM
THE UNITED STATES national team concluded the September international window with a 1-0 win over archrival Mexico in Nashville, Tennessee.

The game started off ugly for the U.S. team as Mexico controlled the pace of the game and always looked more dangerous. An unfortunate injury to Weston McKennie, however, forced head coach Dave Sarachan to change formations with Julian Green coming into the game.

The U.S. team began to play much better after that and then the red card to Mexico changed things for the better and allowed the game to open up.


Zack Steffen: The Columbus Crew goalkeeper made a very good reaction save on Alvarez in the 16th minute off a Mexican corner kick. Later in the half he played a ball with his hands outside the box on a mistake but was able to keep the game scoreless at the half. Rating: 6.0

Shaq Moore: The right back had a decent shift in the game. He didn’t really press forward but he did a very nice job shutting down Mexico on his side of the field. Rating: 5.5

Matt Miazga: In the second half, he displayed leadership in getting into an altercation with Mexico. It brought much needed energy into the game. Defensively, he stood tall in helping to preserve the cleansheet. Rating: 7.5

Cameron Carter-Vickers: While quieter than Miazga, he was solid yet again in defense. Rating: 6.5

Eric Lichaj: It was clear Lichaj was not as comfortable with his left foot and this prevented him from being an offensive threat on the left flank. Defensively, he made some nice plays but it is obvious he needs to be on the right side. Rating: 5.5

Wil Trapp: It was a brutal first half for the captain. His foul on Alvarado in the 14th minute gave up a dangerous free kick. Then in the 37th minute, he was caught out of position on the right flank and burned by Diego Lainez. But it was a much better second half from Trapp who helped with possession, even before the red card. Rating: 5.0

Kellyn Acosta: Like Adams, Trapp, and McKennie, Acosta was a victim of a rough formation to start the game. When Green came on and the formation allowed for more offense, Acosta began to shine and distribute the ball well in the attacking third. He started the play to Robinson that resulted in the goal from Adams. Rating: 6.5

Tyler Adams: When the game opened up, Adams began to play like he does for the Red Bulls. He pressed defensively and scored a nice goal on a wonderfully timed 30 yard run. Rating: 7.0

Weston McKennie: Was forced out of the game in the 40th minute with an injury. He did not have much of an impact on the game, mostly due to formation. Rating: 4.5

Tim Weah: The PSG attacker was lively and in the 42nd he took a shot that forced a free kick. Was more dangerous when he cut into the middle of the field or on the counterattack. Nearly connected with Zardes for an assist in the second half. Rating: 6.0

Gyasi Zardes: The Crew SC forward was stranded for most of the first half but showed some nice holdup ability when he drew a foul in the 27th minute just outside the box. In the second half, he made some decent runs and nearly scored on one. Rating: 5.5


Julian Green: came into the game in the 40th minute for Weston McKennie and helped to fix a brutal formation. Overall, it was one of Green’s best games in a U.S. uniform. He brought a much needed connection from the midfield to the attack. Rating: 7.0

Antonee Robinson: came in for Lichaj in the 56th and was extremely dangerous and effective on the left side. He allowed the U.S. team to play wide and that allowed him to assist on the Adams goal. Rating: 7.0