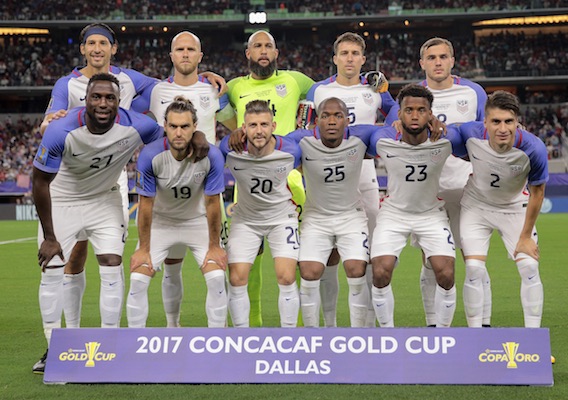 The U.S. men's national team put together its best performance of the 2017 Gold Cup, defeating Costa Rica 2-0 and locking up a place in the final. Here's a look at how the individual players performed.
BY Brian Sciaretta Posted
July 22, 2017
6:00 PM

THE UNITED STATES men's national team advanced to the final of the 2017 Gold Cup after a 2-0 win over Costa Rica in its best game of the tournament. It was a complete performance featuring some exceptional individual efforts and no noticeable weak links.

In the first half, the U.S. controlled the game but its final ball and finishing was noticeably lacking. Then, in the second half, the team played just as well but Bruce Arena brought in Clint Dempsey off the bench to help put the team over the edge. Everything worked to perfection.

Many U.S. players were in top form. Matt Besler had his best game for the U.S. in a long time. Kellyn Acosta continued to grow into the team and Michael Bradley seems to be loving his time without Jermaine Jones as his partner. Darlington Nagbe, meanwhile, continues to showcase his skill but his lack of a nose for a goal.

Overall, the team now has the momentum heading into Santa Clara Calif., on Wednesday where it will face the winner of Sunday’s other semifinal between Jamaica and Mexico.

Tim Howard: While the Yanks generally controlled the game, Howard had to make two big saves—both on Marcos Urena. Both times, Urena went low and Howard came up with the saves in the 37th and 71st minutes. Rating: 7

Jorge Villafana: It was a good outing from the Santos Laguna left back who got forward effectively on occasion and shut down a lot of Costa Rican attacks down his side. Rating: 6.5

Matt Besler: Besler has a performance to remember against Costa Rica. He hardly put in a wrong foot all game and his distribution was strong. He made a case to start against Mexico. Rating: 7.5

Omar Gonzalez: Was generally solid but had a few moments where he struggled to contain Urena, who had the two best chances on the game. Rating: 5.5

Graham Zusi: There was some debate about whether or not Zusi or Eric Lichaj would start. Over 90 minutes, Zusi acquitted himself well. He avoided any major defensive errors and had a few good crosses—one in particular landed at Nagbe’s feet but the Portland midfielder was not ready for it. Rating: 6.5

Darlington Nagbe: The Portland Timbers mainstay has a ton of skill and played well again tonight. He still needs more of a killer instinct near the goal but he controlled the flow of the game. Rating: 7.5

Kellyn Acosta: The FC Dallas central midfielder was leading the game in touches before he came off late. He could have given the U.S. an early lead but his close-range shot flew over the bar. He also produced a nice shot from distance in the second half. Acosta's passing was generally solid and crisp. He’s not there yet, but he’s growing into the national team and developing a nice partnership with Michael Bradley. Rating: 6.5

Michael Bradley: After a good game against El Salvador, Bradley was much better against Costa Rica. The captain controlled both sides of the ball in the middle of the field. He’s been improving for the national team in 2017 and that is a very good sign. Rating: 7

Paul Arriola: His speed gave Costa Rica fits and he was able to get into several dangerous positions. As in previous games, his final ball in the final third of the field needs work. He is fun to watch and the potential is there. Rating: 6

Jordan Morris: The Seattle Sounders product came out strong with a shot that hit the post inside of the first few seconds. Later in the first half he was an important part of the combination that created a great chance for Acosta—who missed. In the second half, Morris was not as dangerous but his movement did help to create holes in the defense and open up the game. Rating: 6

Jozy Altidore: After displaying effective hold-up play, Altidore finally got a great chance to put the U.S. in the driver’s seat, which he did when he finished off Dempsey’s throughball. It wasn’t a perfect game. He should have shot the ball he elected to pass to Acosta in the first half. He had a few other chances. But he was very important to the win. Rating: 6.5

Clint Dempsey: In a Texas homecoming, Dempsey changed the game after coming on after the one-hour mark. His assist and goal were the difference in the contest but he put fear into Costa Rica and lived up to expectations as he might be making the transition to U.S. super-sub. Rating: 8.5

Gyasi Zardes: The LA Galaxy winger did not have enough of an opportunity to impact the game. Rating: NR

Dax McCarty: The Chicago Fire central midfielder did not do enough to earn a rating. Rating: NR

Bruce Arena: You can’t really debate any decision Bruce Arena made. Having Dempsey come off the bench was smart. The Acosta-Bradley central midfield pairing worked, as did the Besler-Gonzalez match in central defense. Even Zusi justified his starting spot. The team was vastly improved from Wednesday’s effort against El Salvador. Rating: 7.5

You've seen Brian's ratings—now create your own with our interactive tool.