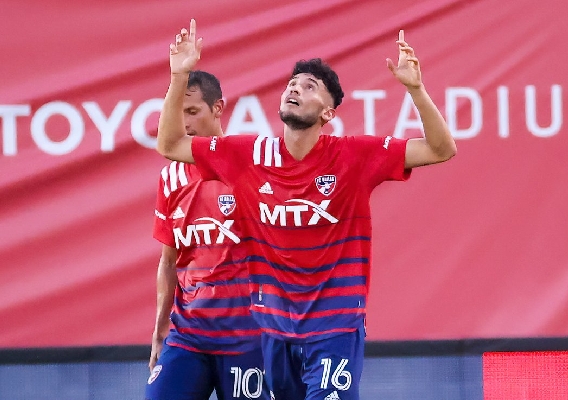 It's a trying time for most MLS teams as schedule congestion and a massive depletion of talent to international tournaments is bringing about weird results. Still, the games count and some teams took advantage. Meanwhile, the league continues to be geared to youth and Ricardo Pepi's hat trick is the latest sign.
BY Brian Sciaretta Posted
July 26, 2021
12:00 PM

THE PAST WEEKEND IN MLS continued to be overshadowed by the Gold Cup with just about every team getting drained by the absence of players for international duty. Some teams, like Atanta, are missing key players for the Olympics as well.

It is certainly a weird time of the season and the results can be misleading. On the other hand, it is forcing teams to dig deep to take advantage of the opportunities to pick up points.

Some teams essentially gave up. It’s hard to make anything of NYCFC’s 5-0 win over an Orlando team that couldn’t even be bothered to show up. The LA Galaxy were steamrolled by FC Dallas – something that probably wouldn’t have happened any other time of the year. The same with Colorado which was missing Sam Vines and Kellyn Acosta in a 3-0 loss to Real Salt Lake.

But this games are all about who can take advantage and a team’s normal strength is irrelevant.

On Saturday night, FC Dallas pounded the LA Galaxy 4-0 behind a historic effort from Ricardo Pepi, 18, who became the youngest player to ever register a hat trick in MLS. He now has eight goals in 783 minutes this season and he’s now tied for the third leading scorer in the league this season behind Raul Ruidiaz and Chicharito.

Pepi is emerging as the striker that many hoped he would become. He’s clinical with his finishes and is getting into all the right positions to score. Even in this game when he didn’t score, he was making the right runs.

Ricardo Pepi’s second goal of the half. FC Dallas 2-0 over the LAG at HT. FCD with a big half pic.twitter.com/bZrU6qqxZS

Ricardo Pepi’s slick goal for FCD for a 1-0 lead on the Galaxy pic.twitter.com/yEAjJzShnp

This performance and the attention it has gotten is sure to increase the what is becoming a potential international recruiting battle between the U.S. and Mexico. This is also a battle the United States does not want to lose as Pepi has long been a part of U.S. youth national teams and is set to begin the 2023 U-20 cycle. Losing him would see the departure of one of the best forwards prospects in the player pool.

Dallas is solid at home but has had too many struggles to be in a good position for the playoffs. This game, however, reminded everyone just how good their academy is at churning out players. In addition to Pepi playing well, Justin Che had another great performance and what ASN is hearing is that Bayern is certainly still interested in Che despite Che remaining with Dallas in 2021. Also, Paxton Pomykal has his best game of 2021 and he is gradually returning to where he needs to be.

As for the Galaxy, the team has been hurt by the international window without Efra Alvarez, Jonthan Dos Santos, and Sebastian Lletget. But this was a disappointing performance from them.

Expectations were high in Minnesota to start the season. Then they lost their first four games and we labeled a bust. But over their last 10 games, they’ve won six, drawn three, and lost just once.

Tough road ahead for the boys.

They’re still not playing as well as they can but they’ve been able to make enough adjustments to score a few more goals and conceded a few less, and its been a big reversal of fortunes. They’re still walking a thin line of success and failure but they’re right side of the narrow margin.

On Saturday it was a 2-1 win over Portland that moved the club into sixth place. Emmanuel Reynoso was the best player in the game (and one of the best players in the league over the weekend). Robin Lod and Hassani Dotson also played effectively on both sides of the ball to help matchup with Portland’s physical midfield.

Reynoso played the attacking midfield position the same way a healthy Lodeiro does – he worked hard to get on the ball as much as possible and take control of the game, Reynoso had 104 touches and Dotson had the second most with 81.

Even with Portland missing Eryk Williamson, Minnesota deserved this win and they’re playing to their strengths now as they’re best players are more involved.

All things considered, the Red Bulls aren’t a bad team this season. They have a lot of interesting players who have shown a lot of quality. But the team has been slow to react to the injury to Aaron Long and, combined with other injuries to central defenders, the team is paying a big price.

On Sunday, the Red Bulls dropped a 1-0 decision to DC United in a poorly played game by both teams. DC United’s lone goal originated from a mistake by Red Bull central defender Amro Tarek.

Red Bull manager Gerhard Struber admitted this issue has gone on long enough and that the team is close to signing central defenders.

Struber says #RBNY is “close” on “1-2” transfers at center back but “needs to be right” type of player.

This was always going to be a curious game as it involved two high-energy, high-press teams that look to quickly get the ball forward, get a chance, press after losing possession and repeat. The game, not surprisingly, was ugly. In the end, the frantic play yielded just one goal on a mistake.

But credit to DC United, they’re getting the results right now and, along with Minnesota, have been quite the turnaround this season as they have gradually bought into Hernan Losada’s system.

For the Red Bulls, the team welcomed Caden Clark back to the starting lineup after his appendectomy and he was rusty. Patryk Klimala and Fabio had their worst outings of the season up top. The team’s best player, yet again, was John Tolkin. The young left back continues to have a breakthrough season.

It looks far likely that Gianluca Busio has played his last game for Sporting Kansas City. The immediate concern right now for SKC is how will the team move beyond Busio – who was getting 80-105 touches a game and having the offense flow through him.

On Sunday, SKC made an important statement – not that it will contend but that the loss of the USMNT teenager to Venezia wouldn’t be a big setback. A 3-1 road win over Seattle is impressive given that both Busio and Alan Pulido are way on international duty.

Meanwhile, Seattle started most of its veterans with just the Roldan brothers missing due to injury duty.

How did Kansas City do it? Several other players stepped up. Remi Walter was the best player on the field. Young homegrown Cameron Duke, meanwhile, added his first career goal.

Seattle has played admirably this season but having Ruidiaz carry the team isn’t enough. This club needs some combination of Lodeiro, Stefan Frei, Nouhou, the Roldan’s, and Will Bruin back. They obviously won’t get Jordan Morris back. Also, the addition of Wesley from Palmeiras could be a big game changer. They’re so far from what they could or should be.

Nashville might not get the national attention others in the league get, but they are a smart team which is built by veterans. The survived its expansion season with a defensive approach but now the team can score.

In Saturday’s 2-0 win over Cincinnati, it held Cincy to without a shot on goal. The win moved it into second place in the Eastern Conference. CJ Sapong had two goals and an assist. Hany Mukhtar had two assists.

Nashville has lost just once in 15 games and seems to be just hitting their stride. Sapong is playing well but probably will find minutes harder to come by with designated player Ake Loba joining. Walker Zimmerman should be back in a few weeks.

Nashville has been so smart with how they went about building their team. Pragmatism and defense in year one followed by addressing weaknesses in year two. Saturday’s game offered a sharp contrast to FC Cincinnati which came into the league in 2019 but is much further back due to the lack of such a plan. Instead, Cincinnati has just been trying anything and hoping it works – which it generally hasn’t.