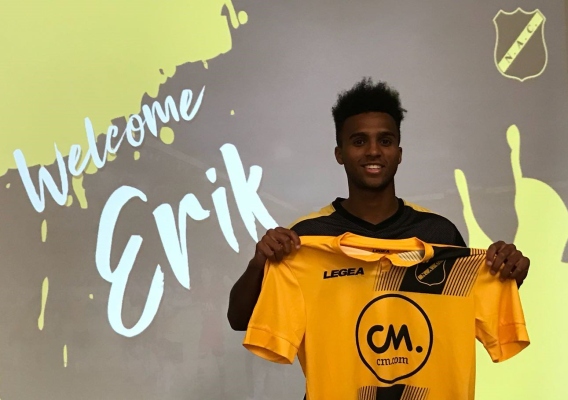 There is a lot to talk about today including a new gig for Erik Palmer-Brown and strong rumors surrounding Bobby Wood and Romain Gall. Also, big news for the U-20 team as Lennard Maloney is called up and Richie Ledezma is on a big trial - which raises important questions.
BY Posted
July 09, 2018
5:05 AM
IT WAS A VERY busy weekend for Americans abroad as Erik Palmer-Brown found a new club and Bobby Wood is closing in on a new destination. There was big news for the U-20 team as German youth international is joining the fold and a top midfielder is starting a PSV trial.


United States international Erik Palmer-Brown, 21, signed with Manchester City last year on a four and a half year deal. When he signed the deal, it was obvious that he would go on loan for several upcoming seasons. Last spring, he played with Kortrijk of Belgium’s top flight.

Over the weekend it was announced that Palmer-Brown would play the 2018/19 season on loan at NAC Breda which is coming off a 14th place finish in the Eredivisie last season.

This is a smart loan but one where Palmer-Brown must perform well. The good news is that it will likely result in playing time given NAC Breda’s affiliation with Manchester City. There is incentive for the club to play him – which is sometimes tough for loaned players.

But what this will do is give Palmer-Brown the chance to play a full season and perhaps surpass 2000 minutes for the first time in his career. If he performs well, this could set the stage for a more high profile loan in one of Europe’s top leagues – and a loan that could likely include an option to buy.


It looks like United States international Bobby Wood will be remaining in the Bundesliga as a move to Hannover 96 is apparently imminent. The move would be a loan from Hamburg SV that includes an option to buy.


Looking like Bobby Wood is on the move very soon - to Hannover. Loan with option to buy #USMNT https://t.co/K3RXLyN3HM

After a poor season in 2018/19 that resulted in just two goals for Wood on a Hamburg team that was relegated out of the Bundesliga, the Hawaiian will be given another opportunity to prove himself in Germany’s top flight. Hannover is coming off a season where it finished in 13th place

Wood, 25, will be under pressure to perform well this season. If he does well, Hannover will exercise its option to buy and 2017/18 will be just a blip in his career. Another poor year, however, will jeopardize his career as footballer capable of playing in a top league.


The United States U-20 national team will open camp in Raleigh, N.C. on July 15 and one such player who will be making his debut is Union Berlin central defender Lennard Maloney, 18, who has also played for Germany’s U-18 and U-19 national teams.

It is a good move for U.S. U-20 head coach Tab Ramos as central defense is among the most unsettled positions on his team. With World Cup qualifying fast approaching in November, Ramos might have solved one of his team’s biggest weaknesses.

The central defense position was previously anchored by Philadelphia Union central defender Mark McKenzie but his partner was unclear. FC Dallas homegrown Chris Richards was one such possibility. But Maloney could be in a position to be a starter for Ramos.

Also, ASN is hearing that Real Salt Lake academy product Sebastian Soto is also on the call-up list for the first time at the U.S. U-20 level. That would be two huge U-20 debuts for Ramos in Raleigh.


Orebro’s Brendan Hines-Ike, 23, is one of the best defenders in Sweden but the Colorado native suffered an injury on Saturday in a 2-1 loss to Elfsborg – and all goals were scored after Hines-Ike left the game in the 25th minute.

The severity of the injury is unknown but it came after a collision with an opposing attacker. The injury comes at a very bad time for Hines-Ike as Orebro confirmed that Hines-Ike is being scouted by numerous clubs for a potential move this summer. Those most commonly linked were clubs from the Eredivisie.


Richard Ledezma, 17, is a top American prospect and a key part of the U.S. U-20 team. The central midfielder has come up through the Real Salt Lake academy but has not signed a homegrown contract with Real Salt Lake despite having an offer.

Right now, the Arizona native is on trial with Dutch powerhouse PSV Eindhoven where he will remain until, presumably, the start of the upcoming U-20 camp.

It presents a massive problem that MLS teams and American soccer will have to solve. While it is good for top young American players to move to good situations in Europe (not just any situation), it is unhealthy and potentially destructive to see good development in the United States to go uncompensated. Like Weston McKennie, Ledezma has spent years with Real Salt Lake’s academy.

To make matters worse, Real Salt Lake is on the verge of losing top prospects and U.S. youth internationals Ledezma, Taylor Booth, and Sebastian Soto to Europe without receiving a dime. And Real Salt Lake is a team that actually does play its youth players – so fear of a lack of first team playing time is not the case here.

The reasons for this being a huge problem are obvious. If good development continues to go uncompensated, you get less good development. It is hard to expect Real Salt Lake to continue to invest heavily in youth development if it loses its best players.

A model where academies get to keep their B-level talent but lose their A-level talent for nothing is not going to work in the long run.

For Ledezma, however, this could be a great opportunity for the highly talented central midfielder.

Jesse Marsch left his position as head coach of the Red Bulls on Friday for a position with RB Leipzig was undefined. On Monday, the club announced that Marsch would be an assistant coach – but a powerful one at that.

It is a bold move for Marsch who wants to get his foot in the door in Europe – where American coaches have had a tough time making inroads. After this season, it remains to be seen what is next for Marsch.


American winger Romain Gall, 23, has had a strong first half of 2018 in Sweden for GIF Sundsvall where he has nine goals and five assists in 15 games across all competitions.


Swedish report linking GIF Sundsvall's American winger Romain Gall to a potential move to Malmo. If it were to happen, Gall would stay in the same league but move to the defending champions who play Champions League qualifiers starting tomorrow. https://t.co/cvcg0ZDJRP

GIF Sundsvall has publically admitted that there is a lot of interest this summer for the French-born Gall. Until most of the clubs rumored have been in Holland but Swedish reports on Monday have indicated that reigning Swedish champion Malmo is also a contender to sign Gall.