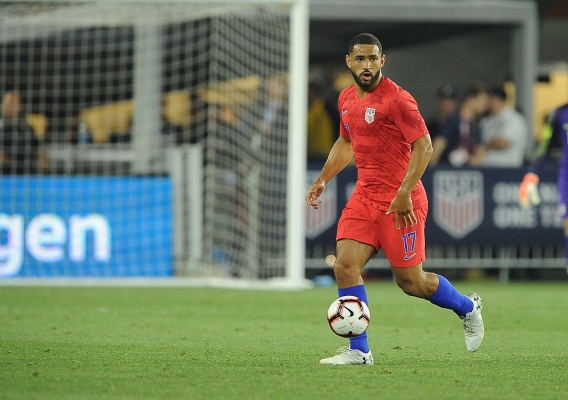 Once a prospect, now a veteran, Carter-Vickers looks to lead U-23s to Tokyo

Cameron Carter-Vickers is no longer the hyped youngster he was four years ago. Instead he now a mature and experienced player who has seen the ups and downs of the game. But before he closes the door on his youth national team career, he wants to help lead the U-23 team get back to the Olympic stage and succeed.
BY Brian Sciaretta Posted
November 21, 2019
5:05 AM
WHEN THE UNITED STATES U-23 team attempts to qualify for the 2020 Olympics in March, one of the key improvements from previous cycles that could be a difference maker is having a roster consisting of experienced players at key positions.

The English-born American central defender recently completed his first U-23 camp of the cycle and is looking forward to potentially having a leadership role on the team as it attempts to qualify for its first Olympics since 2008.

“Definitely, definitely,” Carter-Vickers told ASN about the importance of experience. “That's something we're going to need going into qualifying - and if we qualify, the Olympics. It is definitely very helpful in having players that are experienced. That's not just me. There are other players in this group that have a fair amount of experience. That definitely helps when you go into a tournament to just keep everyone focused and to keep the ship moving.”

His resume speaks for itself and Carter-Vickers is one of the most accomplished U.S. youth internationals of his generation. He was a starting central defender for two U.S. U-20 teams that advanced to the quarterfinals of the U-20 World Cup in 2015 and 2018. He has also been capped by the full national team eight times.

At the club level, Carter-Vickers also has experience that is uncommon for American players short of their 22nd birthday. Still signed to Tottenham, most of Carter-Vickers’ time has been in the Championship where he has played over 6200 minutes with loans to four different teams in England’s second tier. He has also played nearly 1000 minutes in domestic English cups – including four games with Tottenham’s first team.

Between the various U.S. teams and his loans, Carter-Vickers has played for a variety of different coaches and with a wide range of different players.

“Yeah, it is definitely a challenge,” Carter-Vickers said of the journeyman start to his career. “It is something I've gotten more used to as I've been doing it. In terms of getting used to a new group of players and new managers, that's something that I've managed to do quite well and cope with. It's definitely a challenge to go from team to team and try to adjust your style of play to the team and adjust the way you play to what your new manager demands.”

It also hasn’t always been smooth or a straight trajectory upward for him. Carter-Vickers was the starter for the U.S U-23 team in 2015 when he was just 17 and saw that team come up short in qualifying for the Olympics in Rio de Janeiro. He also missed a penalty in a shootout at the end of the 2015 World Cup quarterfinal against eventual champion Serbia which would have seen the team advance had he made it. His loan to Sheffield United in 2017/18 also did not end well and it forced a midseason change from Tottenham to send him on another loan in January to Ipswich.

But the ups have outweighed the downs and the 2019/20 season presents a different challenge for Carter-Vickers. Prior to the season, Stoke City brought in Carter-Vickers for the season on loan. It was expected that a relegation battle would be possible and indeed that has turned out to be the case.

Through 16 games, Stoke City sits second to last in the Championship with just 11 points. It is three points shy of safety. So far, Carter-Vickers has started 10 games but has also missed time due to an injury. But if the team wants to survive and avoid relegation, Carter-Vickers will likely have to play a big role – and this is the first relegation battle of his career.

“The season hasn't really started how we would have liked it,” Carter-Vickers explained. “But there are a lot of barriers in football, you have to kind of breakthrough that barrier and try to get a couple of wins on the bounce and hopefully your season can change from there. The Championship is a very competitive league. Every game is difficult whether you play for a team at the top or a team at the bottom. Every game is difficult. And it's just trying to find that form. It's a difficult league but at the same time, if you hit form or if you hit momentum, you can string together three, four, five wins on the bounce. And that's kind of what we need to do.”

Now looking ahead to 2020, Carter-Vickers is hoping that he will be released to play in Olympic qualifying so that he can help the U.S. team once again get back to a tournament which has historically been important to U.S. Soccer.

The recent camp in Spain saw both ups and downs for the U.S. team which lost to a very powerful Brazil team 1-0 and defeated a very poor Canary Islands select team 4-0. Despite that, Carter-Vickers was impressed with the talent level in the pool which should be improved in March – when domestic players are not in the offseason and many of the other European-based players could progress to the first teams at their clubs.

He is also optimistic that Jason Kreis can get the players ready for the qualifying tournament in Mexico (“He gets it across in a clear way that is easy to understand. I think that's the key to a good coach - getting the message across to the players as simply as he can and then getting them to do it for you.”)

But after years of thriving at the youth levels, this current U-23 team will be the last time Carter-Vickers can play for a youth team at the international level. For him, getting the team to Tokyo is huge challenge as just two teams from the region qualify. But if the team is successful, it will give positive momentum for the program and provide a springboard for many players to make a quick transition to the full team.

Four years ago, Carter-Vickers was one of the most highly regarded young American players but ensuing years have turned him into a veteran who has seen the ups and downs of the game while playing thousands of minutes of first-team soccer. The Olympics now serve as a way to bridge that gap and used that experience to provide important results.

For Carter-Vickers, it would be a great chance to close one chapter on his career and open another.

“It would be great to qualify,” Carter-Vickers said. “The Olympics is obviously a massive sporting event and to be a part of it is definitely great. Growing up as a kid, you watch Olympics every four years when it comes around so it would be great to be part of something like that. It is exciting. There are a lot of young players this week have been doing well and you can clearly see that there is talent here. There are a lot of good technicians and also good athletes.”

“All international youth tournaments are great experiences,” he added. “It's great to be on a stage where you can see where you see where you stand with the top talent in your age group And for me, personally, it definitely helped me a lot. I feel it really improved me as a player, both of the U-20 World Cups I've been to. Anytime you get a call up to the national team, whether it is a full national team or a youth national team, it's an exciting option and that's how I felt this time.”