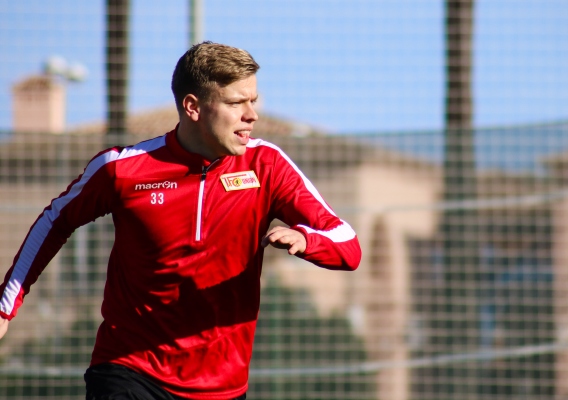 On the rise with Union Berlin, Maloney eyes international future

As one of Union Berlin's prospects, Lennad Maloney,18, has finally broken through to the club's first team over the past month. Now the young Berlin native eyes an international future with either the United States or Germany.
BY Brian Sciaretta Posted
April 22, 2018
11:05 PM
THERE IS A LOT known about many of the top American teenagers currently in Europe. Christian Pulisic is on one of the best trajectories any American players has ever seen. Weston McKennie is breaking through at Schalke and Tim Weah is also getting minutes for Paris St. Germain.

One American not frequently talked about, however, is Lennard Maloney. Born in Berlin to an American father and a German mother, Maloney is now on the first team for Union Berlin. While he has only made one 2. Bundesliga appearance so far, Maloney had been the captain of the club’s U-19 team and is one of its biggest prospects.

Maloney, 18, has a background that is somewhat similar to other German-American players as his father had served in the United States Air Force. While in Kenya, he was taking a commercial flight and met Lennard’s mother who was the flight attendant.

The new couple eventually relocated to Germany and they live there to this day. Growing up, Maloney was connected to his American heritage as his father spoke English to him at home while his mom spoke German, allowing him to be bilingual.

The younger Maloney, however, has only been to the United States twice in his life. Once to his father’s native Florida and another time to Virginia to visit his aunt.

“The last time I was in the United States was four years ago now,” Maloney told ASN from Berlin. I would like to go over to the United States more often but there is not really any time because of school and football. Vacation isn't long and for just one week, it doesn't really make sense to come over right now.”

But in Berlin, Maloney has blossomed into a top footballer. As a very physical central defender, Maloney is dominant in the box where he makes life very difficult for opposing attackers.

“I can play right back also, and central midfield,” Maloney said when asked of his playing style. “But I am the type of player that kills everybody that has the ball and then gives it to another player who can run with it for a long time.”

Currently in ninth place in the 2.Bundesliga with 41 points, Union Berlin sits in the middle of a jam-packed standings where just ten points separate 16th place St. Paul (37 points) in the relegation playoff position and fourth place Jahn Regensburg (47 points).

With so much at stake every game, it is a tough spot for a young player to break into the first team but since second half of the season started after the winter break, Maloney has been a regular on the bench for Union Berlin and made his only first team appearance so far on April 1 when he started in a 2-1 loss to Greuther Furth. In the meantime, he has also been playing for the club’s U-19 team.

“You notice a difference between the U-19 and the first team but I don't really have any problems catching up with the guys physically and how they play,” Maloney explained on his promotion to the first team. “At first I was pretty excited but I am the type of guy who looks at the guys and thinks: normally I see them on television but now I am playing with them. That took a while I grew in but now I am part of the team and everybody has accepted me. Right now, if they need a backup, I'm there. For now, it's all good the way it is.”

“I’ve been with Union Berlin since 2012,” he added. “It's like a big family. It's not like other clubs where everybody is there just because of the money. That is a pretty cool thing about Union Berlin….I would rather say I am a good backup right now. When you are young and new, it's not likely that you're going to be a starting player right away. You gotta know where your place is on the team. I think I am doing a good job but there is still a lot to do to be in the starting XI.”

Maloney’s success at Union Berlin and his reputation as a top central defense prospect also raises questions about his international future. Right now, Maloney is in the picture for Germany where he has now been receiving frequent call-ups.

In early 2017, Maloney was called up and played in friendlies for Germany’s U-18 team. In November, he made his debut with Germany’s U-19 team when he started in a 3-0 win over Cyprus in another friendly. He was also recently called-up again by Germany’s U-19 team for this week’s friendly against Denmark on April 25.

His rise into international football last year was something that took Maloney completely by surprise.

“The first time I got a call, I was sitting with my coach and they said 'Lennard, you are selected to play for the U-18 team and the first game is against Austria,’” Maloney recalled of his first German call-up. “My jaw just dropped to the floor. I was wondering if he was playing with me. I couldn't even realize it until it was over. Now when I see a picture when I was in the starting XI, it is just fantastic. And it is something nobody can take away from me.”

Despite having never played for the United States and having only made a few visits, Maloney feels very connected to the country through his father who has been an important figure in his life. Also, two of his favorite players are American – one in Bobby Wood who used to play at Union Berlin and John Brooks who previously played in Berlin and played the same position as Maloney. Maloney also stresses that he would love to have the opportunity to play against Brooks in Germany, as well.

But both Brooks and Wood are part of one of Maloney’s most prized possessions and perhaps the two will also be future teammates of Maloney at the international level.

“I have a U.S. jersey hanging over my bed with signatures from [Bobby Wood] and John Anthony Brooks who was playing in Berlin at the time for Hertha,” Maloney said.