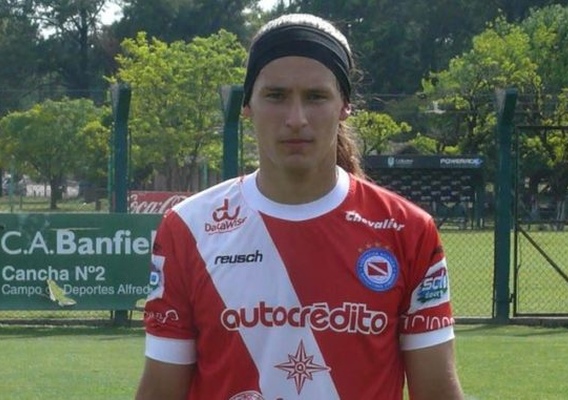 On the rise with Argentinos Juniors, Miljevic discusses international options

The internal conflict that many young dual nationals feel when weighing which country to play for can often be difficult but Argentinos Juniors youth product Matko Miljevic is taking his time with a choice after playing for both Argentina and the Untied States. Brian Sciaretta spoke with the rising prospect.
BY Brian Sciaretta Posted
August 30, 2018
4:00 AM
IN THE MODERN global game, dual national players are common in most national team setups from the youth levels to through the first team. Due to a variety of reasons, many players have grown up living between different countries or have family backgrounds that provide access to multiple passports.

The United States national team and youth teams, of course, have had many players with multinational backgrounds and who have also grown up predominantly outside the United States.

Their stories are all unique. Many were born and raised abroad but had their U.S. citizenship derive from a father in the U.S. military. Some like Aron Johannsson were born in the United States while their parents studied stateside. Cameron Carter-Vickers was born in England but his father lived in Europe while playing professional basketball.

Matko Miljevic, 17, is in a similar situation. He was born in the United States while his family moved to Miami from Argentina due to the economic crisis in their home country around the turn of the millennium. Eventually the family returned to Argentina when Miljevic was still a young child.

Back in Argentina, Miljevic blossomed into a standout soccer player where he plays as a versatile midfielder either based centrally or out on the wing – sometimes playing in an advanced playmaking role.

When was nine, he joined Argentinos Juniors – a once storied club in Argentina that one the Copa Libertadores in 1985 and the Primera Clausura in 2010 but has also struggled at times – suffering relegation in 2014. Currently the first team is back in the Primera but is off to a slow start with just two points from its first three games of the new season.

But Miljevic has progressed steadily through the club’s youth levels and at the start of his eighth season with Argentinos Juniors, he has begun training with the club’s first team this year while playing for its reserve team.

"The truth is that training with the first time is something very wonderful because apart from training with very experienced people in football, like [Leonardo] Pisculichi, [Gaston] Machin and [Raul] Bobadilla, you learn a lot from them and that is something really great,” Miljevic told ASN. “It's another dream fulfilled and hopefully this season can be the year of my dreams, but I am going step by step, each time that I get to train with the first team I'm going to take full advantage of it to learn."

Like most young players in Argentina, Miljevic dreams to eventually impress in the domestic league in order to make a jump to the top European leagues. His grandfather was born in Banja Luka (then in Croatia) and Miljevic is in the process of applying for a Croatian passport to facilitate a potential move in the future.

"The truth is that that is the dream of all players who play in Argentina, to one day play in football's elite,” Miljevic said. “I dream about playing in Europe and wearing the Barcelona shirt."

But for top youth players like Miljevic who have a multinational background, the topic of international soccer often is one of choice. As is only natural, Miljevic is conflicted due to his affinity for Argentina where he was raised, and for the United States where he born and where his parents sought refuge from difficult times. He has not returned to visit the United States but lists it as a goal ("I can't visit my beautiful country because of the issue of not having much free time, but the truth is that I would like too.")

Last year, Miljevic played for the United States U-16 team at the International Tournament of Montaigu and assisted in a 3-0 win over Mexico. According to players at that tournament which ASN spoke with, Miljevic played well.

But this year, Miljevic is playing for Argentina and is currently in Uruguay in preparation for a match with Argentina’s U-20 team. He admits that it has been a goal of his to play with either national team.

"Everything is going well right now,” Miljevic said. “We're in Uruguay training with the national team to play against the home side (Uruguay). The truth is that when I found out [I was called up by Argentina] it was something really wonderful for me and my family. It was something I dreamed about as a little boy. Equally, the U.S. call-up was something I always dreamed about."

Despite currently playing for Argentina, Miljevic points out that he is still very open to playing for the United States again. Born in 2001, there is a lot of youth soccer ahead of him as he is age eligible to play at the 2021 U-20 World Cup or even the 2024 U-23 Olympic team.

The reasons for conflicting emotions are obvious and Miljevic would not be the first American to feel compelled to play for different youth national teams before deciding. Current national team players Lynden Gooch, Julian Green, and John Brooks are the most obvious examples. Of course there are even more examples of dual nationals, like Shawn and Devante Parker, who were courted by two countries and and ended up out of favor with both.

But if the United States is where Miljevic ultimately plays, a large part will be due to the strong impression his first experience was for him last year with the U-16 team. He is also intrigued by the next generation of American players and frequently makes efforts to tune into Borussia Dortmund games on television to watch Christian Pulisic.

"The experience with the United States national team was very good,” Miljevic recalled. “The truth is that I felt very comfortable by the treatment and with the boys. It was not too difficult to fit into the team since all the players from there have the same quality of play as mine."

"As I tell everyone, I like the two national teams because I was born there and I grew up here but I always say that the same thing that the first one that calls me up [to the senior team], that's the one I'm going to."