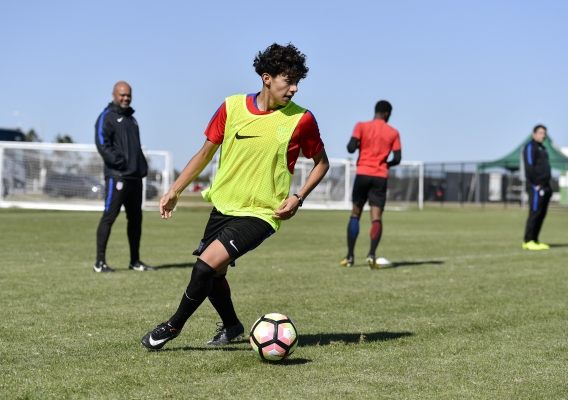 Now at PSV, U.S. U-20 mid Richard Ledezma eager for breakout in Holland

Both domestically and abroad, 2019 could be a big year for several promising young American players. ASN's Brian Sciaretta spoke with U.S. U-20 midfielder about joining PSV Eindhoven and the upcoming U-20 World Cup in Poland.
BY Brian Sciaretta Posted
January 23, 2019
4:00 AM
THERE IS NO question that the Dutch clubs are keen on development with many players using the Eredivisie as a springboard to eventually move to bigger leagues. For young American players who have been able to play in Holland, the results have been pretty good.

In the modern-era, DaMarcus Beasley, Cory Gibbs, Jozy Altidore, Matt Miazga, and even the injury-plagued John O’Brien have all enjoyed success in the top Dutch flight. But the league’s latest American, Richard Ledezma, will be an interesting case for a variety of reason.

For one, Ledezma, 18, is moving to Holland at PSV Eindhoven on his first professional contract and he will not be there on loan. He’s also a classical No. 8 midfielder, which is a strong point of a league that emphasizes possession. He is widely considered to be a top American prospect with a chance of being a starter at the U-20 World Cup this June. Finally, he is in a position where one of the top teams in the country is heavily invested in his development as league rules mandate non-EU citizens have a high minimum salary – to ensure only top non-European players take up roster spots.

The Arizona native has been sidelined since his fall trial due to a foot injury, which also forced him out of the U.S. U-20 team for its CONCACAF Championship run. But Real Salt Lake academy product flew to the Netherlands shortly after Christmas and over the past weekend was medically cleared to play.

“It's going well,” Ledezma told ASN from Holland. “I started out with light jogging but every day it has gotten harder. I've been hitting the gym and working hard to get my fitness back up because of the injury.. They spoke with me, with the academy director, he said I should be seeing games with the U-19s and then if I am doing well, I could see games for Jong PSV. They told me to focus more on next season [for the first team]. That should be fun…[The style here] is different. They go in hard. They are playing because it's their job. They like to possess and go forward, shoot.”

“I like it here,” he added. “I think it was just how they welcomed me during my trial. I know they like playing young players. I see a lot of the players that come out of PSV. I believe I am the second American ever here after DaMarcus Beasely. It's exciting. I am just trying to get used it. It's a different country and culture. Everything is different like the food, and the houses. I am from Arizona so it's freezing for me. I am still getting used to the cold. But when I came to PSV, I really felt at home. They did a lot for me like finding me a home and getting me a car. They even brought my dad over.”

In addition to a big year at the club level where he is getting settled into international soccer, it is also shaping up to be a big year for Ledezma internationally. The upcoming U-20 World Cup in Poland will be a big stage for a bunch of American players – with Ledezma being one of the more highly regarded players in the player pool.

But the current U.S. U-20 team could make a deep run in Poland and Ledezma knows it will be a tough team to make. Like many, he watched the team run away with the CONCACAF title with a dominating performance that ended with a 2-0 win over Mexico in the final.

It was an impressive display in the final as the U.S. team downed its archrivals in Mexico and Ledezma is one of several players in the current pool that comes from Mexican heritage with both of his parents having been born in Mexico.

Regarding his international future, Ledezma is non-committal saying that “we will see when it comes down to the moment” but then indicates that he has not heard from the Mexican federation and “just the U.S. so far.”

That being said, Ledezma is very attached to the current U.S. U-20 team and notes that he is close with head coach Tab Ramos who texted him before he left for Holland to offer up his congratulations and encouragement.

Regarding the players, he even recalls a story about meeting Alex Mendez for the first time two years ago when the two were on opposing teams and had a scuffle after both went in for a 50-50 challenge. Now the two are friends. He even recalls how he recently went to watch Sergino Dest play for Jong Ajax at a recent game in the Dutch second tier.

“It's a team that I felt I was part of,” Ledezma said of watching the U.S. U-20 team on television win CONCACAF. “They're all my friends, my brothers, and my family. Of course I was going to watch them. I was pretty proud of what they did. I know it wasn't easy. At the World Cup, if we get the right guys to do the job, then I am happy. It's up to Tab, not me, and he has to build the team. He is not going to take the entire team from CONCACAF again but maybe he could. If people come in too cocky, thinking they already made it, and don't have the mentality to go, then being on the CONCACAF roster doesn't mean you are going to go to the World Cup. You have to work for it. I have to work for my spot. They can bring in Tim Weah or Tyler Adams. Look at where Tim is at.”

Like many American fans, Ledezma is excited by the next generation of American players–even with the increased competition making it harder to earn call-ups and roster spots. But many players within the team seemed poised to breakout with clubs both domestically and abroad and Ledezma is excited to be part of group of players looking to raise the bar for American soccer.

“I am seeing a lot of players who impressed me like Paxton Pomykal, Brandon Servania - Frankie Amaya killed it, then of course Alex Mendez,” Ledezma explained. “ I don't know, but we're coming in hot.”