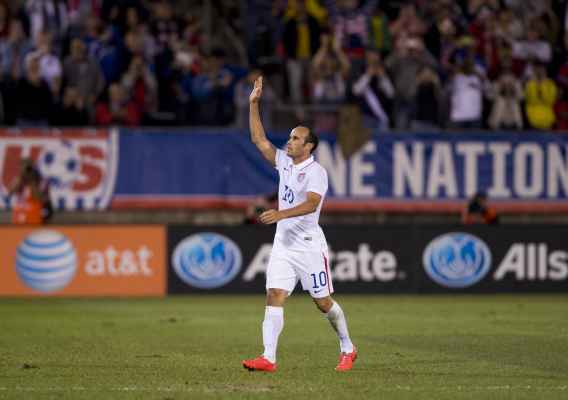 Now at Leon, Donovan Searching for a Positive End To His Career

American fans were shocked last week when Donovan announced his comeback with Club Leon. There are plenty or reasons to be pessiistic over this move. Is Leon simply making a PR stunt? Is Donovan trying to make a political statement? Is it a cash grab? But the optimist in all of us is hoping he can finally end his career on a positive note.
BY Brian Sciaretta Posted
January 19, 2018
9:55 AM
AS OF NOW, nobody knows how Landon Donovan’s surprising move to Club León will go. The former United States national team great has been retired since 2014 with the exception of a brief 2016 comeback to help a struggling LA Galaxy.

It is certainly easy to be pessimistic. Soccer is a game where a player can ill-afford to take long layoffs and remain playing at a high level. Now Donovan is joining a Liga MX team that has six points from its first two games after a seventh-place finish in the 2017 Apertura.

Donovan, 35, made the shocking announcement last week that he was coming out of retirement because of a strong desire to play in Mexico. He also made a political statement that he didn’t believe in walls and that he really liked the city of León. Not surprisingly, reports then started to surface that Donovan’s salary was an astronomical $185,000 a month.

Then you have Club León marketing Donovan’s comeback with the intensity typically reserved for first-rate players in the middle of their prime, not players whose ability to contribute seems so uncertain. Donovan’s return to the game might not be a publicity stunt or a gimmick, but León is treating it like one.

Combined with the political statements, the extraordinary PR, the salary, and Donovan’s historical fame in the U.S./Mexico rivalry, it was a beautiful way for León to earn headlines typically reserved for Mexican teams like Club America, Monterrey, Tigres, or Chivas.

If this move goes well and Donovan successfully contributes on the field, it would be an unbelievable story. To shine for a very good team after such a long layoff would be surprising and remarkable.

But it would add to his lure. He is the best player ever for the United States national team. Christian Pulisic might catch him but he has a long way to go. Even Clint Dempsey might get another cap to pass Donovan’s 57 goals but what made Donovan so special wasn’t the goals, it was the 56 assists and his overall contribution.

When you watch Donovan’s performance from 2007 through 2010 for the national team, it was unbelievable. When he wasn’t scoring, he was making everyone on the U.S. team look good. He instinctively knew where to make runs to put himself in dangerous positions. He moved very well and he had great awareness as to where his teammates were at all times.

And at the international level, Donovan performed well against great opponents such as Italy and Brazil. But of course, he always seemed to save his best for Mexico and that is going right to the heart of this comeback.

The end of Donovan’s career was unfortunate and he deserved far better than he received. He battled depression which forced him to take a sabbatical. When he returned, he was terrific in leading the U.S. to the 2013 Gold Cup title while also performing well at the end of the Hexagonal (scoring in yet another Dos a Cero win in Columbus).

But head coach Jurgen Klinsmann’s infamous decision to cut Donovan from the 2014 World Cup team essentially ended his career. Not even a final goodbye cap, winning MLS Cup at the end of 2014, or the brief 2016 comeback would remove the lasting impact of Klinsmann’s decision.

Donovan essentially retired too young and has seemed to be unsure of what he wanted to do next. He’s travelled. He’s done some announcing. He spent time with youth teams (coaching the homegrown game, mentoring the 2015 U-20 World Cup team in New Zealand, etc.). Failure at León would continue the unfortunate spiral at the end of his career.

It would be an amazing accomplishment and a truly uplifting story if Donovan cuts through the pessimism and is a success on the field for León. The most historically important American player ever could finally find a way to end his career on a high note. For those looking for optimism, Donovan always was an extremely smart player. Of course he is rustier, slower, and weaker than years ago. But if he can use his intelligence to adapt and still read the game well, perhaps he can be useful.

All American fans can do right now is hope for the best because there is so much we don’t know about what Donovan is actually capable of on the field at this point in his life. The fans who cheered him on when he was at his best hope this isn’t a political stunt, a cash grab, or a way for León to make headlines.

It has been five years since depression forced Donovan into a sabbatical and nearly four years since he was cut from the national team. No one wants that to be final chapter. It’s an uphill battle for Donovan to have a great last chapter of his career in León and it might be insurmountable.

But at least it is an opportunity, and many are hoping it materializes.