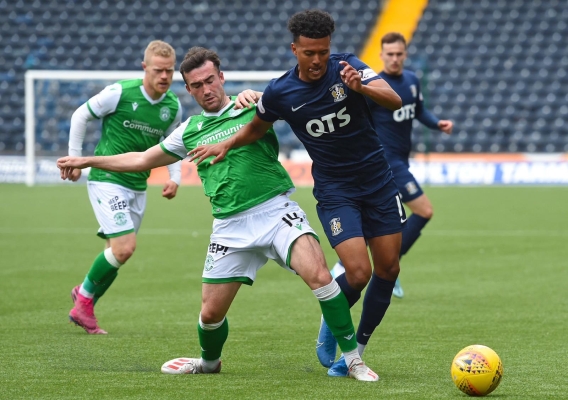 For the past few years, Hamalainen has sought out a professional club where he could be a professional starter. Signed to Queens Park Rangers, he is now on his third loan spell with previous stints at Dagenham & Redbridge (which was only a one-month loan), Los Angeles FC, and now Kilmarnock.


@spfl Team of the Week for @Niko_Hamalainen ?
Start for @GilesPhillips22 ?
Minutes for Aramide Oteh ?

Read about a busy midweek for our Loan Rangers ????

“Since I made my debut awhile ago, I literally just have been wanting to play first team football, week-in week-out,” Hamalainen told ASN from Scotland. “That's kind of what the aim of being a professional soccer player is. And obviously getting the opportunity to come over to Kilmarnock, a Scottish Premier League team, who finish third last year is a good opportunity for me to show everyone what I can do.”

The transition from youth soccer to first-team soccer was a challenge, and it was a process that forced him to mature quickly.

“First-team footballers, they're playing for their kids, they're paying for bonuses, for mortgages on houses and having food for their families and all that type of stuff,” Hamalainen explained. “So it is much more demanding for especially for a new player coming in. You have to make sure you on it all the time in training, which obviously makes it easier to be on it in games. But it is quite a difference from games that, I wouldn't say mean nothing - like U-23 games - but they're not like bonuses on the line for families or stuff.”

Blessed to have received Man Of The Match on my full debut, disappointed not to get all 3 points but we again next weekend ??????
To God Be The Glory pic.twitter.com/ne683LxZ4G

But success for Hamalainen, 22, has forced him to make important decisions. Born and raised in South Florida, Hamalainen is a dual national with Finland where his father is from. And Hamalainen has been a regular with Finland’s youth national teams ever since he signed for QPR in 2014. Earlier this year, he made his debut for Finland’s full national team in a non-binding friendly.

But in September, Hamalainen received a call-up to play in a camp with the U.S. U-23 team. The camp went well and he says he and his agent have been in touch with head coach Jason Kreis since then. But for him, there is a lot to think about in terms of making a permanent decision which country to represent.

“I haven't been called up to play for USA before,” Hamalainen said. “And obviously I still have the privilege of being able to, I guess, see both national teams before I make it make my final decision. I think they were interested in calling me up before, but obviously I was playing with Finland. Now [Finland doesn’t] have U-23s or anything, it's just the senior team for me. I didn't want to make a decision to play for Finland or USA yet until I was playing first-team football somewhere club-wise. They contacted my agent and I got the opportunity to head out to San Diego for the camp. The camp was very good. I know a couple of players from before. It was good overall feeling.”

As for when he intends to make a decision, Hamalainen has no intention of letting it drag out. Both nations have important tournaments they are preparing for. If he does select the United States, he will need to get into camps soon to compete with a surprisingly decent crop of U-23 left backs which include Antonee Robinson, Chris Gloster, Sam Vines, and perhaps even Sergino Dest down the line.

The decision is tough for Hamalainen because his ties to both countries are very strong. He grew up in South Florida and had the opportunity to play at the youth levels with the New York Red Bulls and FC Dallas. When he was recruited to play for Dallas, he learned to live alone and how to adapt to focusing on soccer.

He even had the opportunity to play for Los Angeles FC on a sixth month loan and experience a professional level and a winning mentality which he compares favorably with Europe (“I just remember always being there literally every week and the mentality was definitely: we're going to win every week. Even though didn't really play as many games but just being around that in training and stuff, you get just a sense of this is how your mentality needs to be in training. it was great, great experience going out to LAFC.”)

But on the other hand, Finland is also important to him. His Finish father was a professional player in Finland’s top flight and is one of the most important influences in his life. Growing up, the would wake up and watch English Premier League games together on television from Florida and that left the younger Hamalainen with the inspiration to try to make it to that level when he grew up. And of course, Finland was the first team to call him up to their youth levels for the U-18 national team.

His roots in the game are multifaceted in how he is a product of the American development system that was aided and inspired by his father’s European roots. It was also former West Ham midfielder Ian Bishop, who also played with the Miami Fusion towards the end of his career and is a family friend, who helped arrange trials in England for Hamalainen that eventually resulted in the QPR deal. He was actually noticed by QPR while on trial at Everton.

So it has been a winding path from Florida to Scotland but Hamalainen is finally realizing his dreams as first-team player where his is having positive contributions to Kilmarnock on a weekly basis.

So as for where his national team ambitions lie, he’s not ready to say - yet.

“I am still thinking about it,” Hamalainen admitted. “It is difficult. It's a tough decision to make.”