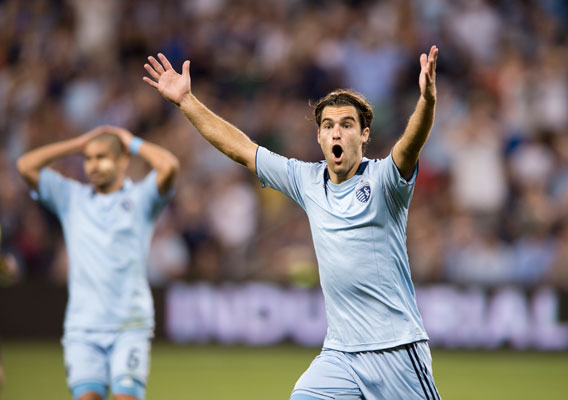 We take the "Now" part of American Soccer Now very seriously, which is why we update our ASN 100 rankings every month. Here's a quick analysis of our November rankings.
BY John Godfrey Posted
November 01, 2012
8:04 AM
Our interactive ASN 100 rankings are built to be user friendly. Just click around the interactive list and good things happen—the visual rankings reassemble based on 13 different filters, player images expand to reveal key data and profiles, and these profiles are loaded with embedded videos and recommended reads.Want to compare the current ASN 100 with previous rankings? You can do that—just click on the "Rank" filter and a drop-down menu will let you look at past rankings. We've also added some new data to our "Caps" filter, so be sure to check it out. And as of November 1, the list is entirely new. Our 10-person ASN 100 Editorial Panel—including Jimmy Conrad, Alexi Lalas, Brian Sciaretta, and Grant Wahl—each ranked the best American soccer players from 1-100. We tabulated the results, updated the list, and have the results available for you here. We will be interviewing some of the individual Panelists throughout the month, but in the meantime here is a quick look at some of the movers and shakers within the November ASN 100.Dempsey Holds Off Bradley
In our October ASN 100, Clint Dempsey was the clear No. 1, finishing first in nine of 10 ballots. In November, it was a much tighter race. Whether motivated by Bradley's inspiring performances for the U.S. national team or disappointed with Dempsey's effort against Antigua & Barbuda, Panelists were split on who should put the "1" in ASN 100. In the end, Dempsey won by one point. Will he hold on to the title in December? Stay tuned.EJ Moves Up 24 Spots
As we all know, the U.S. won its World Cup semifinal qualifying group, is moving on to the Hex, and everything is well in USMNT-land. But things could have been so different if Eddie Johnson hadn't risen above the muck and headed in two key goals to help the U.S. defeat A&B 2-1. Playing out on the wing, a joyful and fearless Johnson made Jurgen Klinsmann look like a genius for 1) putting Johnson on the roster; 2) starting him; and 3) playing him out wide. ASN 100 Panelists took note, and EJ moved from No. 38 on our inaugural ranking all the way to No. 14. Great story.Zusi Up, Torres Down
In October, our Panelists ranked playmaking midfielders Graham Zusi (No. 17) and Jose Torres (No. 18) as virtual equals. One month, and two World Cup qualifiers later, Zusi is now ranked 10th and Torres has dropped to 24th. Given the Sporting Kansas City midfielder's influential work in recent months, it's hard to argue with his rise. As for Torres? He has squandered several opportunities, and now appears to be on the outside looking in. Things can change quickly, however, as our rankings indicate.Donovan Drops to No. 5
Los Angeles Galaxy attacker Landon Donovan fell one spot, from fourth to fifth, between October and November. This may be due to the fact that he missed the last two World Cup qualifiers and/or because the man who passed him, Steve Cherundolo, has played so well in recent weeks. But given his health woes and recent comments about his uncertainty about the 2014 World Cup, will Donovan drop even farther next month? Wouldn't be the least bit shocking.Gordon Moves from 82nd to 48th
Nobody raised his ASN 100 profile more than San Jose Earthquakes striker Alan Gordon. When Klinsmann announced that the MLS journeyman was on his World Cup qualifying roster, some pundits scoffed. But Gordon has been consistently dangerous for the 'Quakes all season, and his deft 90th-minute cross set up Eddie Johnson's all-important goal against A&B. He deserves the plaudits, and with a good showing in the MLS Playoffs, Gordon could continue his ascent. New names on the ASN 100:
John Anthony Brooks (No. 85); Austin Berry (No. 90); Bryan Gerzicich (No. 94); Benji Joya (No. 95); Greg Garza (No. 96); and Michael Farfan (No. 98). Here are a few more noteworthy movers and shakers within the November ASN 100.Danny Williams rises from 10th to 7th.Carlos Bocanegra drops from 9th to 12th.Michael Parkhurst rises from 22nd to 13thSasha Kljestan moves up 12 spots to No. 15.Aron Johannsson goes from No. 70 to No. 57. What do you think of these updated rankings? Agree? Disagree? We created the ASN 100 to spark conversation, so please chime in the Comments section below. And be sure to play around with the filters—they take the experience to a new level.