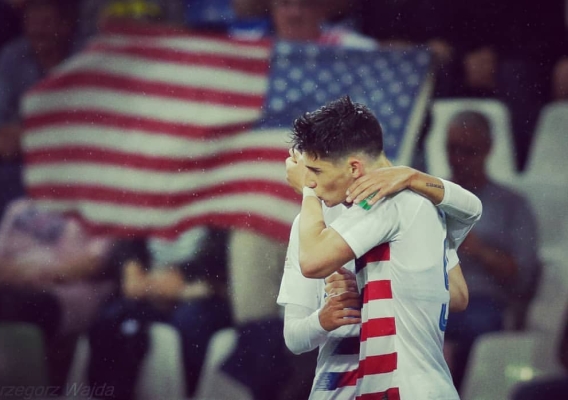 News and Notes on the U.S. U-20s and USMNT camps

There is plenty of news surrounding the various U.S. national teams right now with a hybrid USMNT/U-23 camp underway in Maryland and the U-20 World Cup ongoing in Poland. ASN looks at the top stories
BY Brian Sciaretta Posted
May 28, 2019
5:00 PM
UNITED STATES national teams are taking center stage at the moment as the U-20 World Cup is in full swing, the pre-Gold Cup training camp is underway in Annapolis, and the U.S. women’s team is preparing to set up camp in France for the World Cup.

With all of that said, there are plenty of news to report.


The U.S. team has one more game left in group play and that will take place on Thursday against Qatar. The U.S. team has three points after a win over Nigeria and Thursday’s results will likely determine where it will finish in the group.

A loss could eliminate the United States from the tournament. A draw will send them through as either the second or third place team. A win could give them the group title – while also having the possibility of a second or third place finish. The outcome will be determined by the result of the Nigeria – Ukraine game as well as goal differential. The U.S can win the group if Nigeria beats Ukraine and the U.S. team finishes with a goal differential higher than Nigeria.

Regardless, a second-place finish in Group D is a decent possibility for the United States and that would pit it against tournament favorites France in the round of 16.

So a tricky road awaits Ramos and the U.S. team but the team received a bit of favorable news regarding two of its players who had injury concerns following Monday’s 2-0 win over Nigeria. Central defender Chris Richards was forced out of the game in the 60th minute and reports suggest that he might miss the Qatar game but be back in time for the knockouts.


Report: U.S U-20 defender Chris Richards might only miss 2-3 days as well as the Qatar game but be ready for the knockout stages if the U.S team makes it https://t.co/y9MWiNZ2uC

Also, attacking midfielder Alex Mendez also tweeted that he is okay after he was seen limping post game.


American midfielder Duane Holmes was not up to fitness in his return from injury to play for Derby County in the promotional playoff final vs. Aston Villa on Monday. In the end, Derby lost 2-1 and will remain in the Championship

But Holmes, 24, was still part of the U.S. national team’s pre-Gold Cup camp and traveled to the United States on Tuesday to take part in the camp. For Holmes, this is his first ever international call-up at any level. It remains to be seen, however, if he will make the Gold Cup team.


The pre-Gold Cup camp is a hybrid USMNT/U-23 camp and while some players are very experienced at the international level, most are not.


Glad to have this guest observer at #USMNT training today... ???? pic.twitter.com/IRNpQETIzM

Berhalter and Donovan were teammates on both the 2002 and 2006 World Cup teams.

“It’s a good opportunity for us to begin integrating some of the younger players into the full National Team and for the coaching staff to get a good look at them and really start ingraining the style of play with both groups,” Berhalter said about the camp on Monday.

Also joining the team for Tuesday’s practice was U.S. U-17 international Bryang Kayo.