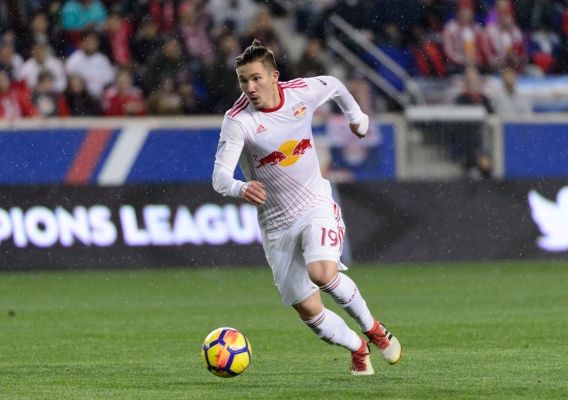 It was a great weekend for three of the original teams of MLS as the Galaxy, DC United, and RBNY all had impressive wins. In positive news for the league and its fans, young players are off to a strong start this season. The bad news comes from the league's defending finalists which look woeful
BY Brian Sciaretta Posted
March 18, 2019
3:00 PM
THE THIRD WEEKEND of the MLS season is in the books and it was another terrible weekend for the 2018 MLS Cup finalists as both Portland and Atlanta continue to look likes shells of their former selves. The winners of the weekend, however, were the league’s young players, FC Cincinnati, and the New York Red Bulls.


Alex Muyl is an underrated player. The same can be said for Sean Davis, Daniel Royer, Marc Rzatknowski or a lot of the Red Bull players who run so well within a system. Muyl is a workhorse who is crafty and reads the game well.

On Saturday in a 4-1 win over San Jose, Muyl was an early first half sub and scored two goals to help the Red Bulls overcome a 1-0 deficit and turn it into a 4-1 laugher.


Portland is off to an awful start and the team is absolutely bleeding goals and the team looks in poor shape at the moment after a 3-0 drubbing at the hands of Cincinnati over the weekend.

Right now, the team’s backline is shaky, at best, and the defensive midfield options with Cristhian Paredes and Bill Tuiloma are just getting overrun. Meanwhile, Diego Valeri is another year older. What is baffling is that the team seems to want to buy a striker. Which wouldn’t fix any of their problems.

Portland is not a pretty place at the moment. Its academy hasn’t produced anyone. It doesn’t play many young players or even Americans (or Canadians). Portland has had remarkable success getting hot at the right time but it seems to always be walking a fine line of falling into the league’s doldrums. Perhaps this year is a wake-up call.

The San Jose Earthquakes give their thanks for not being at the bottom of at least one category. (The last-place Quakes' goal differential is -7. Portland's is -6.) #RCTID https://t.co/7vFsGhusUY

Meanwhile Atlanta continues to be a mess and it’s at the point where the team is struggling to beat average teams at home. Frank de Boer made the gaffe of calling Atlanta fans spoiled for the club’s success early in its foundation. In once sense he’s right in that there are a lot of teams that have been around since the league’s founding that have never achieved what Atlanta has.

In another sense, Atlanta has the talent to be a dynasty and it is frustrating to see a team squander that opportunity. The hiring of de Boer is still odd because it goes into a completely different direction from what made that team so great. Tata Martino was always going to leave after this season but hiring someone in his mold would have probably made more sense. There is no sense in reinventing the wheel.


In an era where many teams in MLS spend money on attacking talent, the New York Red Bulls spend it on defense. The result is that the team has a formula where it can run on autopilot for most of the regular season.

The team can easily withstand the losses of players like Dax McCarty, Sacha Kljestan, and Tyler Adams and still be among the best in the Eastern Conference. On Saturday, Chris Armas benched Kaku and it didn’t even matter as the Red Bulls cruised past San Jose 4-1. Bradley Wright-Phillips scored a goal but even if he goes cold for a stretch, the team is fine.

Right now, the Red Bulls have the best central defense tandem in the league with Tim Parker and Aaron Long. Michael Murillo is known to make gaffes but he too knows how to play in this league well. The defensive midfielder tandem of Marc Rzatknowski and Sean Davis is also experienced. When Kemar Lawrence returns, it will add yet another key piece.

MLS teams would be far wiser to invest in defense. It would produce longer and more sustained success in the league.

A good week for young players


The number of younger players getting minutes in the league early in the 2019 season is welcome news.

Here is an interesting stat


More teenagers have now played in MLS this season than La Liga, Premier League, & Serie A. 4 debuts this week.

Most of the league’s teenagers right now are domestic and it is impressive that just about all the domestic options for the United States U-20 team are playing minutes in MLS. When you look at the team’s core that play in MLS, it’s far different than in previous U-20 cycles.

Chris Durkin, Mark McKenzie (hasn’t played in 2019 but played 2000 minutes in 2018), Paxton Pomykal, Ayo Akinola, Justin Rennicks, Jaylin Lindsey and Jesus Ferreira (if he gets citizenship) have all been playing to start the year.

In fact, this year players who are on the outside of the team looking in are also getting minutes. Most impressively have been James Sands, Brenden Aaronson, and Omir Fernandez. Sands has been a regular starter for NYCFC. Fernandez scored against Santos Laguna in the Champions League midweek but Aaronson turned in an eye-opening performance for Philadelphia in its 1-1 draw away at Atlanta.

Aaronson, 18, earned the start with Marco Fabian suspended due to a red card. It didn’t take long for Aaronson to put Philadelphia up 1-0 on a deflected shot. Aaronson was in fine form throughout.

James Sands, 18, is also making a name for himself as a regular starter for New York City in defensive midfield. On Sunday, he went the distance again in a 2-2 draw against one of the best teams in the league in Los Angeles FC.

Finally, Ayo Akinola scored the first goal of his career and assisted on a winner on Sunday for Toronto FC. The U.S. U-20 attacker showed a lot of promise in his outing and his first goal was skillful.


United States U-20 attacker Ayo Akinola scores his first professional goal for Toronto tonight vs New England to even the score at 1-1 https://t.co/LXUVZPmyrb


The best two teams of the weekend, by far, were DC United and the LA Galaxy who each turned in eye-opening performances.

What is great about DC United is that they have a lot of balance. The designated players in Wayne Rooney and Luciano Acosta make sense. There is a midfield trio that has a lot of chemistry and the backline is also strong.


Sebastian Lletget was Man of the Match:

For the LA Galaxy, the team made a statement in a rebound after a road loss to FC Dallas. Minnesota was off to a strong start this year but the Galaxy were just better. The addition of Joe Corona has been much better than expected and Sebastian Lletget is playing a true national team caliber player. The result is that this team can beat good teams even without Zlatan. It’s a huge improvement from last year and the Galaxy should be a higher seed playoff team in the Western Conference.