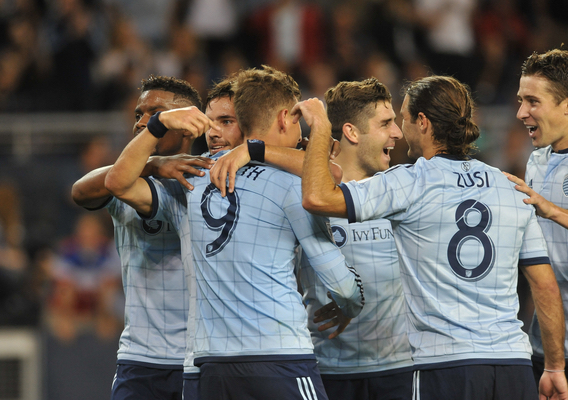 Predicting MLS is hard but ASN is going to give it a shot. For the second straight year, ASN's Isaac Heath is going to predict the upcoming season for the Western Conference. With the season opening in just a few days, SKC looks like the team to beat while other familiar faces will be in hot pursuit.
BY Isaac Heath Posted
February 25, 2019
4:00 PM
THE 2019 MLS season kicks off in less than two weeks, although it hardly feels like it should be here. Perhaps it is the harsh winter that much of the US has experienced these last few months, but as I type this Toronto FC trails Independiente from Panama 4-0 in a CCL match, so maybe I am not the only one ill prepared for the season.

Last year was my first previewing the Western Conference for ASN and I must say I am rather proud that I picked 5 of the 6 playoff teams correctly. My one error was a pretty bad one though as I picked Vancouver to finish second. This brag all but guarantees I will revert back to the mean in picking MLS and go 0-7 for 2019. After all, with all of the parity in the league along with so much that can happen in a season, it isn't quite like picking the top 2 teams in La Liga.

Given the single entity set up that is MLS, my process for picking winners is pretty simple really. Continuity, smart player signings, a strong academy, and the right culture. Several teams in the league can check one or two of those boxes, but few are able to check 3-4. Those that do find themselves playing into late fall/early winter.


When I think of continuity and building a strong culture, Sporting KC comes to mind as one of the best. While it is true that they haven't had much playoff success since winning it all 6 years ago, there is something to be said for what Peter Vermes and Co have built over in Kansas City.

The departure of Ike Opara is big, but beyond that loss, the strong core of players like Besler, Epinoza and Zusi should be enough to give Sporting KC fans something to cheer about come playoff time once again.

If youngster Gianluca Busio can improve upon his strong 2018 campaign he should be able to add a spark offensively for the club as well.


Seattle got off to a brutal start in 2018, but roared through the second half of the season and into the playoffs before falling to the Timbers in the semifinals.

They lost Jordan Morris last year during the preseason to an ACL injury, but the young US International is back and now looks to team up with Raul Ruidiaz. The Peruvian proved to be a spectacular signing for the Sounders and the club is excited to see how good they can be having him for a full season.

While veteran Ozzie Alonso is gone now, they still have a solid nucleus in the midfield and should not skip a beat in 2019. If they can stay healthy, Seattle certainly looks to be a team that could make a run at another MLS Cup.


Bob Bradley and expansion side LAFC had an extremely successful MLS debut season as they made it to the playoffs before falling in the first round. For a while it looked as if they could make a run in the playoffs, but their defensive struggles caught up with them.

With a potent offense highlighted by Carlos Vela and Diego Rossi, LAFC should be a strong team once again. They brought in Eddie Segura and Mohamed El-Munir in hopes to shore up the defense and with an experienced coach like Bradley at the helm, sophomore success seems likely.

One thing for certain is with Zlatan back with the Galaxy, we should get some more entertaining rivalry matches.

The Timbers started extremely slow last year causing this writer and many others to doubt new head coach Giovanni Savarese. However, they were able to turn it around and get hot just in time for the playoffs and make their second final in four years.

Not a ton has changed for the Timbers from a personnel standpoint thus far, so the continuity should help Savarese continue to mold an already strong team to his liking.

I say it a lot, but for me MLS signings don't get much better than Diego Valeri. As he goes the Portland will go, and Valeri should still have a few strong years left in the tank to give. With speedy players like Jeremy Ebobisse around, Valeri's passing ability can be maximized, which is what makes Portland so tough when they are clicking.

If they start slow at all again I wouldn't be surprised to see them make some big signings. Regardless, expect them to be a force to be reckoned with in the postseason yet again.


When Zlatan Ibrahimovic took out an ad in the LA Times to say "you're welcome" to Galaxy fans for coming to LA, count me as one who was skeptical of success. Several of my non-soccer fan friends all texted me about how big a signing it was but I scoffed at the idea he had much left in the tank.

I can confirm that I was wrong about Zlatan. The Swede still has plenty left in the tank and brought a much needed spark to the Galaxy last year. The team still struggled with consistency, but without their disaster of a last game they would have made the playoffs.

The Galaxy's main objectives were to have Zlatan return and hire a competent new coach. That was accomplished when Guillermo Barros Schelotto was hired to replace Dominic Kinnear. Aside from that, however, they only made a few other moves for 2019. Young Mexican International Uriel Antuna could be an interesting addition in the midfield for the Galaxy as well as the return of Juninho.

The expectations will be high for the team this year and anything less than a playoff run will be a huge disappointment.


Real Salt Lake seemed to be on the outside looking in of the playoff picture until the LA Galaxy imploded in the second half of the last game of the season and just like that, Mike Petke's men were in. Once in, they made the most of it by shocking LAFC on the road before bowing out.

The 2018 RSL team relied heavily on youth combined with a few solid core veterans like Kyle Beckerman and Nick Rimando. They appear to be set to continue the youth movement this year as they signed 5 homegrown players in the offseason.

They also added a new DP in Sam Johnson out of Norway as well as Everton Luiz on loan. Those two should help, and if their young core can improve on last year, they have a great shot to be back in the playoffs this year.


After an up and down 2018, the young FC Dallas team still managed to make the playoffs. However, following a disappointing home loss in the first round Oscar Pareja and the club parted ways and a new staff was brought in.

Player changes came quickly after that with Tesho Akindele, Maxi Urruti, and Victor Ulloa getting traded and a slew of signings coming thereafter.

Despite the changes and losing a successful coach, the club has reason to believe it can continue its success with an in house hire in former Academy Director Luchi Gonzalez.

After all, Gonzalez has headed up what is widely known as the best Academy program in MLS. During his tenure 15 Homegrown players were signed by FC Dallas, with players like Kellyn Acosta and Reggie Cannon seeing time with the US National Team.

Like 2018, there could be some ups and downs for this team, but their youth has another year under its belt so making the playoffs is a still a reasonable goal.

The good news for Minnesota United fans is that given how bad the first two years have been, the only way for the team is up.

They took a big step to shore up their defense when they acquired Ike Opara in a trade from Sporting KC. Jan Gregus from Denmark and veteran midfielder Osvaldo Alonso should be able to contribute right away and support 2018 bright spot Darwin Quintero.

While they likely will be more competitive, they still have a long way to go. However, if things go well for them they could have a chance to challenge for one of the last few playoff spots.

Despite a mostly disappointing 2018 season for Wilmer Cabrera and the Houston Dynamo, they were able to win the US Open Cup as a consolation prize.

After making the playoffs two years ago there were high hopes that trend would continue, but Houston struggled mightily on the defensive end all season long.

They brought in a few reinforcements defensively, but Cabrera will have his work cut out for him as they compete in the Concacaf Champions League in addition to playing in MLS.

With the added playoff spot the team certainly should be able to make a push to make it provided they stay healthy and defend better.

There won't be a more difficult team to predict this year than the Vancouver Whitecaps. Add to the fact that I got them so wrong last year, one could say confidence is not brimming with this prediction.

Vancouver basically gutted their entire roster in the offseason as the team was built with Carl Robinson's counter attacking style in mind. From that standpoint, the rebuild is understandable, but I can't say i have ever seen a team make as many drastic changes as Vancouver has.

While they fail the continuity test for me, a rebuild isn't the worst thing and it could be a year of pleasant surprises for the club. I don't think one of those surprises will be a playoff berth though.


There was not much to cheer about in 2018 for Rapids fans as the team languished near the bottom all year. There were issues all over the field, but the biggest issue was the lack of potency on offense.

In many ways the expectations were not high as it was the first year with a new coach, but this year with Tim Howard playing his final season, there will be a strong desire to end his career with some success.

The Rapids made several offseason signings to help that, sticking with several veterans. To help up top they added Kei Kamara and Diego Rubin in hopes they can bring much needed scoring. Benny Feilhaber should also bring in a nice veteran presence along with creativity to the midfield.

In the end, the Rapids should compete better this year, but they still may be a year or two behind in the rebuilding process.

Coming off a horrid season that saw the Earthquakes only win 4 times, ownership grabbed Argentinian Matias Almeyda as their new head coach in hopes that he can turn around their fortunes.

San Jose's largest problem was on the defensive end, although nowhere was really great. Nick Lima is there and is a budding star, but other than him, they will need large amounts of improvement.

As is the case for other teams in the west, the added playoffs spot makes anything possible, but a lot will have to go well for them to be the one who takes advantage of it.