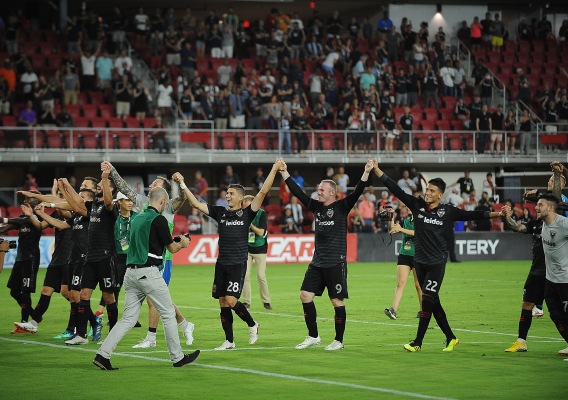 Week 20 was eventful in MLS. There is no way to get around it. Wanye Rooney made his debut for DC United but that was almost an afterthought. The big stories were the struggles of Audi Field, Petke unloading on officiating, and Toronto continuing to fade. Brian Sciaretta breaks it down
BY Brian Sciaretta Posted
July 16, 2018
4:00 AM
THERE WAS A lot going on this weekend in MLS: a new stadium, goalzos, a crumbling defending champ, and an epic rant against bad officiating.

Here are the top headlines from Week 20.


The big story over the weekend for American soccer was the opening of DC United’s new Audi Field in Washington, D.C. After 22 years at the crumbling but lovable RFK Stadium, DC United finally had a stadium to call its own. With its opening, all original MLS teams except for the New England Revolution have their own stadiums

The stadium looked beautiful from pictures but under the tough conditions of a capacity crowd, it didn’t hold up well with one DC United employee hurt by a piece of metal that fell off.


You can take the team out of RFK but you can’t take RFK out of the team https://t.co/nn8JNZUqXp

We will have to see how DC United responds in the coming days to quickly fix the problems but this is embarrassing to the club after all the hype and intrigue over the new stadium. Of course they were under tough deadlines to make this and soft-openings are generally preferred, but this did not play well.

On the field, the game couldn’t have gone any better for DC United. It featured great goals, terrific performance, the debut of Wayne Rooney, and a most importantly a 3-1 win over the visiting Vancouver Whitecaps.


The first ever goal at Audi Field... is a good one pic.twitter.com/eWeCs9lzVK

Wanye Rooney made his debut for DC United when he came on in the 58th minute and was active but the story for DC United was Paul Arriola who could be named MLS player of the week with two outstanding goals (the second of which was assisted by Rooney.


Despite three outstanding goals from DC United, the best might have come from Vancouver’s Canadian teenager Alphonso Davies who showcased his enormous talent at the very end of the game.


90' Here is the wonder-strike from the kid! Take a bow, Alphonso!

Overall, it was a great game for DC United. A new home, a great performance from its top American in Paul Arriola, a strong performance from its homegrown U.S. youth international Chris Durkin, and a new home The playoffs are likely out of reach but the future could be bright.

Let’s hope that the problems at Audi Field get fixed ASAP.


As well as Arriola performed for DC United, he might not be the MLS player of the week. The reason is that Marc Rzatkowski was phenomenal off the bench for the New York Red Bulls.

The German came off the bench in the 60th minute with the Red Bulls down 2-1 and equalized the game in the 72nd minute and then in the winner in the 80th minute. Both shots were rockets from outside the box and his first was set up with a terrific pass from U.S. international teenager Tyler Adams.


Plays like this are why it’s fun to watch the Red Bulls. Great assist and vision from #USMNT mid Tyler Adams. Exquisite finish from Rzatkowski pic.twitter.com/uzLnw4sCmW


Ok.. what’s a better goal tonight in MLS: Asad in DC or this Rzatkowski winner for RBNY? pic.twitter.com/SlfBbrKSKH

In the end, the Red Bulls would turn a 2-1 deficit into a 3-2 win. The Red Bulls, however, were not as sharp as they could or should be. In the first half, the Red Bulls were bailed out by Sporting’s inability to take advantage of bad mistakes. The worst being a bad backpass from U.S. international Tim Parker that gifted a 1v1 with the keeper that was misplayed.

There will be and adjustment period following the departure of Jesse Marsch and Chris Armas will have his work cut out for him but a win should be a nice confidence boost ahead of a winnable stretch in the schedule.


During the CONCACAF Champions League, it looked like Toronto was far beyond all other teams in MLS and it also seemed like Alex Bon had a legitimate case to be a U.S. national team hopeful – perhaps the top backup behind Zack Steffen.

Not even four months later, everything is wrong with how it seemed. Toronto has been absolutely terrible and Bono as not played like a national teamer. He has let in a bunch of bad goals and the opener in Saturday’s 2-1 loss to Orlando continued that trend.

This is a rebound he just can’t give up.


34' | GOAL! Chris Schuler with his first as a Lion off the Dom Dwyer rebound!

The loss likely makes Toronto the worst team in the Eastern Conference. If it wasn’t for San Jose, Greg Vanney’s team could be the worst in the entire league.

Yes the team has had bad goalkeeping and a ton of injuries, but the team’s defense has just been flat out bad. As a result, the entire confidence of the team is spiraling out of control and it is playing far below the sum of its parts. Even with injuries, it should be much further along.

There is no way a team that has lost nine in a row should break that stretch against Toronto. But if Toronto can’t beat Orlando right now, who can they beat?


Last week, New York City got past the Red Bulls when it capitalized on a bad turnover from Aaron Long (and a bad backpass from Tyler Adams). On Saturday night, it downed Columbus 2-0 thanks in large part to a bad outlet pass from U.S. national team goalkeeper Zack Steffen.

To be fair, Steffen made a bunch of very good saves in the game but he was responsible for the first goal that probably cost Columbus a chance at a point.

To New York City’s credit, they have played great defense under new coach Domènec Torrent. The offense has not been ideal but the team has taken advantage of bad mistakes.

As for Columbus, Gregg Berhalter’s team has one win and four losses in its last five and has fallen out of the top of the standings. The two New York teams and Atlanta a clearly above all other teams in the conference.

The problem for Columbus is strictly offense. Gyasi Zardes got off to a hot start this season but has now gone cold. The team has been shutout in four of its last five games. Newly acquired Patrick Mullins can be a good player at his peak but probably lacks the quality to change the fortunes of a club that can’t buy a goal.


On Saturday night, Real Salt Lake lost to Minnesota 3-2 and saw its grip on fourth place reduced to goal differential. In fact, the entire Western Conference playoff race and not much separates the teams.

Tensions are high and Real Salt Lake head coach Mike Petke was simply not happy with the officiating in the loss. Early in the second half, he believed Minnesota forward Darwin Quintero fouled Justen Glad on a play that lead to a Minnesota goal. Petke argued for the use of VAR but to no avail. After an argument, he was ejected.

But it went beyond that call. After the game, Petke spoke about the state of the officiating in this league in an epic rant.

"Why did I get kicked out tonight? You look at the 20th minute, which I checked at halftime -- Schuller goes in on Danny Acosta, who's in behind the midfield line, studs up, a foot off the ground, studs showing into his leg. If he is a foot to the left of Danny, face on, he breaks his leg. There's none of this crap that the referees do to the VAR -- no looking at VAR or nothing. It's a yellow card.

"Marcelo gets a yellow card what, 12 minutes later for toe-poking the ball during a set piece 15 yards away? I mean, what are we doing here? Quintero in the goal doesn't look at Justen -- I mean, doesn't look at the ball. Plays, literally, not the ball, runs in, extends his arm, looks at the last second and they score, and it's this [VAR] crap again."

Petke then added: “The only thing I get from MLS is: 'stop criticizing referees.' I want to know where the referees are right now. Why can't we ask a referee a question? Why can't we do that? Why can't we ask why you didn't go to VAR? Why didn't you call that? Why, when the studs are coming up, [are you] just giving a yellow card? That would make them more human. To MLS, it would be better for this league - for the fans, for the owners, for the coaches, and for the players to hear from them and hear their side of the story.

"Perhaps then we'll say: 'OK, I see it. Maybe that happened a little fast.' Maybe the guy in the booth, wherever the hell he is, watching this, maybe he's watching The Simpsons at the same time. I don't know. I have no idea. But it's not good enough to me. And I'll take the fine. Jeff Agoos, fine me. Fine me. I don't care anymore. No other coach in this league steps ups a little more than they should. But I'm going to. So drain my bank account. I don't give a shit anymore."

My take is that this is completely justified. Officiating in MLS needs to improve and it’s going to take more rants for people to start to demand better.


As a lot of American fans want to see young domestic players begin to raise their game in MLS. With that said, it was a very good weekend for young American players who are eligible for the upcoming U-23 Olympic team in 2020.

Reggie Cannon (FC Dallas): assist in a 3-1 win over Chicago.


Keeping an eye on the upcoming U.S U-23 Olympic team, this was a nice assist tonight from Reggie Cannon for FC Dallas who I think is the clear front runner to be the team’s starting right back https://t.co/VSYpiRHbeZ