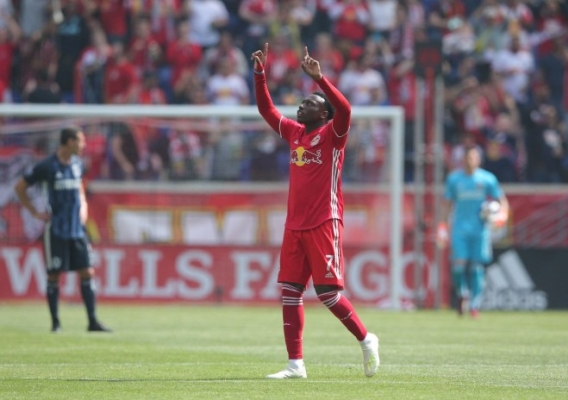 Some normalcy might be surfacing in the Eastern Conference as the Red Bulls and Atlanta are making positive steps forward - but dont sleep on Philly either. But what is to make of Sporting KC or the LA Galaxy. ASN's Brian takes a look
BY Brian Sciaretta Posted
May 06, 2019
10:00 AM
AFTER A BAD WEEK 9 in MLS, week 10 was a lot better as the Eastern Conference actually had the upper hand against the more-talented Western Conference. The games this past week were much better as well as the performances from some of the more interesting teams.

Atlanta and the Red Bulls each won their second straight. Are the two teams back on track or have they just riding a brief wave of success? Are Houston and San Jose actually good? Has Portland found its groove with its third straight win? How good is Philadelphia? Is it a team that can finally win a playoff game? New York City also has three wins and a draw in its last four games. Has Dome Torrent’s system and approach finally taken root?

On the flip side, some of the teams what were off to strong starts but are now facing questions. The seemingly unstoppable LAFC has just one win in its last four. Seattle has drawn three straight games. Columbus is a train-wreck.

This unpredictability is classic MLS, for better or for worse. Sure there are some reliable truths that everyone can agree. Colorado and New England are bad with very little hope. But let’s look at all of these big questions right now.


.@RapidsSouthStds says the players are having just as tough a time as the supporters, and this picture proves it #Rapids96 #COLvVAN https://t.co/MAG1DGmAoC pic.twitter.com/uh33psiUCs


In a highly entertaining game, the Red Bulls won their second straight game after an ugly stretch. Unlike the last win over a bad FC Cincinnati that can’t score against anybody, this one looked like the vintage Red Bulls of the past four seasons.

Chris Armas still has a lot to prove but he does show the ability to make key substitutions well. Omir Fernanez came into the game in the 54th minute and brought some much needed speed into the game. Derrick Etienne Jr. also came in to add even more speed and scored the winning goal. Armas can make interesting adjustments that change formation as well as introduce different skillsets.

The Red Bulls still need a lot of work. Brian White is an adequate backup as a central forward but he doesn’t address the concern over an aging and injured Bradley Wright-Phillips. Kaku is a disgruntled and suspended playmaker. In this era of MLS, teams need production out of its designated players. One good designated player which gets hot at the end of a season (like Diego Valeri and Portland) can get a team all the way to the final. The Red Bulls can tread water but the team will have to do something this summer.

As for the Galaxy, Matthew Doyle continues to point out that the team is on a streak where it fades in the second half of the season. Compared with last season, however, it’s still a remarkable improvement and all of its problems right now are first-world problems. It should be okay and Guillermo Barros Schelotto will probably be able to adjust as the season progresses. This Galaxy team is still a good playoff team.


The Philadelphia Union are sitting atop the Eastern Conference and it is hard to believe the fans booed head coach Jim Curtin at the start of the season. Curtin has done the best possible job with the roster he’s been given.

On Saturday, Philadelphia blitzed a hapless New England team 6-1 in Pennsylvania. The game was actually even at 1-1 heading into halftime but Philadelphia responded nicely with some key adjustments.

What is so impressive is that Philadelphia has been succeeding with Marco Fabian having played just 34% of the team’s total minutes. David Accam has played well when on the field but has also played under 35% of the team’s minutes. Mark McKenzie should eventually regain his role as a starting central defender but the preseason concussion as well as his appendectomy has eliminated his availability so far.

Now the team might have to do without rising teenage star Brenden Aaronson who had to come out of Saturday’s game in the first half with a hip injury.

The bottom line is that Curtin still has been winning with one hand tied behind his back. It will actually be a challenge for him once everyone returns. It is the complete opposite of Sporting Kanas City which seems to struggle mightily when injuries hit.

On the other hand, for New England, there is no more depressing team to play for in this league. Some might argue Colorado, and that’s fair. Colorado has some major problems. But Colorado has a stadium and some interesting players but New England has even less ambition than Colorado. It is a throwback to the early days of the league.


After a lackluster 1-0 victory over Colorado, Atlanta had its best win under Frank de Boer on Sunday with a 3-0 win over Sporting Kanas City on the road. Sporting Kansas City has been in a tailspin but it was still a huge improvement.

Atlanta has a lot of talent and if the coach can just put the designated players Josef Martinez, Pity Martinez, and Ezequiel Barco in a position to succeed, then they’re going to win a lot of games with also a fairly talented supporting cast. That has been a challenge but things might be coming together for Frank de Boer. He doesn’t have Miguel Almiron but he is getting more from Barco and Pity Martinez will only get better (he couldn’t get any worse) because he is extraordinarily talented.

Atlanta might not win the title again but it should make it to the playoffs just on talent.

As for Sporting Kansas City, the team is bleeding goals right now with 11 goals conceded in its last three games. It’s backline is old and the team doesn’t function well without injuries. Vermes is a good coach but he has benefited from an established core of defenders and defensive midfielders. With those players aging, weaknesses are beginning to come to light. Sporting looks like a team with some real problems. A trip to DC United next weekend is not an easy task.


Both the Houston Dynamo and San Jose have shown massive improvements since last season. In particular, San Jose once looked even worse off towards the end of March.

With regards to San Jose, the club lost its first four games of the season in ugly fashion. Since then, the team has shown a lot of progress. In its last six games, it has three wins, two draws, and a loss. Two of the draws came on the road against likely playoff teams in Dallas and Seattle.

The team shows confidence which is reflective of its growing faith in head coach Matias Almeyda. On Saturday, the team had to play down a man for 40 minutes and was able to preserve the cleansheet victory.

After a nice January camp, Nick Lima struggled at the start of the season but has been important to the team’s turnaround by playing up to his usual self. Jackson Yueill also looks like he could be a key cog for the U.S. U-23 team in the midfield.


It’s fair to recognize that Cincinnati is a horrible team that can’t score. It was built with little vision and without any difference makers. But San Jose did what it had to do. It’s tough to say that San Jose will all of a sudden become a threat in a very good Western Conference but the improvement is noticeable and the team is trending upward.

As for Houston, there is more talent and the team should be taken seriously these days. 19 points through eight games is an outstanding pace. The team did not need a major upgrade over the offseason as Mauro Manotas and Alberth Elis are a strong core but the team has improved in some key areas. Memo Rodriguez is playing very well with four goals and an assist. His play complements the rest of the attack nicely.

Does Houston have the depth in a more congested schedule? We will see but their progress should encouraging for Dynamo supporters.


Columbus was both robbed of a goal by the officials and the deserved loser in a 3-1 loss to DC United – the team’s fifth straight loss. The team, which consists of three national team players, is playing bad soccer and Caleb Porter might be dangerously close to losing this team.


Columbus scored a goal, but it was called back after Ted Unkel determined that Wil Trapp fouled Acosta on this play.

In the loss, a Columbus goal was called back through VAR after a harsh decision was made that Wil Trapp committed a foul in the buildup. On the replay, it showed that the referee was the one who got in the way of the play. It was bad luck, but that shouldn’t bail out Columbus. The best case scenario is that it can be used to motivate the team but Columbus is just a mess and the Galaxy is not the team it wants to face on Wednesday.

That being said, the officiating cannot be the joke it was in this game.